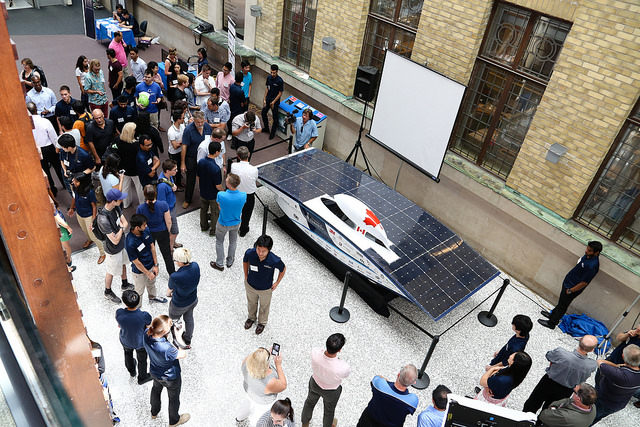 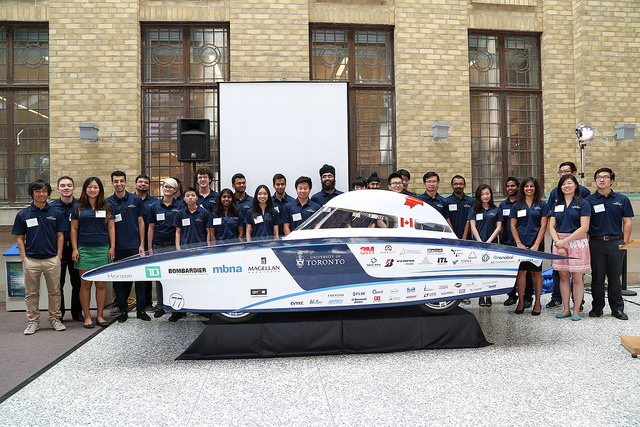 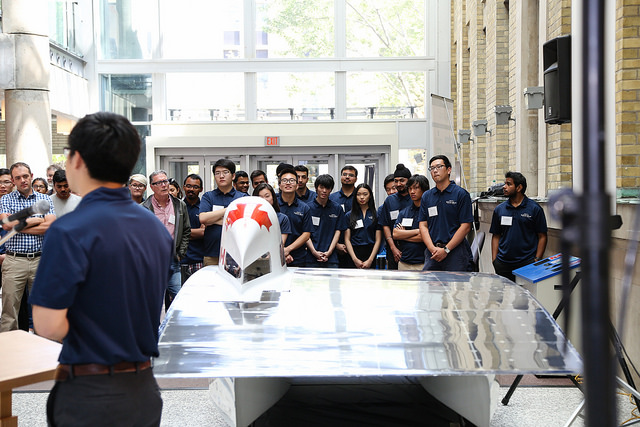 With the sun beaming down on its solar surface, Horizon looked poised to tear off its platform and hit the road.

The team, composed of a multidisciplinary group of undergraduates from across U of T Engineering, has been working relentlessly over the past 18 months toward competing at the 2015 World Solar Challenge competition in Australia.

“This vehicle is the fruits of our collective labour,” said Zhe Gong (ElecE 1T4+PEY), the team’s managing director. “To us, Horizon represents the distance between what is currently the case and what could be in the future.”

For Horizon, the future is coming up fast: with just over a month until they ship out to competition, it’s crunch time. In the next few weeks they will install, calibrate and test the electrical systems, brakes, steering and cockpit, then hit the pavement for extensive road tests.

“We definitely have more obstacles ahead of us this time,” said Maria Xie (ElecE 1T6+PEY), one of the team’s electrical leads. “The competition is tougher, and a lot of the specs are much stricter. But we’re also better prepared.”

The World Solar Challenge will pit 42 teams from around the globe in a gruelling race to prove they’ve built the world’s most efficient electric car. Powered only by the sun’s rays, they will drive their custom vehicle 3,021 kilometres north-to-south across Australia, starting in Darwin and finishing in Adelaide.

The 2015 World Solar Challenge runs from October 18 to 25. The University of Toronto’s Blue Sky Solar Racing is the only Canadian team registered. The team recently launched an Indiegogo campaign to help cover the travel costs associated with participating in the race.

“I see the Blue Sky Solar Racing team as a great ambassador for the Faculty, showcasing the best of what we do here at UofT,” said Professor Thomas Coyle, vice-dean, undergraduate for the Faculty of Applied Science & Engineering. “It’s something that I think all of us in engineering recognize requires an incredible amount of work…this team is an inspiration to us all.”

For Jerry Song (MechE 1T7), the Blue Sky Solar Racing team was one of the draws to UofT Engineering. “I wanted to get involved in something meaningful,” he said. ” It’s been a really challenging and motivating experience. Right now there’s a lot of pressure on us, but we’re going to do the best we can.”

Blue Sky Solar Racing cracked the top 10 at the 2013 World Solar Challenge, with an eighth-place finish. In that race their vehicle, B-7, crossed the line in 45 hours and 38 minutes, achieving an average speed of 65.71 km/hour. Xie says that this year they’re hoping to hold onto the top 10, but it’s an ambitious target.

“For us the goal has always been to finish this car, go to the race, and finish the race,” said Gong. “But this story is not over—stay tuned for the end.”