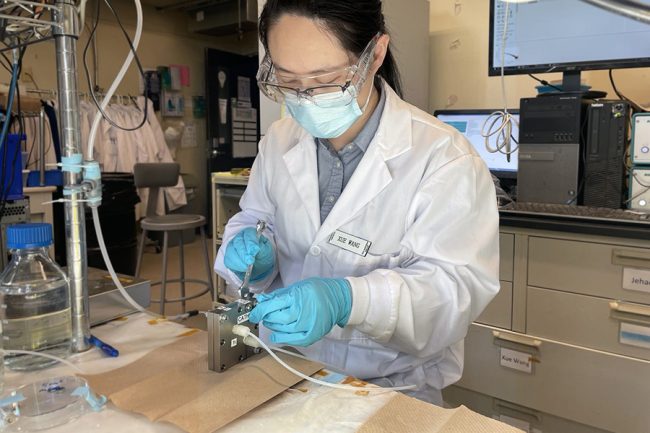 February 10, 2022
Dr. Xue Wang, a postdoctoral researcher in the lab of Professor Ted Sargent (ECE) installs a new electrocatalyst, made of copper doped with silver and ruthenium, that can efficiently convert waste carbon into 1-propanol. The innovation could offer a new path to upcycling captured carbon. (Photo: Geonhui Lee)

Researchers at U of T Engineering have designed a new catalyst that can efficiently convert waste carbon into 1-propanol. The innovation could offer a more sustainable route to manufacturing high-value commodity chemicals, and a boost to the emerging field of carbon capture and upcycling.

“Work from our group and others has shown that we have the technology to capture waste carbon and upgrade it into commodity chemicals,” says Professor Ted Sargent (ECE), who led the multidisciplinary team along with Professor David Sinton (MIE).

“But proving that we can do it isn’t enough: we also need to show that our methods are cost-effective, and that they address real industry needs. Our new technique for making 1-propanol illustrates how we can offer a strategic advantage over the status quo.”

1-Propanol is valuable on its own as a solvent and a component in high-performance engine fuels. However, it can also be easily converted into propylene, another commodity chemical which is used to make everything from durable plastics — such as those used in reusable water bottles, outdoor clothing, auto parts and more — to personal care products and detergents.

With a market value of more than $84 billion US, propylene is among the most widely-produced commodity chemicals in the world. But lately, it has been squeezed by both rising demand and falling supply.

“In the past, propylene was produced mainly as a byproduct of naphtha steam cracking for ethylene production,” says Dr. Xue Wang, a postdoctoral researcher in Sargent’s lab group and lead author of a new paper published today in Nature Energy.

“However, the rise of shale gas extraction has resulted in the expansion of an alternative ethylene production process, one that produces much less propylene as a byproduct. So the supply of propylene is falling at exactly the same time that demand is rising, creating a gap.”

In the paper, the team outlines a new way to bridge that gap using an electrically driven chemical reaction. At the heart of the innovation is an electrocatalyst made of copper, silver and ruthenium. When carbon monoxide (CO) and water arrive at the surface of this catalyst, they undergo a series of electrochemical reactions that result in the production of 1-propanol.

“There are already established and cost-effective ways to convert CO2 to CO, as well as 1-propanol to propylene,” says Josh Wicks, a PhD student in Sargent’s lab group. “The missing link in the chain was going from CO to 1-propanol. That’s what Dr. Wang and the rest of the team have now demonstrated.”

The innovation builds on the team’s previous work designing catalysts to convert waste carbon into other chemicals, including ethylene. Wang says that part of the challenge stemmed from the fact that 1-propanol contains three carbon atoms, whereas ethylene contains only two.

The catalyst design was informed by theoretical calculations. Using a chemistry concept known as density functional theory, the team built computer models to test out several potential combinations of metals. This helped them narrow the field to those that were most likely to be effective. The theory was then validated by building a physical prototype in the lab.

Though it is not the first electrocatalyst capable of converting CO to 1-propanol, its performance offers significant improvements over the competition. In the paper, the team reports that its selectivity — the proportion of electrons which end up as part of a 1-propanol molecule, as opposed to some other side product — was 36%, achieved with a current density of 300 milliamperes per square centimetre of catalyst.

“This is about twice the selectivity of previously published catalysts,” says Wang. “The current density, which is a measure of how fast we are producing 1-propanol, is about three times as high.”

The team also carried out a technoeconomic analysis of the system to predict the financial viability of the process if it could be brought up to an industrial scale. The analysis assumed a price for CO that factored in the cost of producing it from captured CO2, as well as a price for electricity that takes account of renewable generation. The model predicted profitability.

“Going forward, we will work to further increase the selectivity and production rate,” says Wang. “And we could benefit from incentives for recycling carbon. But what our analysis showed is that even without all of that, our process as it stands can still make a profit. That was very interesting and exciting for us.”