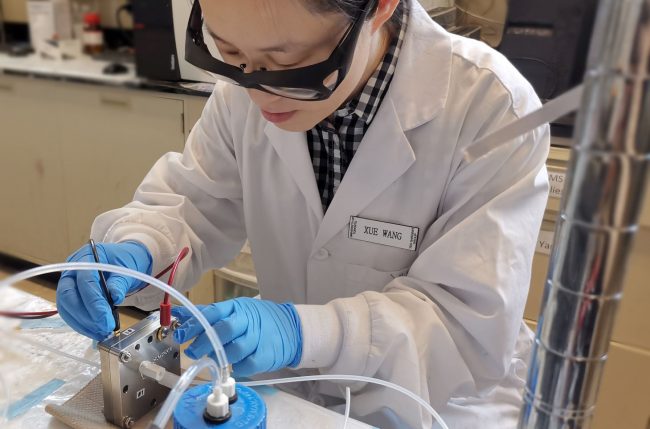 July 22, 2020
U of T Engineering postdoctoral fellow Xue Wang installs a membrane electrode assembly cell for testing the performance of a catalyst. Made by coating copper with a layer of carbon-doped nitrogen, the catalyst is designed to efficiently convert CO2 into ethanol. (Photo courtesy Xue Wang)

Researchers from U of T Engineering have used the Canadian Light Source (CLS) at the University of Saskatchewan to improve their techniques for converting CO2 into ethanol, a valuable chemical that can be used both as a fuel and in a variety of industrial applications.

Ethanol produces fewer emissions when compared to gasoline, but the renewable fuel is most often made from corn and wheat so there is a strong interest in non-food production methods. By capturing and converting carbon emissions to ethanol, the fuel’s environmental benefits could be multiplied.

The research team led by Professor Ted Sargent (ECE) focused on producing chemicals through CO2 conversion—such as ethanol, ethylene and methane—helping to transform harmful greenhouse gases into useful products. The group aims to produce the target chemicals, in this case ethanol, with high outputs and minimal energy inputs.

The ethanol project is sponsored by the Canadian energy company Suncor, which invests in cleaner, renewable fuel sources, the Natural Sciences and Engineering Research Council (NSERC) of Canada, and the CIFAR Bio-Inspired Solar Energy program. If successful, more Canadian renewable fuel like ethanol could be created from greenhouse gases and less from farmed food.

In a recent paper published in Nature Energy, the team studied ethanol production by developing catalysts through overcoating copper with nitrogen-doped carbon (N-C/Cu). To understand how the catalysts work and provide valuable information for fine-tuning its efficiency, they studied the structure and chemistry of catalysts using the SXRMB beamline at the CLS.

They discovered that gaps below 1 nm between the Cu and N-C layers may act as a reactor during CO2 to ethanol conversion, a property that could be harnessed to maximize output.

“We also found that the nitrogen-doped carbon layer is very important for producing ethanol because it can promote the reaction’s selectivity to ethanol,” said Xue Wang, a postdoctoral fellow in Sargent’s group.

Wang explained that ethylene and ethanol, two valuable chemicals that can be created from CO2, are derived from a shared key intermediate (HOCCH*) in the conversion reaction, but the end result depends on whether C-O bond-breaks from HOCCH*, which results in ethylene, or stay stable, which results in the desired product ethanol.

“Our goal is to suppress the C-O bond breaking from HOCCH* so less ethylene will be produced. We found that this catalyst is very efficient for creating ethanol,” Wang said.

The researchers also discovered that the N-C/Cu catalyst is a strong and stable system, which is necessary for potential commercialization. In their experiments, they achieved 15 hours of stability at 52 percent Faradaic efficiency (FE) with a full cell energy efficiency (EE) of 16% in creating ethanol. The researchers aim to further improve the selectivity to ethanol, production rate, EE, concentration of ethanol and operational stability in order for the system to be used successfully in industrial applications.

This story originally appeared on the Canadian Light Source website.