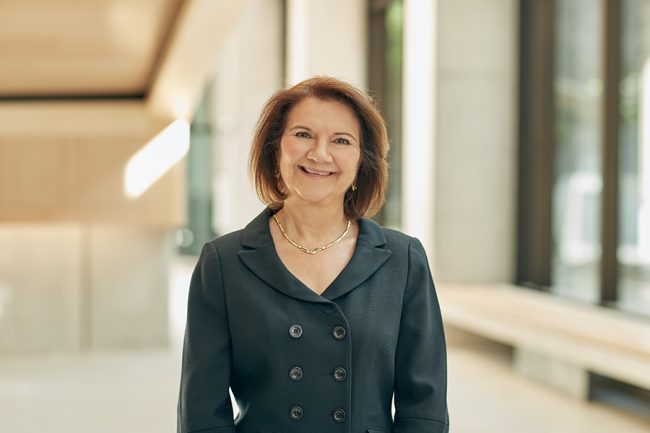 November 20, 2019
Dean Emerita Cristina Amon is one of 12 selected in the category CIBC Trailblazers and Trendsetters. (Photo: Daniel Ehrenworth)

The Women’s Executive Network (WXN) has announced its list of Canada’s Most Powerful Women: Top 100 for 2019, and Dean Emerita Cristina Amon (MIE) is one of 12 selected in the category CIBC Trailblazers and Trendsetters.

The list recognizes the country’s highest achieving female leaders in the private, public and not-for-profit sectors.

“During her term as dean, Cristina Amon had a transformative effect on this Faculty. She championed equity, diversity and inclusion among students and faculty, while her leadership enabled innovative educational and research programs,” says U of T Engineering Dean Christopher Yip. “On behalf of the Faculty, my warmest congratulations to her on this well-deserved honour.”

Amon served as dean of U of T Engineering from 2006 to 2019. As the Faculty’s first woman dean, she increased both the presence and leadership of women and other underrepresented groups in science, technology, engineering and math (STEM).

For the past three years, the first-year cohort at U of T Engineering has been 40% women; this year’s cohort is 42% women, up from 20% in 2006 and the highest percentage in Canada. During Amon’s deanship, the number of women faculty members tripled, from 19 to 57. Nearly 40% of the Faculty’s Canada Research Chairs are now women, compared to 10% in 2006, and women lead many multidisciplinary research centres and institutes at U of T Engineering.

Under Amon’s leadership, the international profile of U of T Engineering has risen to be known as one of the world’s top public engineering schools in all international rankings.

This is due in large part to her successful efforts to foster multidisciplinary research and education, equipping graduates to be innovators and leaders. Amon spearheaded a new emphasis on design education, establishing the University of Toronto Institute for Multidisciplinary Design & Innovation (UT-IMDI) and multidisciplinary capstone design initiatives in partnership with industry.

Beyond the classroom, she created programming which offers students opportunities to develop the leadership, multidisciplinary teamwork, entrepreneurial, global and business competencies necessary to be at the forefront of technological and societal prosperity.

She established multidisciplinary initiatives to accelerate innovation and foster a culture of collaborative research excellence, including the creation of centres and institutes such as BioZone, the Robotics Institute and the Centre for Analytics and Artificial Intelligence Engineering (CARTE).  Key to this was the Faculty’s new building, the Myhal Centre for Engineering Innovation & Entrepreneurship, for which she led the design and fundraising.