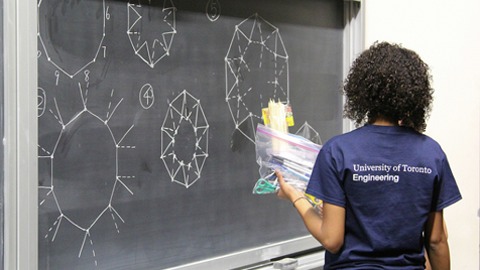 May 12, 2014
Those that excel on the MCAT didn't take pre-med, physiology or biology, they took physics and electrical engineering (Photo: Ryan Mallough).

Always dreamed of being a doctor, lawyer or business leader? Try taking physics, math and engineering.

Students who score highest on the MCAT – the standardized exam for entry to medical school – are those who didn’t take pre-med, physiology or even biology, said Damian Pope of the Perimeter Institute of Theoretical Physics. Instead, they took physics, math and electrical engineering.

The same holds true for the LSAT, the law school entrance exam, and GMAT, for business school, he told the 2014 conference of the Ontario Association of Physics Teachers (OAPT), hosted by The Edward S. Rogers Sr. Department of Electrical & Computer Engineering.

A solid education in science, technology, engineering and math, called “STEM disciplines”, is the best background a student could bring to any 21st-century career, Pope told physics teachers from across Ontario who had gathered to discuss novel approaches to STEM education, from high school through university.

In her keynote address, Schmidt pointed out that only 27 per cent of 16 to 18-year-olds believe science has relevance in their everyday lives, and only 11 per cent of Ontario students take Grade 12 physics. Meanwhile, more than 50 per cent of undergraduate students in China are studying science or engineering. “Kids’ perception that science takes place in a laboratory is an impression we have to change,” she said.

Students were the focus of every discussion—how can teachers engender fascination in science and technology, improve retention and lead their students to fulfilling careers? “I would leave you with a challenge,” said Dave Fish, a teacher at Sir John A. MacDonald Secondary School in Waterloo, Ont. who also works on outreach with Perimeter Institute. “How are you preparing students for the world? For careers, yes, but what about as global citizens?”

Professor Micah Stickel, director of outreach for ECE and First Year Chair for the Faculty of Applied Science & Engineering, led a session on his experience teaching with an inverted classroom approach. An inverted classroom has students introducing themselves to new material in video tutorials at home, then coming to class prepared for discussion and problem-solving activities. “It’s really the learner who creates their own meaning, and if they don’t create it, it won’t be with them in six months,” said Professor Stickel.

Professor George Eleftheriades led a session about his electromagnetics work, and Professors Nazir Kherani, Olivier Trescases and Zeb Tate gave an overview of their work within the context of energy research in ECE. Professor Stewart Aitchison and Willy Wong closed out the day with a session on their activities in photonics and biomedical engineering.

“For me, the beautiful thing about this conference is that it’s an opportunity for me to engage with a group that I don’t normally get to talk with and that I really love to,” said Professor Stickel.

“Our primary goal is to provide teachers with opportunities to network, to build a community of physics educators,” said Lisa Lim-Cole, vice-president of the OAPT and conference organizer. “We need to recharge that motivation of why we teach, and in this environment we can inspire each other.”

The OAPT organizing committee received enormous support from the Engineering Outreach Office. Next year’s event aims to expand the scope even further to consider best approaches to STEM education in Grades 7 and 8.