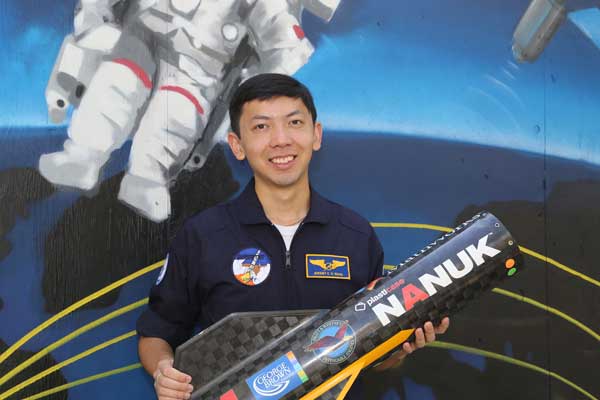 Fourth-year Engineering Science student Jeremy Wang is about to embark on an out-of-this-world journey. He is one of just ten students — only three of whom are undergraduates — to be selected as part of the Canadian Space Agency’s official delegation to the 2016 International Astronautical Congress (IAC) in Guadalajara, Mexico.

“It is the largest gathering of all the world’s top space professionals, researchers, policymakers, even heads of state,” says Wang. “Everybody you could hope to meet, talk to or want to learn from is going to be there.” Wang will be joined by fellow U of T undergraduate student and University of Toronto Aerospace Team (UTAT) member Kate Harris of the Department of Astronomy and Astrophysics, as well as eight other graduate and undergraduate students from across Canada.

Wang is the executive director of UTAT, one of Canada’s largest and most technically diverse design teams, which this year fielded teams in half a dozen national and international aerospace design competitions. “We build drones, rockets and satellites, and we run a number of outreach initiatives,” he says. “It takes a lot of management and international partnerships to keep it all going.”

In addition to his duties as executive director, Wang is also senior engineering designer with UTAT’s rocketry division. At IAC, he will be presenting two papers about the design and testing of the engine for this year’s rocket, named Deliverance. This past June, UTAT placed third worldwide and first in Canada in the Advanced Category of the Intercollegiate Rocket Engineering Competition, the world’s largest university rocket engineering competition, held in Green River, Utah.

The team’s design was an unusual “hybrid” rocket engine, in which the fuel was solid, but the oxidizer used to make it burn efficiently was a liquid. This required innovative computer modelling and simulations to predict how the rocket would perform. “Traditional models aren’t really meant to handle the kinds of physical phenomena that take place inside an engine like this, but we were able to accurately predict key performance parameters,” he says.

Wang is also presenting a paper on the feasibility of using a “space tug” to help reduce the cost of launching satellites into geosynchronous orbit, more than 35,000 km above sea level. The idea is to use rockets to boost satellites into low Earth orbit and then use a remote-controlled spacecraft to lift them the rest of the way, much as a tugboat moves ships in a harbour. Wang conducted an analysis in collaboration with the Space Generation Advisory Council in support of the UN Programme on Space Applications. “Our calculations showed that if the satellites belong to a certain mass bracket, using a small rocket and a tug may be more efficient that the traditional use of a larger rocket,” he says.

Wang is currently completing a PEY internship with The Sky Guys, an Oakville-based startup that supplies drones and aerial photography services for sporting events, inspecting industrial sites and a variety of other applications. He is grateful to his employer for allowing him the time to attend, as well as the Canadian Space Agency for providing the funding he needed.

“It is such a privilege to represent Canada at an international venue like this. Conferences are a great place to kickstart new collaborations and become integrated with the world’s innovation infrastructure,” says Wang.