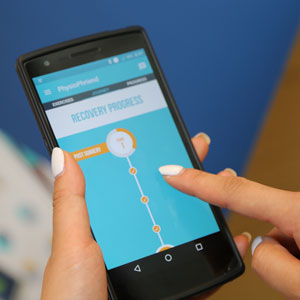 Fifty-three student startups have been accepted into the 2016 cohort of U of T Engineering’s Entrepreneurship Hatchery accelerator program, the highest number since the program began in 2012.

The record was marked at this year’s Hatchery kickoff event on April 29, when more than 100 experienced business professionals and Hatchery team members past and present gathered for an evening of networking, mentorship and entrepreneurial evangelism. The products on offer included everything from new medical devices to lifestyle apps.

“The ideas that you are advancing here as part of this program will improve our lives and will transform our society,” said Joseph Orozco, executive director of the Hatchery, at the kick-off event. “Good luck, and keep on sharing the entrepreneurial spirit.”

More than 150 companies have entered the Hatchery since its inception. Each summer, teams have access to business space and fabrication facilities that enable them to build a minimum viable product. They receive advice from mentors on how to refine their business plans, and regularly pitch their ideas to peers and experts who can give them feedback on how best to attract potential clients and investors. In September, selected teams make their final pitch at Demo Day, competing for a share of more than $40,000 in seed funding.

Here are three Hatchery startups — both starting out and on their way — to watch:

During his undergraduate degree, Rahul Goel (EngSci 1T6) gave a lot of presentations, but he felt his was missing an opportunity to learn from them. “There would often be dozens of people in the room, but we would only get evaluated by the professor or teaching assistant,” he says. “I wanted to create a tool that makes it easier to close the feedback loop.”

Goel and his business partner, Phil Isaac (EngSci 1T6), brought their idea to the Hatchery in 2014. The resulting platform, PheedLoop, allows any presenter to get live, anonymous feedback from audience members via their smart phones by providing a single web link. Because there is no app to download, PheedLoop is easy for anyone to use, regardless of which tablet or mobile device they have.

“The Hatchery was really instrumental in the growth of PheedLoop, and we came out with a much stronger sense of the market we are after,” says Goel. “The most important part was getting connected with our mentor, Mark Graham, founder of the promotional products companies RIGHTSLEEVE and commonsku. He’s a super patient guy who listened to what we were working on and helped us figure out the right answers.”

By the end of the Hatchery season, PheedLoop had its first customer, a small technology conference in Toronto called DSrupted 2014. Soon after that, it was used at a monthly event called Benefits Excellence LiVE in London, U.K. From there, PheedLoop began to make its way into other conferences around the world — one of the biggest so far has been Microsoft Canada’s 2015 annual general meeting.

Since graduating from the Hatchery, Goel and his team have focused on adding new functions to PheedLoop, such as live polling. PheedLoop can also handle conference logistics, telling attendees which sessions are happening at a given time or location. It even integrates with LinkedIn, Facebook and other platforms to help speakers and attendees connect after the meeting is over.

Now that Goel and Isaac have graduated from U of T Engineering, PheedLoop has become their full-time job. “The eventual goal is to make it an end-to-end solution,” says Goel. “It will handle promotion, selling tickets, engagement during the conference and post-event follow-up. It will be a one-stop shop.”

Nirtal Shah, a physiotherapist at U of T’s David L. MacIntosh Sport Medicine Clinic, wants to increase the chances of full recovery after surgery to repair the anterior cruciate ligament (ACL) in the knee. PhysioPhriend may provide the answer.

“Currently, patients receive a few sheets of paper from their surgeon and take that to their physiotherapist,” says Shah. “Ideally it should be a living document, something that’s with them all the time and can track their progress.”

In 2015, Shah brought his idea to ECE 1778 Creative Applications for Mobile Devices, a graduate course taught by Professor Jonathan Rose (ECE), where computer science students Alaa Abdulaal and Pirave Eahalaivan developed the first iteration of PhysioPhriend. “The initial app was kind of like a checklist,” says Shah. “Now the goal is to make it much more interactive.”

From January to April, Shah worked with another group of students — Harris Chan, Fionna Gan, Annie Mao and Sherry Shi (all EngSci 1T5 + PEY) — through ESC 471 Engineering Science Capstone Design. The team added additional functions, such as using the gravity sensor found in most smartphones to measure the range of movement available to the patient.

“Just by slipping the phone into your sock, you can measure and track your progress,” says Mao. “We built a web portal that allows both the patient and the physiotherapist to access this data, and a messaging feature that allows them to talk to each other.”

After the course, the team successfully pitched their idea as a startup to the Hatchery. Over the next few months, they plan to further refine the product and the business plan, with Shah acting as one of their mentors.

“The cost of physiotherapy for an ACL reconstruction is already around $3,500 to $4,000,” says Shah. “If we can help augment the process and improve outcomes, I think people would be willing to pay for it.”

Juras says he was inspired while working on a project for the Public Health Agency of Canada. “If you have vitamin or mineral imbalances, you’re not going to feel as well,” says Juras. “We thought that if you could create a food that contained all the nutrients you need, it would help support mental and physical health.”

Alksnis and Juras spent months in their kitchen perfecting a formula that would not only be nutritionally complete, but also taste good. “It’s like really tasty chocolate milk,” says Alksnis. The product is available for sale through the company’s website.

Over the next few months, Alksnis and Juras hope to take Hol Food to the next level. “Right now we meet all of the recommended daily intakes in Canada’s Food Guide, but we want to make it into a nutraceutical product, adding ingredients that can bring further mental and physical health benefits,” says Juras. “We also want to scale up massively, and the Hatchery can help us with that.”