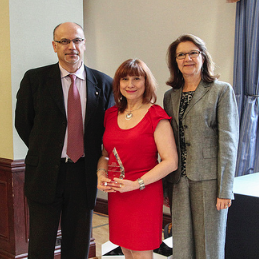 Five engineering educators across all stages of their careers have been honoured by the Faculty for excellence in teaching.

Assistant Professors Jason Anderson (ECE) and Timothy Chan (MIE) both garnered an Early Career Teaching Award, which recognizes an instructor in the early stages of his career who has demonstrated exceptional classroom instruction and teaching methods.

Associate Professor Evan Bentz (CivE) received the Faculty Teaching Award, for a teacher who demonstrates outstanding classroom instruction, develops and uses innovative teaching methods and goes above and beyond to ensure the best possible learning experience for students.

Professor Tarek Abdelrahman (ECE) was the inaugural winner of the Sustained Excellence in Teaching Award, recognizing someone who has demonstrated excellence in teaching in the Faculty over a sustained period of time.

Aaron Persad received his Bachelor’s degree and Master’s degrees from U of T and is currently a PhD candidate in MIE. While Aaron’s research field is thermodynamics, his varied interests have led him to teach across a number of areas, including mechatronics and communications. Aaron has served as a TA for MIE’s capstone mechatronics course for the past five years. In his first year, he successfully lobbied for 24-hour student access to the lab and supervised several extra lab sessions on his own time. Due to his efforts and his unique one-on-one approach to instruction, the robots designed by the students had a 100 per cent success rate for the first time in this course. Aaron had a paper on his teaching methods published in the Proceedings of the 2012 Engineering Education Association Conference.

Jason Anderson received his PhD in Electrical and Computer Engineering from U of T in 2005 and joined the faculty in 2008. Since that time, he has won four ECE teaching awards, one in each of his first four years as a professor. This unprecedented achievement is particularly notable as he teaches large compulsory first- and second-year courses. In 2009, Jason was nominated for the TVO Best Lecturer Competition. Most recently, he received the Gordon R. Slemon Award for Excellence in the Teaching of Design. In addition to his outstanding classroom teaching, Jason has been an exceptional mentor for undergraduate student theses and summer projects. He has co-published five refereed conference papers and one refereed journal article with his undergraduate mentees.

Timothy Chan joined the faculty of the Industrial Engineering program in 2009, after spending two years in a global management firm. He has used his industrial experience to place the concepts he teaches in a “real-world” context, applying the material to areas such as health care and sustainable design. As a result, his courses are extremely popular – enrolment in the Facility Planning course he teaches has doubled in the last three years. Tim also uses a number of innovative teaching methods; a paper on the game he created to teach students decision making under uncertainty has been accepted for publication in the premier educational journal in his field. Tim organizes the annual Operations Research Challenge and serves as Faculty Advisor for the U of T Operations Research Group.

Evan Bentz received his PhD from U of T in 2000 and immediately joined the faculty of the Department of Civil Engineering. Since that time he has received three teaching awards from the Department and won the Faculty’s Early Career Teaching Award in 2005. Evan’s contributions to the Faculty’s educational mission go beyond his excellent classroom teaching. He was instrumental in establishing the structural engineering curriculum for the Infrastructure Engineering option (one of EngSci’s most popular options), and designed one of its fundamental structures courses. Evan has also developed five computer programs that are used around the world for teaching. One of these programs, Response-2000, has been downloaded by more than 36,000 engineers, students and educators.

Since joining the Faculty in 1991, Tarek Abdelrahman has established himself as one of the Faculty’s most dedicated and talented teachers. He is particularly known for his interactive lectures and superb ability to generate class discussion. Tarek has received the ECE teaching award five times (a record in the Department) and won the Faculty Teaching Award in 2008. A leader in curriculum development, he created two fundamental undergraduate courses which have significantly improved the programming skills of ECE students and are now integral to the Department’s curriculum. Tarek has also been a role model and mentor to his junior colleagues; setting a high standard and helping young professors to improve their teaching skills.

“These outstanding educators share a passion for teaching and mentoring which inspires not only their students but their fellow teachers as well,” said Cristina Amon, Dean, Faculty of Applied Science & Engineering. “I congratulate them and thank all our teaching staff for their efforts in creating an exceptional learning environment for our students”.