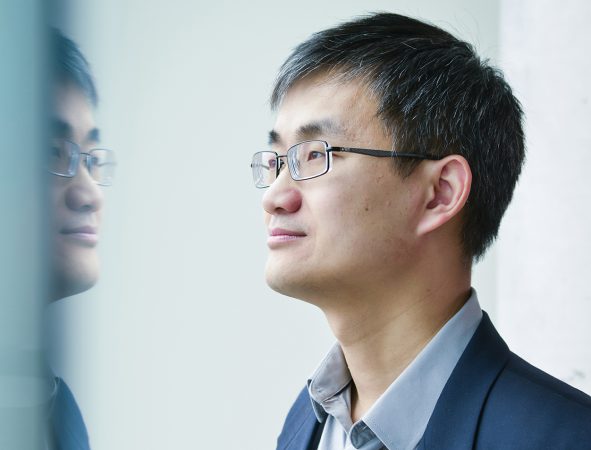 Your smartphone may keep getting smarter, but its network is struggling to keep up.

Demand for fast, cheap and plentiful data continues to surge, but wireless communications infrastructure is reaching the limits of what it can provide to users—unless we can find more efficient ways to engineer our networks.

Professor Wei Yu (ECE) is doing exactly that. A professor in The Edward S. Rogers Sr. Department of Electrical & Computer Engineering, Yu has been awarded a 2015 E.W.R. Steacie Memorial Fellowship from the Natural Sciences and Engineering Research Council (NSERC).

The award allows researchers who show extraordinary promise to focus on their research, relieved of teaching and administrative duties for a two-year term. Each Fellow receives a research grant of $250,000. Up to six Fellows are named each year, and received their awards from the Governor General of Canada, David Johnston, at a ceremony at Rideau Hall in Ottawa on February 17, 2015.

“Being able to focus on research one-hundred per cent of the time is hugely important,” said Professor Yu. “The Steacie Fellowship makes it possible for me to recruit the best students and post-docs to my research program to help develop the next generation of wireless technologies.”

Professor Yu’s work tackles the design and optimization of wireless communication systems. “I’m passionate about information theory, which is the mathematical foundation of modern digital communications,” he said.

Yu is currently investigating novel ways that base-stations and smartphones in a radio-access network may cooperatively transmit and receive information to and from each other, in order to enhance signal quality and to reduce interference for wireless data access. His discoveries have impact on the network architecture, transceiver design and network deployment for future generation wireless cellular services.

Professor Yu’s work is already hugely influential—in 2014 he was named to Thomson Reuters’ rankings of the most highly cited scientific researchers in the world. He is a Fellow of the IEEE, and currently holds a Canada Research Chair in Information Theory and Wireless Communications.

“Wei Yu is known internationally not only as an exceptional scholar in the communications field, but for the applicability of his work to engineering practice,” said Professor Farid Najm, chair of The Edward S. Rogers Sr. Department of Electrical & Computer Engineering. “We are extremely proud and gratified to see him recognized with one of the most prestigious research awards in the country.”

“My congratulations to all our NSERC award winners,” said Professor Vivek Goel, U of T’s vice president of research and innovation. “They are conducting both fundamental research that is pushing the boundaries of human knowledge and applied research that will improve health and quality of life worldwide in the coming years. We are grateful to NSERC for this recognition of and investment in U of T researchers.”