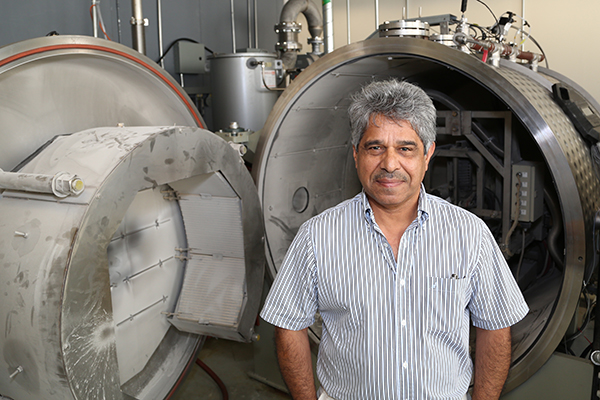 September 7, 2016
Professor Javad Mostaghimi (MIE) has been elected a fellow of the Royal Society of Canada, one of the highest honours a Canadian researcher can achieve. (Photo: Tyler Irving)

U of T Engineering Professor Javad Mostaghimi (MIE) has been elected a Fellow of the Royal Society of Canada, one of the highest honours a Canadian researcher can achieve. The Society’s mission is to recognize scholarly, research and artistic excellence, to advise governments and organizations, and to promote a culture of knowledge and innovation in Canada. New Fellows will be formally inducted at the Society’s Annual General Meeting in Kingston, Ontario on November 18.

Recognized by U of T as the Distinguished Professor in Plasma Engineering, Mostaghimi’s work relates to surface treatment through the deposition of plasma sprays, including contact of liquid droplets with heated surfaces. He has conducted groundbreaking research on simulating the dynamics of droplet impact and solidification in thermal spray coating processes, which are widely used in manufacturing. Mostaghimi has also worked extensively with industry partners in several disciplines and commercialized his work through numerous patents and three spin-off companies.

Mostaghimi is the founding director of the Centre for Advanced Coating Technologies (CACT). With a multidisciplinary team of more than 30 researchers, CACT is one of the world’s leading research centres in the area of thermal spray technology, which is integral to the aerospace, automotive, power generation and resource extraction industries. In 2010 Mostaghimi and his colleagues at CACT received the NSERC Brockhouse Prize for collaborative interdisciplinary research, and in 2014 he garnered the Faculty’s Research Leader Award for his leadership in CACT and in his research community.

Mostaghimi’s research contributions have received national and international recognition. He is a fellow of the American Association for the Advancement of Science, the American Society of Mechanical Engineers (ASME), the Canadian Society for Mechanical Engineering (CSME), the Canadian Academy of Engineering, the Engineering Institute of Canada (EIC) and the International Union of Pure and Applied Chemistry. Other recent awards include the Ontario Professional Engineers Research and Development Medal, the CSME Jules Stachiewicz Medal, the EIC Julian C. Smith Award, the ASME Heat Transfer Memorial Award and the CSME Robert W. Angus Medal.

“Professor Mostaghimi is a global research leader in the fields of thermal spray coatings and plasma processing,” said Dean Cristina Amon. “He has tremendously raised the profile of U of T Engineering through his research, technology transfer, international collaborations, and the prominent role he plays in the scientific community. He is most deserving of this prestigious honour.”