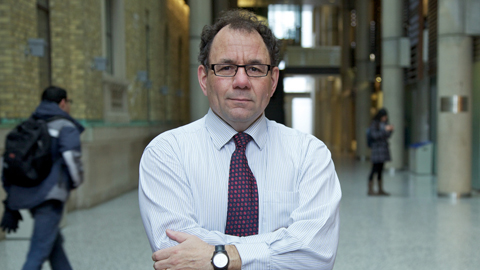 Jonathan Rose, a professor in The Edward S. Rogers Sr. Department of Electrical & Computer Engineering, has been named the 2014 recipient of the University of Toronto Faculty Award. Part of the University’s Awards of Excellence program, the Faculty Award recognizes a member of the teaching staff who consistently demonstrates excellence in both teaching and research endeavours.

Professor Rose is a pioneer in the area of Field-Programmable Gate Arrays (FPGAs); pre-fabricated semiconductor chips that can be electrically configured to become any digital circuit. He has been a world leader in research into the architecture of these devices, as well as the Computer-Aided Design (CAD) tools needed to employ and explore them.

Rose also participated in the architectural development of the two key commercial FPGAs in the market today, as a researcher, manager and entrepreneur. He is a Fellow of the Institute of Electrical and Electronics Engineers, the Association for Computing Machinery, the Canadian Academy of Engineering and the Royal Society of Canada, and a Foreign Associate of the U.S. National Academy of Engineering.

In addition to his excellence as a researcher, Professor Rose is a dedicated and innovative teacher. He is particularly known for his emphasis on the teaching of design and his long record of innovation in laboratory and design courses. His unique entrepreneurial background and his commitment to his students’ success have also made him a highly sought-after supervisor and mentor. He has received his department’s teaching award four times and recently received the Faculty Teaching Award—the Faculty’s highest teaching honour.

Jonathan Rose served as Chair of ECE from 2004-2009. During that time he prioritized the department’s teaching mission, going out of his way to celebrate excellence in teaching and to provide opportunities for professors to develop and improve their teaching skills. Currently, Professor Rose serves as the inaugural Director of the new Engineering Business minor, which he helped to develop. He also serves as Chair of the Advisory Committee of the Engineering Entrepreneurship Hatchery, a new initiative which provides students with the resources and support they need to start their own companies.

“Professor Jonathan Rose is a devoted educator and exceptional researcher who has made fundamental contributions in his field while continuing to make teaching, mentoring, and service his top priorities,” said Cristina Amon, Dean of the Faculty of Applied Science & Engineering. “I am delighted that his achievements and contributions are being recognized with this prestigious award.”

Professor Rose will be honoured at the Awards of Excellence ceremony at the Isabel Bader Theatre on April 1.