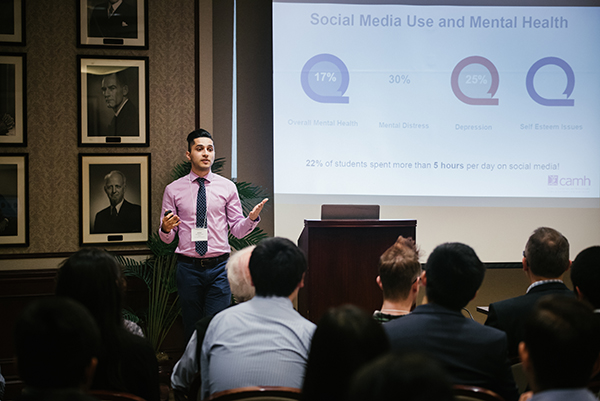 Canadians throw away almost half of the food they buy. This year, five U of T Engineering students joined forces to tackle that huge problem of food waste, and the app they produced earned them the top prize of $5,000 at the social problem-solving showdown The Game.

The six-month competition, hosted by the U of T Engineering’s Institute for Leadership Education in Engineering (ILead), held its final presentation event Thursday, March 10, 2016. The Game challenges teams of engineering students to tackle a large-scale social problem with very few parameters: the only direction students are given at the outset is to address the question ‘What’s your vision of a better world?’ and they are free to respond however they choose.

“I really enjoyed that aspect,” said Ashkan Amirghassemi (Year 3 EngSci + PEY), whose team placed third in the competition. “In engineering, everything is very structured. It was fascinating for me to step out of the classroom for a bit and do something creative.”

This year, students proposed solutions to problems as varied as social isolation, infrastructure damage from natural disasters and career dissatisfaction.  The winning app, called Foodly, helps users to plan meals, prepare grocery lists and reminds them when food is about to expire.  These features allow users to utilize all of the food they buy and, in turn, reduce food wastage.

The runners-up took home a $2,000 prize for their team’s product strategy aimed at cultivating a culture of urban gardening to promote sustainable social behaviour. The bronze-medal team won $1,000 for their campaign and tools to tackle social media overuse. In a surprise announcement, RBC revealed that it would be matching each prize as a donation to the charity of the winning team’s choice.

Now in its second year, the program is an attractive opportunity for students to develop new ideas, leverage their engineering education against social problems, and showcase their ingenuity to a room full of faculty members, social innovators and potential investors. This year more than 50 people attended the showcase.

James Haga, vice-president of strategy and investment for Engineers Without Borders Canada has judged the competition both years. “This time around,” he said, “it felt like the students brought a lot more seriousness, not only to the pitch, but also the problem identification and the unpacking of why their solution was innovative.”

Mike Klassen, leadership programming consultant at ILead, created The Game to give students an opportunity to engage in social leadership as part of their experience in U of T Engineering.

“Within ILead, one of the frameworks that we use to think about leadership is to look at leadership at the level of self, the level of team, the level of organization and the level of society,” explains Klassen. “A lot of our courses, workshops and programs tend to emphasize the self and the team, but we didn’t have a lot that explicitly looked at society.”

From September through March, participants in The Game attend meetings with mentors and external subject experts, as well as seminars and speaker series, to develop relevant leadership, collaboration and critical thinking skills.

“Just watching them develop over these past few months, and the way they tackle these problems, has been truly inspirational,” said mentor Lindsay McDonald of FreshEye Thinking, who worked for six months with the team addressing social media overuse.

“I thought The Game was amazing and I learned so much from it,” said Sidra Syeda (Year 1 EngSci), whose team claimed the top prize. “I wanted to do something more with everything I’d learned and apply all the math and science skills to solving real-life problems. That’s really why I chose engineering to begin with—to make the world a better place.”  Also on the winning team were Christopher Choquette (Year 1 EngSci), Rosemary Jose (Year 1 EngSci), Abdulla Matar (Year 4 CivE) and Sai Kiran (Year 3 ECE).

Albert Huynh (ChemE 1T2 + PEY, MASc candidate), leadership education specialist at ILead, is looking forward to what’s next for the students he’s come to know so well. “One of our hopes for the program is that at least a couple of these teams are going to move beyond March 10 and continue implementing their projects,” he said.

Only time will tell what becomes of the students’ projects, but The Game has already had an impact on some of the participants’ career plans. Fourth-year student Abdulla Matar is just about to graduate and entered into The Game with few expectations. “As the months progressed, my career path sort of shifted to doing more social innovation and social consulting positions,” he said. “And that’s actually where I’m applying right now. I really didn’t expect to be interested in this sort of thing, but it’s honestly influenced my career thinking.”