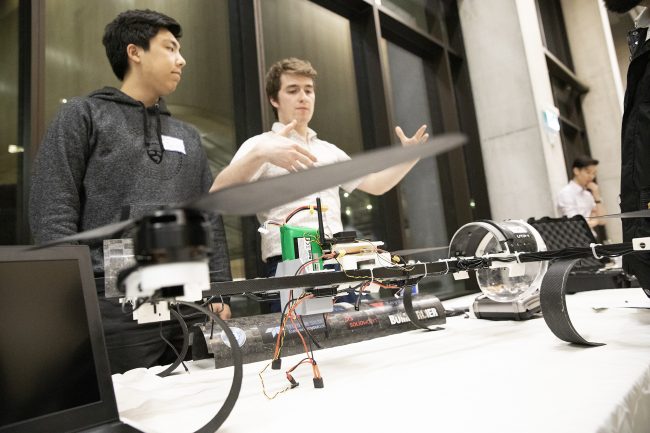 From precision multi-rotor drones able to handle and deposit items smaller than your thumb, to a mini satellite that will carry bacteria into space, the University of Toronto Aerospace Team (UTAT) featured its latest innovations at its annual aerospace showcase.

More than 50 people attended the event on March 18 at the Myhal Centre for Engineering Innovation & Entrepreneurship — the first time the event has been held in the new space.

“It’s a very active time of year right now. We’re taking part in multiple competitions and challenges so tonight we are showcasing some of our work-in-progress and the developments we’ve made,” says UTAT Executive Director Ridwan Howlader (ECE 1T9 + PEY).

Check out these highlights from UTAT’s 2019 showcase:

In May, UTAT’s Unmanned Aerial Vehicles (UAV) and Aerial Robotics Divisions will be travelling to Alma, Que. to compete at the 2019 Student UAS Competition, hosted annually by Unmanned Systems Canada.

The teams will be competing with two separate aircraft, the UTP-1 and the UT Blackhawk, both multirotor drones featuring lightweight carbon-fibre fuselage and equipped with multiple cameras.

This year’s challenge requires teams to complete a remote-equipment-monitoring task. Teams will have to fly their UAVs across a field of solar panels to identify significant changes to the solar field, locate any major damage, and place small inspection markers beside critical cells on damaged panels.

The Space Systems Division is preparing to launch the first fully student-funded Canadian satellite into orbit. The small satellite, or cubesat — about the size of a loaf of bread — will carry a biological payload and will analyze the behviour of bacteria in space with the aim of assessing the risk of infections during a long-term space mission.

The team has a busy summer ahead: they’ll be testing the accuracy of the sensors on the cubesat, running hundreds of hours of electronics tests and conducting thermal tests to ensure their satellite’s components can withstand the extreme temperatures it will experience in orbit, between -40 and 80 degrees C.

The cubesat is scheduled to launch on the Indian Space Research Organization’s Polar Satellite Launch Vehicle in January 2020.

The Rocketry Division is attempting to make history with their next high-altitude rocket project: the team will be taking part in the Base 11 Space Challenge, which promises a $1 million prize for the first student-led university team to design, build and launch a liquid-propelled, single stage rocket past the Karman Line (100 km altitude) by December 30, 2021.

While the Division is currently in the preliminary design phase, they showcased components from previous launches including a hybrid engine fuel core, a nose cone mould and a recovered fin can.