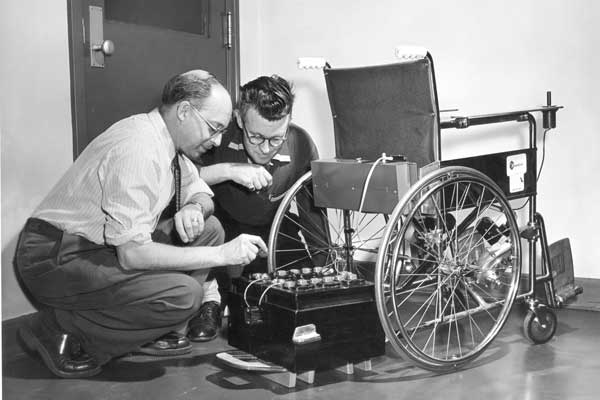 The Maker: George Klein and the first electric wheelchair 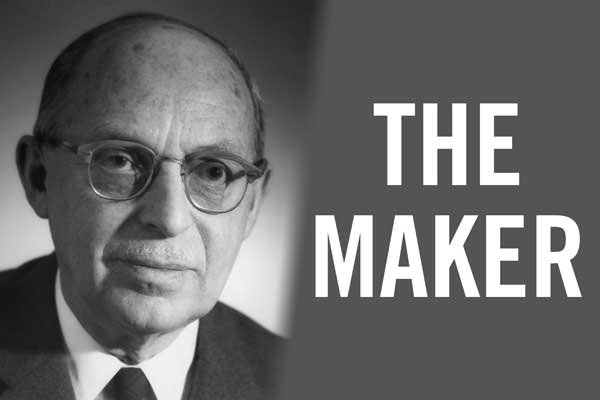 This article originally appeared in the 2016 issue of Skulematters magazine.

In many ways, George Klein (MechE 2T8) rivaled Thomas Edison, Alexander Graham Bell and other icons in the scope of his inventiveness and impact — certainly in his effect on society. His project areas ranged from aviation, defense systems and nuclear energy to construction safety, communications and space technologies.

At the same time, Klein’s work could be overstated if not placed in the context of his fruitful collaborations and the contributions of others. Many remarkable people not only helped and inspired him, but also applied his inventions to daily practice. Klein’s career and experience is a model for innovation in any field, particularly, health-care engineering.

Born in Hamilton, Ont. in 1904, Klein spent his spare time as a child hanging out at his father’s jewellery store and watch factory where the artistic work of gold and silversmiths ran in parallel to the micro-mechanics of the watch makers. He often referred to it as a gymnasium for creativity and the touchstone for many of the ingenious mechanical devices he later designed and built. Not a great student academically, he nevertheless showed talent in the workshop and earned technical school marks strong enough to gain entry to the University of Toronto’s Faculty of Applied Science & Engineering. Here, he learned the benefits of collaboration and the skills that would shape his career.

For 40 years of that career, Klein worked as a mechanical engineer and designer at the National Research Council of Canada (NRC) labs in Ottawa where he came in 1929 to join his former U of T Engineering professor John Hamilton Parkin (MIE). At NRC, Klein collaborated not only with doctorate-level colleagues, but also the tradespeople, machinists and technicians who could rapidly build and tweak his many prototypes.

Multidisciplinary collaboration fuelled his innovations in many of the same ways it inspires engineering research today.

Atypical collaboration is at the core of thousands of innovations in the healthcare engineering field and more than a few involve Klein. But one of the most vivid examples is the development of the first mass-produced electric wheelchair — a design known in its day as “The Klein Chair.”

The story begins with the discovery and refinement of penicillin, which dramatically reduced the number of fatalities from wartime spinal cord injuries. During the First World War, a spinal injury resulted in almost certain death from ensuing infection. But by the Second World War, soldiers had an 80-90 per cent rate of survival from spinal injuries thanks to the revolutionary new antibiotic.

One of those Second World War survivors was John Counsell, a Canadian officer shot through the back at Dieppe. He would live the rest of his life with paraplegia. At first satisfied with manual wheelchairs, it became clear to Counsell that quadriplegics would need something more. His advocacy, and Canada’s particular commitment to health care and veterans support, came together in the post-war period to manifest as a request to NRC and Klein to build an entirely new wheelchair.

Klein considered the project to be the most rewarding of his career. In the end, he developed a unique package of technologies including the joystick, tighter turning systems and separate wheel drives that are still features of electric wheelchairs today. After Canadian veterans were provided with their electric chairs, an international effort was made to engage manufacturers. This culminated in the formal transfer of the prototype chair to the United States Ambassador to Canada and the head of the U.S. Department of Veterans Affairs with patent-free rights to encourage production in the U.S. Within a few years, major wheelchair manufacturing companies had embraced the technology and made it available to disabled civilians en masse.

That prototype wheelchair was kept at the Smithsonian in Washington for years, but returned to Canada in 2004 and is now part of the Canada Science and Technology Museum collection in Ottawa. When visitors look at it in the display case, they are informed not only of Klein, but also that the wheelchair was a project that engaged health-care workers, doctors, therapists, mechanical designers, electrical engineers, administrators and, uniquely, the patients.

Today, patients in research projects are routinely regarded as participants and collaborators in the process who participate, with consent, and provide valued feedback. But in the early 1950s, it was an enlightened approach to include them in the early stages of a project. Klein was particularly empowered by his respect for the views of patients — those who would ultimately benefit from his innovation.

Though listed among Klein’s inventions, the microsurgical suturing device is also rightly catalogued in patents as “the NRC-Vogelfanger” instrument. The Vogelfanger cited here was Klein’s key co-inventor — a respected university professor and physician — known as one of the most skilled surgeons in Canada.

Motivated by gruesome experiences in Joseph Stalin’s prison system, Isaac Vogelfanger was looking for more effective ways of connecting severed arteries and veins when he approached Klein’s NRC lab for assistance in the late 1950s.

Beyond the electric wheelchair and suturing device, Klein spent his time at the NRC working on projects that ran from “the stick and string” era of aviation to the Space Shuttle. Here are five of his most renowned inventions:

He contributed significantly to the construction and design of the first NRC wind tunnels, helping to not only guide development of the Canadian aircraft industry, but also the first streamliner locomotives, bridges and buildings across Canada.

Wartime and the Weasel

Klein’s work played a critical role in many of our country’s scientific and technical contributions to the Second World War. The mechanical instruments that his team built for the military often transferred to private industry to contribute to the post-war industrial development. His expertise in mechanics and materials brought him to work on the first military snow vehicle, the Weasel, one of his wartime projects and once tied to the First Special Service Force, The Devil’s Brigade.

Klein was also the chief engineer and mechanical designer for the Zero Energy Experimental Pile (ZEEP). Located near Chalk River, Ont., ZEEP was the first nuclear reactor to operate outside the U.S.

He was a leading expert in the design of aircraft skis and made it practical to put them on bushplanes, indirectly opening up vast areas of Canada to exploration and air transport services. This work led him to establish a practical system for ground-cover snow classification that became the international standard and framed research in construction, transportation and avalanche prevention.

In the early 1960s, Klein’s retractable Storable Tubular Extendible Member (STEM) antenna gave Canada a special place in the Space Age. It was used in all Mercury, Gemini and Apollo spacecrafts, famous satellite projects and over 100 other innovations. After retirement and well past the age of 70, Klein worked as chief consultant on gear design for the first Canadarm and then after his 80th birthday, he contributed to the system’s further development within the Shuttle program.

Klein’s skill as a mechanical designer and his access to workshop colleagues who could make ideas real with relative ease led to the development of a stapler that easily enveloped severed blood vessels, folded back the tissue and connected the pieces with a snap. Cumbersome and crude by the standards of today’s advanced technologies, the tool did the trick and was used in hundreds of experimental surgeries in the 1960s and 1970s. It was eventually licensed to a Montreal manufacturer that did well with its commercialization.

Never seeking credit, Klein only gained recognition when others referenced his accomplishments. Among the many awards he received over the course of his career, Klein was appointed an Officer of the Order of Canada and inducted into the Canadian Science and Engineering Hall of Fame — remarkable accolades that emphasize his impact on the growth of Canadian engineering, science and technology.

His modest nature helped him work with people from varied technical fields and with different interests, but Klein said that he was particularly motivated to collaborate with others on the projects that bridged health care and engineering — fields that engage researchers in common purpose to help people while solving some of the world’s greatest challenges.

By the time he passed away on Nov. 4, 1992 at the age of 88, Klein had contributed inventions to a World War, the dawning of the Space Age and one of the most significant technological health-care projects of the 20th century, among countless others.

Dick Bourgeois-Doyle lives in Ottawa and is secretary general of the National Research Council of Canada. He previously served as chief of staff to the minister of science and technology and the minister of fisheries and oceans. A former broadcaster and journalist, he has contributed to many articles, TV features, and radio programs on the history of Canadian science and creativity. A noted biographer, Bourgeois-Doyle’s book George J. Klein: The Great Inventor is available as an e-book.