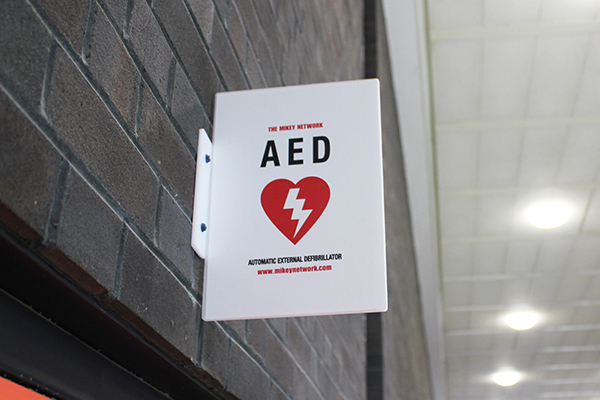 Many life-saving defibrillators behind locked doors during off-hours, study finds

August 15, 2016
A sign indicating the location of an automated external defibrillator (AED) is pictured. Research led by U of T Engineering Professor Tim Chan showed that up to 30 per cent of the time, AEDs are locked inside closed buildings when someone suffers cardiac arrest in a public place. (Credit: U of T Engineering)
Human Health

When a person suffers cardiac arrest, there is a one in five chance a potentially life-saving Automated External Defibrillator (AED) is nearby. But up to 30 per cent of the time, the device is locked inside a closed building, according to a study led by U of T Engineering researchers, published today in the Journal of the American College of Cardiology.

The work was conducted by Professor Timothy Chan of the Department of Mechanical & Industrial Engineering at the University of Toronto, in collaboration with Rescu, led by Dr. Laurie Morrison at Li Ka Shing Institute of St Michael’s Hospital in Toronto.

Currently, AED placement in Canada does not necessarily consider accessibility of the device during an emergency. Many AEDs are located within office buildings, schools and recreation facilities, which tend to be open for a limited set of hours during the daytime.

Toronto had 2,440 cases of out-of-hospital cardiac arrests in a public place during the study period, and 767 AED locations. Of these AED locations, 73.5 per cent were not open 24-hours a day, and 28.6 per cent were closed on weekends. Of the total number of out-of-hospital cardiac arrests, 451 were located near an AED but only 354 were located near an AED when the AED was accessible, resulting in a coverage loss of 21.5 per cent.

When researchers looked at cardiac arrests during evenings, nights and weekends, which is when the majority of all out-of-hospital cardiac arrests occur, coverage diminished to 31.6 percent.

The researchers concluded that a significant proportion of out-of-hospital cardiac arrests occur close to a public AED that is inaccessible at the time of the arrest, and a model that accounts for both location and availability when determining AED placement has the potential to significantly increase the likelihood of accessing an AED when needed.

“Our research has shown AED availability for cardiac arrests is overestimated when time factors, such as building access and time of day, are not considered,” said Chan. “The model considers time of day, building access and location information to optimize AED availability. Using the model, we found an average 25 per cent improvement in AED accessibility for cardiac arrests at all times of day.”

Government legislation mandating all AEDs be registered with emergency medical services dispatch centers and accessible to the public 24/7 would also improve access to AEDs.

But coverage is only one issue, according to the study’s authors: AED coverage does not necessarily equal survival, because the existence of an AED still doesn’t necessarily mean the AEDs are being used.

“Accessibility is only one piece of the larger puzzle in optimizing public defibrillator use and bystander response in an emergency,” said Chan, who is also director of the Centre for Healthcare Engineering at the University of Toronto.

In an accompanying editorial comment, Robert J. Myerburg, a professor of medicine at the University of Miami Miller School of Medicine, said the study is important and should be included in planning strategies for AED locations, but society would benefit more by both achieving better outcomes after out-of-hospital cardiac arrest and reducing the number that occur in the first place.

“Now we need a parallel effort to develop a roadmap for improving prediction and prevention of out-of-hospital cardiac arrest,” he said.