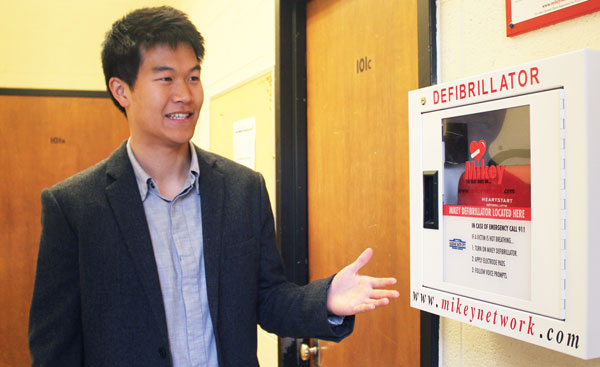 June 6, 2017
Christopher Sun is one of four PhD candidates from across U of T Engineering to receive a 2017 Vanier Canada Graduate Scholarship. (Photo: Liz Do)

Four U of T Engineering students will each receive $150,000 from the 2017 Vanier Canada Graduate Scholarships. The funding will support research into everything from faster download speeds to technologies to repair damaged hearts.

This year’s recipients are:

Callaghan is co-supervised by Professors Craig Simmons (MIE, IBBME) and Paul Santerre (IBBME). He’s working on methods for culturing pluripotent stem cells, which have the ability to develop into any cell type found in the human body. In particular, he’s interested in cells that turn into cardiomyocytes, or heart muscle cells.

Callaghan wants to better understand the chemical and physical signals that tell pluripotent stem cells what to transform into and when. These insights could enable researchers to create culture systems that let them control the fate of stem cells, either maintaining their pluripotency or forming them into specific cell types.

If successful, Callaghan’s work could one day lead to custom tissues to repair hearts damaged by disease or injury. In the nearer term, they could enable custom lab-grown tissues and organs, which scientists could use to test new drug candidates for potentially dangerous side effects.

“It’s very encouraging to have been awarded a Vanier Scholarship, and I think it reflects confidence from established scientists in the merits of this research,” says Callaghan. “I would especially like to thank my previous supervisor, Dr. Tyson MacCormack at Mount Allison University, for his mentorship and helping me find my interest in the heart and applications of physiology. My current supervisors Dr. Craig Simmons and Dr. Paul Santerre are hugely encouraging and helpful, as are my family and friends.”

While many researchers are testing the use of nanoparticles to deliver drugs directly to cancer cells, on average less than one per cent of the nanoparticles reach their intended target, often ending up in the liver and spleen. Overchuk aims to overcome this challenge by pre-treating tumours with a combination of light-sensitive molecules and lasers.

The molecules that Overchuk is applying bind to specific proteins on the surface of cancer cells. Once they are bound, Overchuk shines laser light through the skin to activate the molecules, releasing reactive oxygen species that trigger cancer cell death.

As a result of this treatment, local blood vessels dilate, which makes it easier for agents like drug-carrying nanoparticles to accumulate in the tumour. With this approach, Overchuk hopes to increase the efficacy of chemotherapy while reducing side effects.

“As an international student from Ukraine, it is a great honour for me to be awarded the Vanier Scholarship,” she says. “Being a part of the Vanier community gives me fantastic networking opportunities with like-minded individuals, who seek to bring positive changes to their society. This greatly motivates me to pursue a career in translational research in Canada.”

Rafie is studying with Professor Frank Kschischang (ECE), focusing on fibre-optic communications. He is using advanced mathematical tools to estimate the capacity — the ultimate limit to the rate at which one can reliably transmit information — of optical fibres. He can then use other mathematical tools to design communication mechanisms capable of operating at data rates near those theoretical limits.

Fibre-optic cables are the backbone of global phone networks and the Internet; approximately 99 per cent of their data is carried, for at least part of its journey, on optical fibres. Increasing data rates could enable online services to become both faster and less expensive.

“It is a great honour to be selected as a Vanier scholar, particularly in light of the very competitive nature of this award,” says Rafie. “I would like to thank Masoud Ardakani and Professor Russ Greiner of the University of Alberta, as well as my current supervisor Professor Frank Kschischang, who helped me a lot with the preparation of my application. I would also like to thank my family for their endless support.”

After graduating from U of T’s Engineering Science program, Sun (EngSci 1T3+PEY) joined the lab of Professor Timothy Chan (MIE). His research focuses on optimizing the distribution of life-saving automated external defibrillators (AEDs) in public places across the city.

In 2015 he showed that many AEDs are located in buildings that are locked overnight. If a heart attack happens nearby but after business hours, it’s almost as though the AED isn’t there at all.

More recently Chan and Sun created a “Top 10” list of prime spots to place AEDs. Their ideal locations included coffee retailers like Tim Hortons, Starbucks and Second Cup as well as ATMs operated by large banks. All of these businesses are open late and have many locations across the city.

“It’s such an honor to have our research recognized by the experts in the field,” says Sun. “It’s also great to be able to help raise awareness of issues around AEDs, which plays a huge role in bystander response. The majority of people don’t know much about AEDs or how their work. Even just knowing where the closest AED is can make the life-saving difference during a cardiac arrest.”