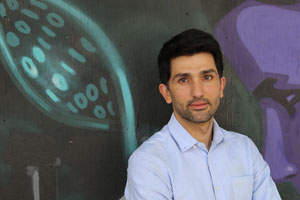 New cancer-fighting nanoparticles developed at U of T Engineering carry out multiple functions to kill cancer cells while leaving healthy ones alone. They consist of a gold nanorod core (yellow, at left) surrounded by smaller gold spheres and linked via strands of DNA containing anti-cancer drug (red). The spheres are coated with a polymer film (green) to help them avoid detection by the immune system. The electron micrograph (right) shows the scale of the particles: the black bar is 50 nanometres long, 2,000 times smaller than the width of a human hair. (Images courtesy Vahid Raeesi)

Imagine a fighter jet that can fly to its target undetected, attack with two different kinds of weapons and then disappear without a trace. Now imagine that the target is a cancer cell, and that the fighter jet is a particle so small that 60 billion of them could fit on the head of a pin.

This is the principle behind a new type of nanomedicine developed by Professor Warren Chan (IBBME) and Vahid Raeesi (MSE PhD 1T6) at U of T Engineering. Their cancer-fighting nanoparticles are modular, meaning they are put together from even smaller pieces, in this case, tiny bits of gold and DNA. Each component plays a role in the multi-part mission to treat cancer more effectively while reducing the side effects relative to current options.

“Tumours within the body are complex systems,” says Raeesi. “To interact with them, you need particles that are equally complex, adaptable and interactive. They need to change their properties and behaviour in order to complete different tasks at different times.”

The first task is to reach the cancer cells, which involves running a gauntlet past the body’s immune system, whose white blood cells are designed to capture and eject anything they identify as foreign. Once the particles reach the tumour, the next step is to deliver the payload, such as an anti-cancer drug, in a controlled, effective manner. Finally, the particles need to degrade so that they don’t damage non-cancerous cells once their mission is through.

To complete all these tasks, Raeesi and Chan built their new nanoparticles out of several parts, each of which completes a different task. At their core are gold nanorods about 7 nanometres wide and 28 nanometres long. These rods heat up when exposed to infrared light, which can be delivered by shining a laser through the skin. The heat destroys nearby cancer cells.

Gold nanorods have been used by other groups in the past, but their size and surface chemistry make them prone to being caught by the immune system. To deal with this problem, the team added 20 to 30 “satellites” made of tiny gold spheres that are coated with polyethylene glycol, a polymer. The satellites are linked to the central core with strands of DNA. By changing the size and surface chemistry of the particles, the outer spheres allow them to travel in stealth mode past the immune system until they reach the tumour.

In addition to linking the satellites to the core, the strands of DNA have a second function; incorporated into their structure are molecules of doxorubicin, an anti-cancer drug. Once they reach the tumour, Raeesi can use the laser to heat up the nanorods at the core. The heat kills cancer cells, but it also breaks the DNA strands, which releases the doxorubicin at precisely the right moment and location. The combination of heat and drugs can kill more cells than either method alone

The final task is to disappear. After the modular nanoparticles break apart, the leftover pieces are small enough that they would disperse into the bloodstream and be filtered out by the kidneys. This ensures that they don’t continue to cause damage after the treatment is complete.

Raeesi’s work, recently published in the journal Advanced Materials, showed that drug storage and release rate can be increased by controlling the DNA sequence chemistry and laser intensity. In the future, he envisions incorporating even more functions, such as contrast agents that could help tumours become more visible in MRI scans or co-delivery of multiple drugs in the case of drug-resistant cancers.

“Each component, each building block can do something for you,” says Raeesi. “Until now, we didn’t have a modular system like this to controllably deliver multiple therapeutics.”