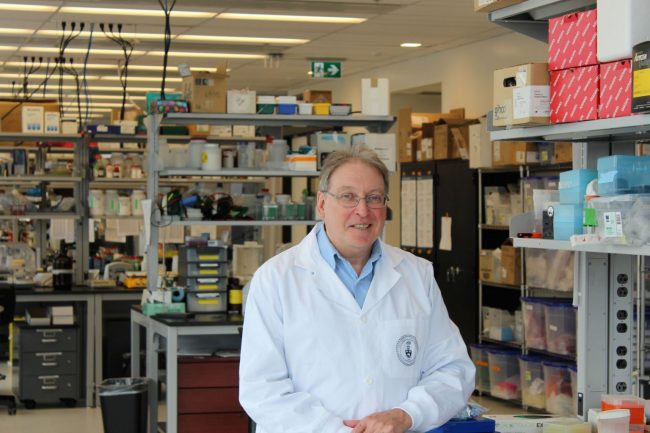 May 27, 2021
Professor Paul Santerre (pictured) is the University of Toronto’s corresponding author for this new study, and the first author, Dr. Kyle Battiston, is a recent graduate of Dr. Santerre’s lab and BME alumni. The co-industry lead author is a University of Toronto alumni, Dr. Wendy Naimark (Chief Technology officer for Ripple Therapeutics).
Human Health

An innovative biomaterial discovery by researchers at the University of Toronto in collaboration with Ripple Therapeutics Inc., has established a method that yields better control over drug release profiles in implants and has the potential to disrupt the classical drug delivery market.

Normally, drug molecules are incorporated inside biodegradable or non-degradable polymer shells and slowly release therapeutics, often with difficult to control release profiles. In this study, researchers were able to directly use the drug molecules as the delivery vehicle itself, greatly improving the fabrication process and preparation of therapeutic delivery for the clinic.

This study can be found in the latest issue of Nature Communications.

“The goal of the research and its demonstrated applications, is to build a robust system that can be utilized in the delivery of numerous classes of drug molecules,” says Professor Paul Santerre (Dentistry, BME), the University’s corresponding author of this research. “In this study, we used corticosteroids to generate structures which self-assemble on their own to form fibers, rods, nanoparticles and other forms. These robust forms surface erode in a controlled manner, delivering drug with near first order control for over weeks to months without the aid of a secondary matrix. This is a paradigm shift for the field.”

Corticosteroids are often used clinically to remedy inflammation. For example, they are found in common commercial products such as asthma inhalers, and areas of regenerative medicine such as those in ocular repair, the application described in the article. Aside from inhalation as the route of delivery, these molecules can also be delivered to localized areas in the human body through implants or tissue engineering – where a bio-degradable material traditionally encapsulates the molecules and slowly releases them over time.

In theory this is a great idea, but clinical translation is faced with challenges.

“One the greatest challenges that drug delivery faces is the incompatibility of the drug with the carrier, and the resulting inflammatory response from those carriers. The new biomaterials described in this article circumvent both of these issues and provides for a concentrated drug dose that can last from weeks to months. The innovation explains the rapid awarding of patents on the technology, and successful co-development of Ripple Therapeutics’s first product, which is in phase II trial, in collaboration with Laboratoires Théa, a leading independent ophthalmology pharmaceutical company in Europe,” says Santerre.

Precise control of the release profile is crucial in yielding efficiency and effectiveness of the therapy. Too little or too much release over a specific period could lead to ineffective therapy, or undesirable side-effects, respectively.

“The advantage of our system is that it can achieve precisely controlled delivery through tailored designed surface erosion. The Nature Communications study describes different combination of drugs and methods of using the novel biomaterials,” says Santerre.

In the work researchers first linked the corticosteroid molecules into dimer forms using a crosslinker. This type of formulation yields self-assembly into not only traditional spherical shapes, but it can also be made into meshes, and even sprayed as a device coating. The study nicely demonstrates the versatility of the technology.

After characterizing these dimer complexes for their stability and drug release profile, the researchers performed pre-clinical studies of these molecules in small rodents and rabbits. Here, the researchers used a disease model for diabetes induced visual impairment, where steroid application is a common treatment.

By injecting the corticosteroid implant into the eyes of the visually impaired animals, the researchers measured the drug release profile and its effects over time. In comparison to the leading commercially available implant, the corticoid-dimer had a consistent drug release profile of up to 12 months with no incompatible by-products released, whereas the commercial competitor drug profile was below effectivity by 2 months, and shedded lactic acid by-product from its polymer carrier, a pro-inflammatory agent.

“If successful in their first clinical studies, these polymer constructs can be utilized in diseases and pathologies, where management of inflammation, tissue regeneration, fibrosis, and drug sensitivity are critical, including osteoarthritis, premature degeneration of soft tissues, vascular pathologies, medical implant associated fibrosis, and many more,” says Santerre.