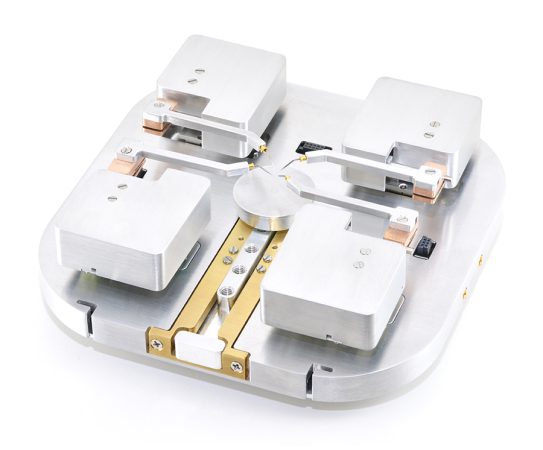 November 17, 2021
U of T Engineering and Hitachi High-Tech Canada partnership has led to scientific discoveries and commercialized products

A long-standing collaboration between researchers at U of T Engineering and Hitachi High-Tech Canada (HTC) has been recognized with a Synergy Award for Innovation from the Natural Sciences and Engineering Research Council of Canada (NSERC).

The Synergy Awards recognize examples of collaboration that stand as models of effective partnership between industry and colleges or universities. Key principal investigators from U of T Engineering involved in the collaboration include Professors Yu Sun (MIE), Jane Howe (MSE/ChemE), Tobin Filleter (MIE) and Doug Perovic (MSE).

The roots of the collaboration stretch back decades. More than 30 years ago, Perovic and HTC established a research partnership to develop advanced electron microscopy techniques.

That partnership strengthened the Ontario Center for the Characterization of Advanced Materials (OCCAM), a unique facility that contains leading-edge equipment for imaging, analyzing and manipulating materials with nanometre-scale precision.

“HTC’s contributions have been critical in turning OCCAM into Canada’s premier tandem electron microscopy/surface characterization research centre,” says Perovic. “At the same time, HTC can draw on the practical challenges that users are trying to address to develop new technologies, instrumentation and procedures. It is very much an intimate two-way partnership that has always superseded typical client-vendor relationships or university-industry collaborations.”

Since 2008, HTC has provided nearly $5 million in direct and indirect support for OCCAM, including two full-time staff engineers. Analysis carried out on OCCAM’s equipment helps researchers from across U of T — as well as from many external companies and organizations — understand the natural world and design better devices, from dental implants to solar cells.

Addressing the challenge of physically manipulating nano-scaled samples under electron microscopy imaging has been a particular focus for Sun.

“Whether you are placing probes on a single transistor in an integrated circuit, or trying to extract and sequence DNA from a specific chromosome, you need to be able to move tools to the target locations and perform precise nanomanipulation,” he says. “At the same time, because you are working in a very small chamber under high vacuum, you’re limited in the space you have to install hardware, and you must effectively handle positioning and sensing drifts due to poor heat dissipation.”

Sun, who is also the Director of the University of Toronto Robotics Institute, worked closely with HTC as he developed the LifeForce nanomanipulation system. It is currently the only robotic tool that is equipped with closed-loop control for operation inside a scanning electron microscope (SEM).

“Closed loop means that you’re not relying on human manoeuvring. You’re not checking the electron microscope images and then adjusting the nanomanipulators accordingly via joysticks,” says Sun. “Instead, you instruct the robot where you want it to move, and the robot uses its integrated position sensors and electron microscope images as feedback to precisely position itself, inside the high-vacuum chamber of the SEM.”

LifeForce was licensed to HTC and is commercialized worldwide. It can be used in fault analysis of integrated circuits and for mechanical and electrical characterization of nanomaterials such as those used in battery electrodes.

“When I first started working with Professor Sun, I quickly realised that he has only two modes of operation — on and on even more!” says Ian Cotton, a board member and former President at HTC. “His lab is like an Aladdin’s cave of engineering, which led to one of the best product concepts we have ever delivered. The results speak for themselves: an elegant design with flawless execution.”

Chad Ostrander, president of HTC, reinforces the commitment to U of T. “We are eager to continue the partnership with Professor Sun’s group and the OCCAM team, and we look forward to the next series of electron microscopy accessories and techniques.”

The technologies made available by the partnership have led to a large number of scientific and engineering discoveries and publications in high-impact journals. For example, Sun and Filleter’s labs developed a silicon-based micro-tensile testing device for operation inside transmission electron microscopes (TEM).

Using the device, in collaboration with Perovic, Howe, Professor Chandra Veer Singh (MSE) and technical staff of HTC, they conducted the first direct measurement of the tensile strength and fracture behaviour of graphene under TEM imaging. HTC is working with U of T to further develop the micro-tensile testing device into a standard product.

The partnership is about more than hardware and software. Hundreds of highly qualified personnel, from graduate students to professors to research associates, have gained valuable professional experience from the many research projects facilitated by this collaboration, and HTC has hired several U of T Engineering graduates.

Howe embodies this partnership. Before becoming a U of T Engineering faculty member in 2019, she spent 10 years working at HTC.

“I feel very lucky to have been able to move freely between industry and academia,” she says. “I think that both sectors are at their best when they are having open, productive conversations with each other, enabling fundamental discoveries to become technologies that make a real difference in people’s lives.”