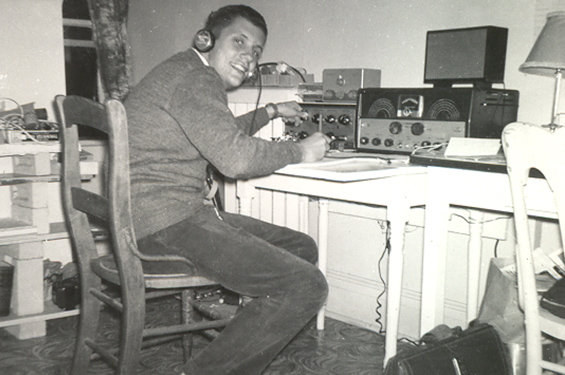 On the air: From Hart House to Vimy Ridge

Electrical and computer engineering students have long been fascinated by the facilitation of communication — between people, between machines and between people and machines. Today, your smartphone connects you to both people around the world and to objects in the room next to you. But in the early-1960s one electrical engineering student at the University of Toronto was embarking on a life-long passion for a different means of wireless communication: amateur radio.

Dr. Donald Studney (ElecE 6T3, ECE/IBBME MASc 6T7, MD 7T0) later went on to pursue medicine, but as an undergraduate student he was beginning to form a passion shared with another electrical engineering student who came before him. The Edward S. Rogers Sr. Department of Electrical & Computer Engineering (ECE) as it is now known, is named for one of its most well-known students of the early 1920s. Edward S. Rogers Sr. invented the first radio tube that could run on house current and introduced the first batteryless radio — his all electric radio station founded in 1927 still uses the call sign CFRB after Rogers Batteryless.

Ninety years after CFRB was first on the air, Dr. Studney was part of another group to make Canadian amateur radio history — and commemorate one of the most significant war efforts of Canada’s early history. “As electrical engineering students in the 1960s, we were still feeling the excitement of the Rogers era and were naturally fascinated by radio-electric communication,” says Dr. Studney. “The Hart House Amateur Radio Club was extremely well equipped so it was inevitable that decades later such an ambitious project would take root amongst some of us who shared those years on campus.”

The goal of the project was simple: commemorate the 100th anniversary of the Battle of Vimy Ridge by setting up a radio station on Vimy Ridge and operate it there during the centennial tribute. The logistical considerations of such an undertaking were highly complex. “Planning began more than five years before, and involved government agencies from both Canada and France, and more than 40,000 amateur radio operators from around the world,” says Dr. Studney. “In 2015 Industry Canada issued the call sign VE100VIMY and later France issued the call sign TM100VIMY and by the centennial, amateur radio operators from across Canada came together and we fulfilled our goal of operating a special event station there.”

This commemoration was especially poignant for Studney who as an electrical engineering student and member of the Hart House Amateur Radio Club would walk past an artifact from the Battle of Vimy Ridge. U of T alumnus, Lieutenant-Colonel Thain MacDowell was awarded the Victoria Cross for his actions at Vimy Ridge and a German machine gun that he captured during the battle was on display in Hart House while Studney was a student. “I remember walking by that gun countless times when I was a member of the Hart House Amateur Radio Club,” says Dr. Studney. “I had no idea that more than fifty years later I would be at Vimy Ridge using my call sign.”

On April 1, 2017 TM100VIMY was on the air, and four teams of operators worked eight hour shifts for eight days until the commemoration ceremonies commenced on April 9. By the time TM100VIMY shut down, more than 9,200 contacts between Vimy and amateur radio stations around the world had been exchanged. “Those eight days in 2017 were not just about radio,” says Studney. “But about Canadian history and the importance of communication across vast distances — something our Canadian identity really hinges on.”

When Dr. Studney returns to the University of Toronto for Alumni Reunion in June of 2018 to celebrate the 55th anniversary of his graduation as an electrical engineering student, he’ll walk the same halls he did as a member of the Hart House Amateur Radio Club: the same halls that Edward S. Rogers Sr. walked decades before that and Lieutenant-Colonel Thain MacDowell before him. “That connection between pioneering radio technology, the Battle of Vimy Ridge and the University of Toronto is really something special.”