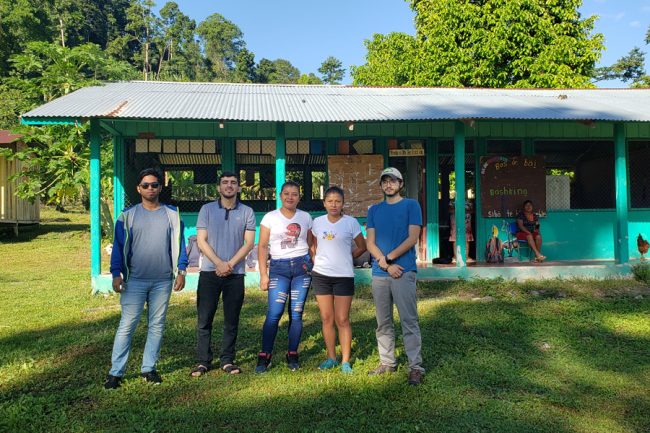 Power for the people: Designing a solar array for a remote mountain community

When Diego Amores (Year 4 ECE) learned that he would be working with the Costa Rican community of Cerro Azul, he did what many of us would: he looked it up on Google Maps. At least, he tried to.

“Nothing came up,” he says. “That was when I realized just how isolated the community was.”

Isolation has led to other challenges in Cerro Azul, which is home to about 150 people. More than a third of the local Cabécar people — members of Costa Rica’s largest Indigenous group — do not know how to read and write.

Various charities have donated educational equipment such as computers, printers and projectors to the community’s school. But Cerro Azul has no electrical grid, so the equipment must be powered by a gasoline-fueled generator, which only runs for a few hours each day.

Amores is part of a team — which also includes Shafiul Ferdous (Year 4 MIE) and Zarak Khan (Year 4 MIE) —  designing a solar panel installation which they hope will provide more consistent and reliable power. The project is part of a fourth-year capstone course at U of T Engineering, and also counts toward the certificate in Global Engineering that Amores is pursuing.

“I am from Ecuador, and I have witnessed first-hand the challenges that face people in developing countries,” he says. “I decided that I would love to work on a project that could generate a positive impact for somebody who lacks fundamental services.”

Starting in September, the team held several meetings with the project’s various partners, who include the Centre for Global Engineering, Students Offering Support and Reto Juvenil Internacional, to learn more about the design challenge. In November, they travelled to Cerro Azul for the first time.

“After driving for hours on a main road, we spent 45 minutes in a four-wheel drive truck, crossing several rivers before we reached the Cerro Azul community,” says Amores. “I was surprised by the roughness of the terrain and amazed to learn that the local people typically do the journey on foot.”

Amores and his teammates gathered information about the community which they used to estimate the power and energy demands, including peak values and typical loads. They also paid attention to the local weather conditions and visited a solar panel supplier and hardware store near the community.

Back in Toronto, the team updated their design based on what they learned. They have created a customized scenario including sun path diagrams, and accurate simulations of power and energy consumption. They also analyzed the logistics and associated costs of the project. The NGO stakeholders will use the design to seek the funding needed to construct the installation

Throughout the project, the team was advised by engineer and entrepreneur John Shoust. As the co-founder of the charity Winds of Change, Shoust has been involved in several previous projects in places such as Pedro Arauz, Nicaragua.

“I am always impressed by the student teams,” says Shoust. “They all seem to share the common goal of helping in any way they can and their visits to the communities further reinforce this. I think this is critical in the development of the future workforce, in that they gain a global perspective and understand the impact they can have on the lives of others.”

“This collaboration will have a significant impact,” says Yazmin Ruiz of Reto Juvenil Internacional. “The students of the school will be able to make use of the donated technological tools and thereby reduce gaps in the learning process. We also hope that the U of T Engineering students will be able to add flexibility, adaptability and creativity to their toolbox of professional skills.”

After graduation, Amores says he plans to pursue a career in renewable energy, which he hopes will enable him to balance his passions for engineering and development.

“This trip helped me better understand the engineering constraints that isolated places like Cerro Azul have to face,” he says. “I feel really grateful for this opportunity and I would like to encourage more engineering students to create a positive impact through these kinds of projects.”