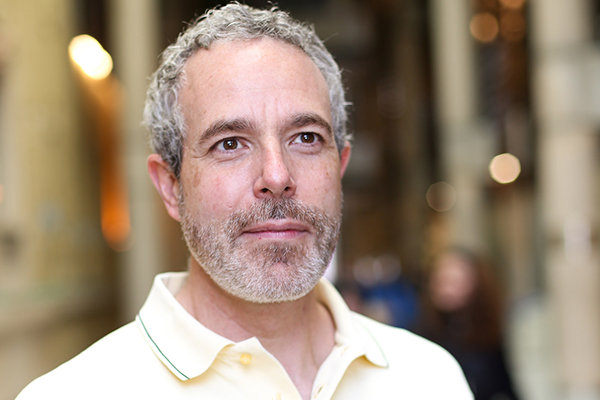 May 19, 2016
Professor Brendan Frey (ECE), with co-inventors Drs. Babak Alipanahi and Andrew Delong, was recognized with an Invention of the Year Award for DeepBind, the first-ever deep-learning application for determining the specificities of DNA- and RNA-binding proteins.
Data Analytics & Artificial Intelligence

Combining more than a decade of expertise in both machine learning technology and genomic science, U of T Engineering Professor Brendan Frey (ECE) aims to change the field of genomic medicine. He received an Invention of the Year award at U of T Celebrates Innovation, an awards ceremony hosted Tuesday, May 17 in Simcoe Hall.

The awards are designed to recognize commercialization of technology that stands to effect real social change. Frey and his co-inventors, Drs. Babak Alipanahi and Andrew Delong, combined artificial intelligence and genomic medicine to create DeepBind, the first-ever deep learning application to study mutations linked to diseases that have proven difficult to analyse in the past because of their complexity, such as haemophilia and skin cancer.

Able to handle millions of sequences per experiment, DeepBind creates a “mutation map” to reveal how genetic variations can contribute to, or even cause, disease. Developed by their startup company Deep Genomics Inc., this invention addresses the genotype-phenotype gap; that is, how a person’s genomic data can be used to determine the right diagnosis and treatment for a given condition.

Read more about the origins and science behind DeepBind

Deep Genomics Inc. is using molecular phenotypes as “stepping stones” to connect the dots between genotypes and phenotypes and reveal the genetic architecture behind cancers, neurological disorders and even aging. Genomic medicine holds the promise to significantly reduce health-care costs and improve the lives of millions of people worldwide.

“Congratulations to Professor Frey and the team behind DeepBind for its recognition as one of U of T’s Inventions of the Year,” said Professor Farid Najm, chair of The Edward S. Rogers Sr. Department of Electrical & Computer Engineering. “It is gratifying to see Brendan’s work with Deep Genomics recognized for its potential to improve people’s lives and to make a global impact.”

Frey and his collaborators received one of four Inventions of the Year Awards conferred at the event. U of T Celebrates Innovation also recognized the recipients of Connaught Innovation Awards for 2015-2016, including U of T Engineering faculty members Stewart Aitchison (ECE), Roman Genov (ECE), Glenn Gulak (ECE), Yu Sun (MIE) and Paul Yoo (IBBME, ECE).

With files from Jessica MacInnis