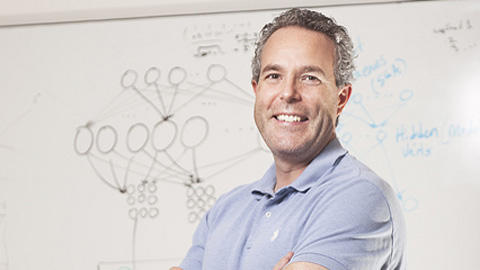 A Recipe for Stem Cell Production

A team of Toronto-based researchers may be one step closer to a ‘recipe’ for large-scale production of stem cells for use in research and therapy.

Induced pluripotent stem cells (iPSCs) can be of great value for medical research because they can flexibly develop into many different types of cells. However, producing these cells is challenging because the proteins that control their generation are largely unknown.

But researchers from the University of Toronto, the Hospital for Sick Children and Mount Sinai Hospital (with colleagues from the United States and Portugal) say they have identified certain proteins that play a key role in controlling pluripotency, which may mean a potential breakthrough in producing these cells.

The findings were recently published in Nature. One of the authors is Professor Brendan Frey (ECE). He said the researchers discovered the proteins using the splicing code developed a few years ago by a team led by he and U of T Donnelly Centre researcher Benjamin Blencowe. “The mechanisms that control embryonic stem cell pluripotency have remained a mystery for some time. However, what Dr. Blencowe and the research team found is that the proteins identified by our splicing code can activate or deactivate stem cell pluripotency,” Frey said.

When asked why the identification of these proteins is important, Frey gave the following analogy: “Suppose you’ve tasted many wonderful gourmet dishes, but you have absolutely no idea what’s needed to make them. Then, one day, you discover that there’s something called a ‘measuring cup’ that is used by all of the gourmet chefs. Now you understand something important about how dishes are prepared, and you also know about a ‘control knob’ that can be turned in order to make different dishes, just as adjusting the amount of butter and flour will give a different kind of pastry.”

And while a complete recipe for producing iPSCs may not be available yet, Frey said, it’s beginning to look more likely.