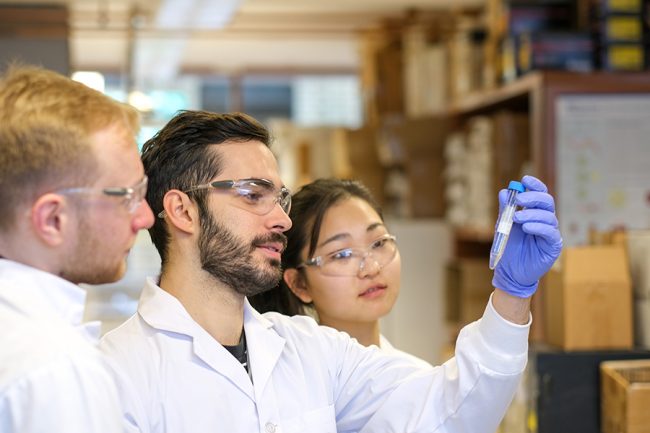 U of T Engineering researchers have developed a method to fine-tune the composition of artificial pancreatic islets — the organ and cells responsible for regulating blood glucose in the body.

The work of the multidisciplinary team from IBBME, ChemE and the Donnelly Centre could improve the success rate of implantable islets to treat people living with diabetes. The study was led by Alexander Vlahos (IBBME PhD 1T9) in Professor Michael Sefton’s (ChemE, IBBME) lab, and the findings were recently published in the journal Biomaterials.

In a healthy individual, pancreatic islets are responsible for secreting insulin, which regulates glucose levels in the human body. This function is severely dampened in those living with diabetes, where significantly lower insulin production can, if untreated, lead to blindness or kidney failure.

Recent advances have enabled researchers to implant artificial islets (also called pseudo-islets) directly under the skin to regenerate normal glucose modulation in animals. This provides a longer lasting and hands-off method for diabetes management as opposed to repeated insulin injections.

“Creating artificial islets gives us the opportunity to create an organ that is better than what nature has provided,” says Sefton. “Islets have evolved to control our blood sugar and we have learned to transplant them. We can now engineer them to be better than nature when transplanted — to reduce their oxygen consumption per unit of insulin produced or to better withstand the host response.”

The researchers first harvested donor islets and isolated the cells responsible for insulin production. The key was to next recombine them in a 3D environment to resemble an islet. These artificial islets were then reintroduced into a diabetic animal to restore glucose levels. The authors also observed proper blood-vessel formation, a hallmark of healthy regeneration of an organ.

“The next step is to evaluate the therapeutic impact of human artificial islets,” says Sean Kinney, IBBME PhD candidate. “The ultimate goal is to implant these islets into humans and have them last a decade. But there’s still quite a few barriers we have yet to overcome.”

Improvement to transplantation success is crucial for its translation into the clinic, according to the researchers. Due to the scarcity of islet donors however, this is not yet a widely adaptable method. Normally one islet transplantation would require three donors, but if the engraftment rate is better, three donors could be reduced to one. The team hopes this can effectively increase the number of patients this method can serve.