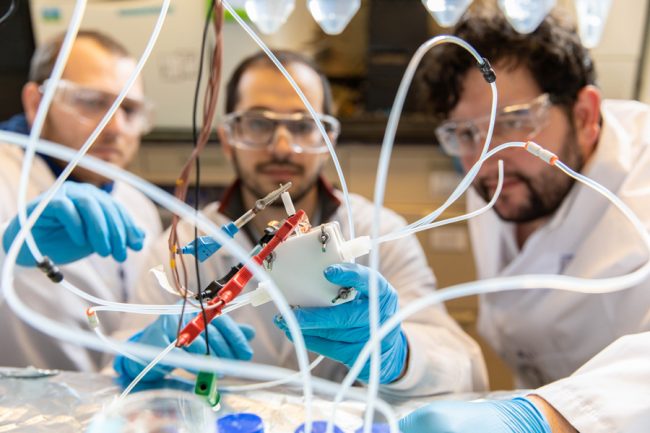 Fuel cells turn chemicals into electricity. Now, a U of T Engineering team has adapted technology from fuel cells to do the reverse: harness electricity to make valuable chemicals from waste carbon (CO2).

“For decades, talented researchers have been developing systems that convert electricity into hydrogen and back again,” says Professor Ted Sargent (ECE), one of the senior authors of a paper published today in Science. “Our innovation builds on that legacy, but by using carbon-based molecules, we can plug directly into existing hydrocarbon infrastructure.”

In a hydrogen fuel cell, hydrogen and oxygen come together on the surface of a catalyst. The chemical reaction releases electrons, which are captured by specialized materials within the fuel cell and pumped into a circuit.

The opposite of a fuel cell is an electrolyzer, which uses electricity to drive a chemical reaction. The new paper’s authors are experts in designing electrolyzers that convert CO2 into other carbon-based molecules, such as ethylene. The team includes MIE PhD candidate Adnan Ozden, who is supervised by Professor David Sinton (MIE), as well as several members of Sargent’s team, including ECE PhD candidate Joshua Wicks, ECE postdoctoral fellow F. Pelayo García de Arquer and former ECE postdoctoral fellow Cao-Thang Dinh.

“Ethylene is one of the most widely produced chemicals in the world,” says Wicks. “It’s used to make everything from antifreeze to lawn furniture. Today it is derived from fossil fuels, but if we could instead make it by upgrading waste CO2, it would provide a new economic incentive for capturing carbon.”

Today’s electrolyzers do not yet produce ethylene on a scale large enough to compete with what is derived from fossil fuels. Part of the challenge lies in the unique nature of the chemical reaction that transforms CO2 into ethylene and other carbon-based molecules.

“The reaction requires three things: CO2, which is a gas; hydrogen ions, which come from liquid water; and electrons, which are transmitted through a metal catalyst,” says Ozden. “Bringing those three different phases — especially the CO2 — together quickly is challenging, and that is what has limited the rate of the reaction.”

In their latest electrolyzer design, the team used a unique arrangement of materials to overcome the challenges of bringing the reactants together. Electrons are delivered using a copper-based catalyst that the team had previously developed. But instead of a flat sheet of metal, the catalyst in the new electrolyzer is in the form of small particles embedded within a layer of a material known as Nafion.

Nafion is an ionomer — a polymer that can conduct charged particles known as ions. Today, it is commonly used in fuel cells, where its role is to transport positively charged hydrogen (H+) ions around within the reactor.

“In our experiments, we discovered that a certain arrangement of Nafion can facilitate the transport of gases such as CO2,” says García de Arquer. “Our design enables gas reactants to reach the catalyst surface fast enough and in a sufficiently distributed manner to significantly increase the rate of reaction.”

With the reaction no longer limited by how quickly the three reactants can come together, the team was able to transform CO2 into ethylene and other products 10 times faster than before. They accomplished this without reducing the overall efficiency of the reactor, meaning more product for roughly the same capital cost.

Despite the advance, the device remains a long way from commercial viability. One of the major remaining challenges has to do with the stability of the catalyst under the new higher-current densities.

“We can pump in electrons 10 times faster, which is great, but we can only operate the system for about ten hours before the catalyst layer breaks down,” says Dinh. “This is still far from the target of thousands of hours that would be needed for industrial application.”

Dinh, who is now a professor of chemical engineering at Queen’s University, is continuing the work by looking into new strategies for stabilizing the catalyst layer, such as further modifying the chemical structure of the Nafion or adding additional layers to protect it.

The other team members plan to work on different challenges, such as optimizing the catalyst to produce other commercially valuable products beyond ethylene.

“We picked ethylene as an example, but the principles here can be applied to the synthesis of other valuable chemicals, including ethanol” says Wicks. “In addition to its many industrial uses, ethanol is also widely used as a fuel.”

The ability to produce fuels, building materials and other products in a carbon-neutral way is an important step towards reducing our dependence on fossil fuels.

“Even if we stop using oil for energy, we are still going to need all of these molecules,” says García de Arquer. “If we can produce them using waste CO2 and renewable energy, we can have a major impact in terms of decarbonizing our economy.”