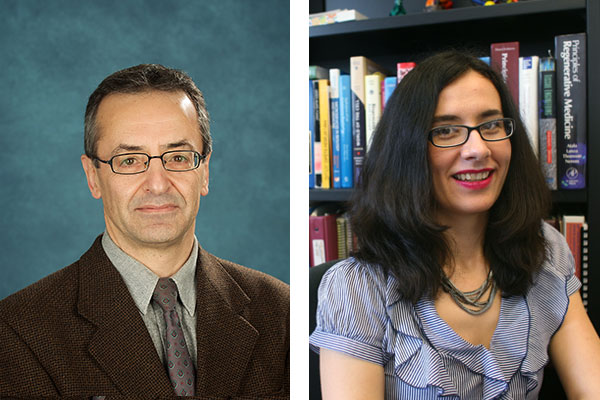 Professors Reza Iravani (ECE) and Milica Radisic (IBBME/ChemE) have been elected fellows of the Royal Society of Canada (RSC) on the basis of their exceptional contributions to scholarship in their fields.

The RSC’s mission is to recognize scholarly, research and artistic excellence, to advise governments and organizations, and to promote a culture of knowledge and innovation in Canada. Fellowship in the RSC is one of the highest honours a Canadian researcher can achieve. New fellows will be inducted at the Society’s Celebration of Excellence in Winnipeg, Manitoba on November 24, 2017.

“Professors Iravani and Radisic’s pioneering research contributions have established them as leaders in their fields, both in Canada and globally,” said Dean Cristina Amon. “They exemplify the very best of engineering innovation and the tremendous calibre of research conducted at U of T Engineering. On behalf of the Faculty, I congratulate them on this richly deserved honour.”

Reza Iravani is a leading researcher in a number of disciplines related to electric power systems and power electronics, and a pioneer in developing the control and operational concepts of microgrids and active distribution systems. He has made seminal contributions to his field in several areas, including: high-voltage direct-current transmission systems, flexible AC transmission systems, renewable and alternative energy resources, and grid-scale electric energy storage systems.

Iravani has also successfully applied the results of his groundbreaking research to technology development; his work has been used in the development and improvement of several cutting-edge technologies and widely adopted by industry. Iravani is founder of the Centre for Applied Power Electronics (CAPE), which provides state-of-the-art infrastructure and skilled personnel to facilitate university-industry collaborative research and development projects with the goal of modernizing the electric power grid.  Within CAPE, he has established a real-time simulation research test-bed facility which is unique in Canada. Iravani is a fellow of the Institute of Electrical and Electronics Engineers (IEEE) and recently served as Editor-in-Chief of IEEE Transactions on Power Delivery.

Milica Radisic is the Canada Research Chair in Functional Cardiovascular Tissue Engineering. She has pioneered a biomimetic approach to tissue engineering, in which a native tissue microenvironment is reproduced using engineering techniques such as microfabrication, in order to create high fidelity human tissue models. Radisic was the first in the world to use electrical impulses and specially designed bioreactors to guide isolated heart cells to assemble into a beating structure.

Recently, Professor Radisic and her team created an injectable tissue patch that could help repair hearts, livers or other organs damaged by disease or injury. They have also created the AngioChip, a 3D, fully vascularized piece of heart tissues that beats in real time. Radisic’s technologies founded the start-up TARA Biosystems, which is now working with several major pharmaceutical companies on drug discovery and validation using matured human heart tissues. Radisic is a fellow of the Canadian Academy of Engineering and the American Institute for Medical and Biological Engineering and the recipient of several prestigious awards.  Elected to the inaugural cohort of the RSC College of New Scholars, Artists and Scientists in 2014, she is the first member of the College to be named an RSC fellow.