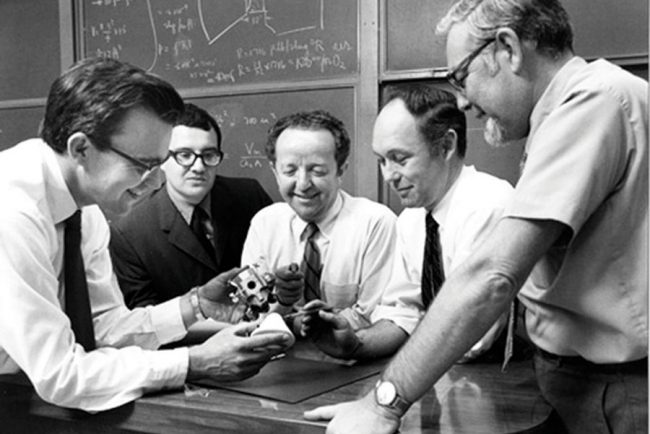 It was half a century ago, but Professor Emeritus Phil Sullivan (UTIAS) will never forget the date of April 16, 1970.

“We got a phone call in the middle of a staff meeting,” he says. It was Grumman Aerospace Corporation, an American company contracted to build the lunar module for NASA’s Apollo 13 mission. There had, it seemed, been a problem.

Three days earlier, an explosion in an oxygen tank had damaged the mission’s service module. With their life support systems critically damaged, the crew — consisting of astronauts Jim Lovell, Jack Swigert and Fred Haise — had cancelled their moon landing and were using the lunar module as a lifeboat.

But now they were about to re-enter Earth’s atmosphere, with uncertainty about what would happen next. The Grumman executive explained that he needed the aerospace experts from the University of Toronto Institute for Aerospace Studies (UTIAS) to help him with some calculations.

“The University of Toronto Institute for Aerospace Studies was at that time already world-renowned, and they made a point of hiring professors with different areas of expertise,” says Professor Emeritus Rod Tennyson, who had been promoted to Associate Professor just a week before the call.

Armed with nothing more than slide rules, a blackboard, and an open telephone line to Grumman, they set to work on one of the most infamous engineering challenges of their time.

The command module — the only piece of equipment designed to survive the heat of re-entry — was undamaged, but it was still attached to the lunar module.

“The lunar module was supposed to have been left on the moon, so they had no established procedure for separating it on re-entry” says Sullivan. If it could not be separated, it might impact the orbital trajectory of the command module, with tragic results.

The makeshift solution was to ignite an explosive charge, while also keeping the access tunnel connecting the two components pressurized with the artificial atmosphere the crew members were breathing. The combination of the pressurized gas and the explosion would hopefully throw the lunar module clear of the command module.

The question facing the UTIAS team: what was the correct pressure to use?

“At a high pressure, the team was concerned that the explosion would be so powerful as to damage the command module,” says Sullivan. “But if the pressure was too low, separation might not be achieved at all.”

After several tense hours, the professors converged around a recommendation: the crew had the best chance of survival if the pressure in the access tunnel was lowered, from its current level of five pounds per square inch down to two.

“I remember going home that night thinking that this wasn’t going to work, that something would go wrong,” says Sullivan. “Fortunately, I woke up the next day to learn that they had landed safely.”

Tennyson says he was relieved as well, but that the full impact of the event didn’t register with him until long after it was all over.

“At the time, we just assumed that the phone call that came in from Grumman was one of many, that NASA would poll several groups and take the average value” he says. “But a few days later we got a letter stating that we were the only ones contacted. I took a deep breath and said ‘Thank God they didn’t tell us that!’”

The story of the mission and the narrow escape of the three astronauts has been dramatized many times, most famously in the 1995 Academy Award-winning movie Apollo 13. Though they are not mentioned in the film, the professors received their share of recognition over the years.

In 2010, on the 40th anniversary of the event, the U of T Engineering team was honoured with an award from the Canadian Air and Space Museum. Fred Haise himself sent a message (reproduced below) thanking the professors personally for saving his life. A standing order was also read in parliament by the Honourable Ken Dryden, then MP for York Centre.

Though Etkin and Glass have now passed away, the story lives on. Sullivan has prepared a lecture about the events of that day that he delivers once a year to first-year engineering students at U of T, as well as to other audiences by request, so that future generations will have the opportunity to learn from it.

“The tagline of the film was: ‘Failure is not an option,’ but of course mistakes happen all the time,” says Sullivan. “It’s a story about what can go wrong, and how to deal with it when they do.”

Fred Haise sent the following comment for the 2010 ceremony:

Let me join others in congratulations to the University of Toronto Institute for Aerospace Studies as the recipient of this year’s Air & Space Pioneer Award. As the Lunar Module Pilot on Apollo 13, I would certainly vouch for their credentials. Their study and calculations provided a safe means to utilize pressure in the tunnel area between the Command & Service Module (CSM) and the Lunar Module (LM) to assure safe separation of the LM without damaging the hatch. This was another one of the new procedures that had to be implemented on Apollo 13 to assure our safe return. My sincere thanks and congratulations again on your well deserved award!”  – Fred Haise, Lunar Module Pilot, Apollo 13