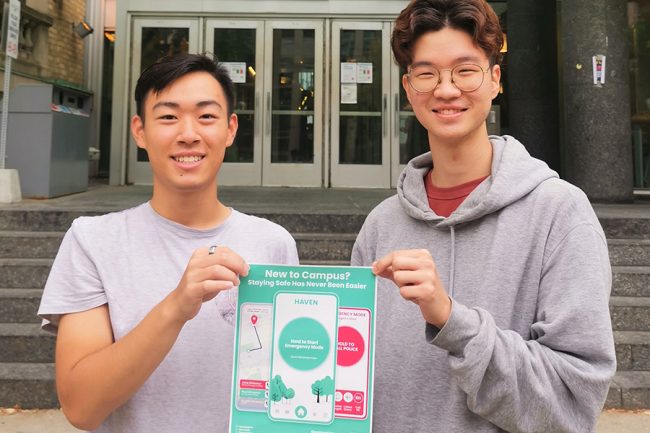 October 7, 2021
Left to right: Nelson Lee and Ethan Hugh (both Year 2 CompE) are the founders of Haven. (Photo: Lumuat Dinder)

A startup created by two U of T Engineering undergraduate students aims to help prevent sexual assaults by instantly connecting users to friends, family and other resources.

The story of Haven began a little more than a year ago, when a close friend shared her story of sexual assault with Nelson Lee (Year 2 CompE).

“I was shocked, and even more so when I started looking into the prevalence of these kinds of incidents,” says Lee. “A study by the Government of Ontario reported that sixty-three per cent of students at Ontario universities report having experienced sexual harassment. We know that sexual harassment can escalate into sexual assault, so I started thinking about how we could prevent that from happening.”

Lee focused in on the idea of an app that would enable students to get help the moment they need it. In January of 2021, he asked his friend Ethan Hugh (Year 2 CompE) to join him.

Their solution is the Haven app. The app starts by asking the user to identify a set of up to five close friends or family members that they trust. With one touch, users can share their location with these people, or signal that they need help.

For urgent situations, the app offers one-touch access to Campus Safety or emergency services, and includes a pre-written script that Lee says can shorten the time it takes for help to arrive. There is even ­an­­ option to activate a siren.

“We added that as a way to prevent the ‘bystander effect’ we often hear about in these incidents,” says Lee, describing the phenomenon in which people hesitate to get involved in an unfolding situation, and instead stand by. “It makes it really clear that it’s time to step in, even if you don’t know the person being harassed.”

Hugh and Lee spent the summer doing the programming and development. This included learning more about what their potential user base would want in an app.

“We did interviews with more than 250 students, as well as crisis centres and other organizations that deal with sexual assault,” says Lee. “We’ve been working on numerous fronts to ensure that what we’re producing is useful to people.”

They also enrolled in Hatchery NEST, a startup incubator program from U of T Engineering, which connected them to mentors and other experts such as lawyers and former policymakers.

Haven is currently free to download on Android and iOS operating systems.

Premium features enable users to further increase the number of trusted contacts, or to automatically indicate that they have arrived home safely.

Haven launched in early September, and the team says it has already been downloaded more than 1,500 times. It has also been featured on local media and the team has received a lot of positive feedback from users.

“People say it gives them peace of mind, and that they feel safer knowing that their network is just a touch away,” says Lee.

Over the next few months, the team hopes to slowly expand to campuses across Ontario. They are also reaching out to several sexual assault crisis centres to launch an education component of the app, which will outline concepts such as consent, and how to identify when boundaries have been violated.

“Our vision is to make the world a safer place, and we’re really hopeful that we can make a positive impact,” says Lee.