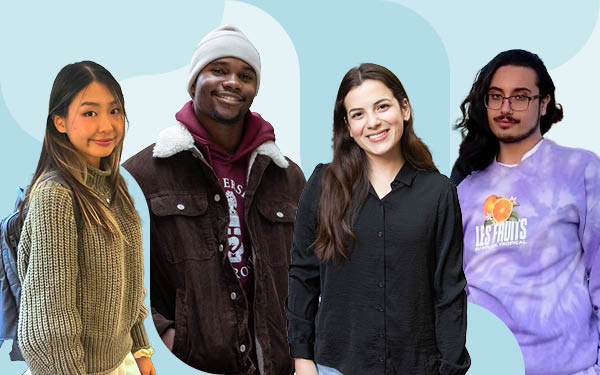 Students from Bolivia, South Korea, Tanzania and Türkiye on the transition to first year at U of T Engineering

When Mahmoud Rashid (Year 1 MSE) learned that he was selected as a Pearson Scholar, the experience was extraordinary, he says.

“When I got the letter, it was like the whole world stopped,” Rashid says. “I found out during the month of Ramadan — I am a Muslim, and I prayed every day for this. I knew I was capable and that I can influence other people to create positive change. But having others see that in me made me feel so happy.”

Rashid is one of four Lester B. Pearson International Scholarship recipients who arrived in Toronto this summer to join U of T Engineering.

The 2022 Pearson Scholars spoke with writer Safa Jinje about what led them to U of T, their experiences in Toronto so far, and their hopes for the future.

Castilla grew up in a tight-knit community, spending her entire education — from kindergarten to high school — at the same school. It was after participating in the Math Olympiad in Grade 7 that she discovered her passion for sciences.

“I wanted to have a meaningful impact on my community, and I decided that an engineering approach, with a mix of applied sciences, is the best way to do so,” Castilla says.

Since moving to Toronto from Santa Cruz, Bolivia, Castilla has enjoyed walking around the city: exploring without direction to discover interesting places — such as little cafes with cute aesthetics — and make herself more comfortable in her new home away from home.

“What I like about U of T Engineering is that it’s not competitive. People are always collaborating, and if you have questions, you can ask other students and study together.”

Castilla is excited to be a part of the EngSci program because it allows her to combine two of her passions, engineering and medicine, through a rigorous academic experience. She already knows she wants to major in Biomedical Systems Engineering, and she says that becoming a Pearson Scholar was a “dream come true.”

“I am more than sure that this scholarship will let me be my best version academically and integrally, providing me the chances of cultural, intellectual and professional experiences.”

Boran chose U of T Engineering because they wanted to study in a diverse environment to learn more from fellow future engineers from different backgrounds.

In high school, Boran was able to make a meaningful difference in people’s lives through technology and engineering activities. They especially enjoyed studying Robotics and Unmanned Aerial Vehicles, and were part of a robotics team whose motto was: “What does technology cater for unless it contributes to lives?”

“I was able to learn transferable and technical skills such as computer-aided design and team management,” says Boran

Since arriving from Türkiye, they have enjoyed the vibrancy of Toronto, from Orientation Week to watching creative drag performances, to trying international cuisines with new friends from all over the world.

By studying industrial engineering, Boran hopes to learn how to coordinate engineering teams while creating new technologies to alter the lives of millions.

“In the next few years, I am planning to create more chances for underrepresented groups with my career-management startup and increase trans visibility in engineering fields thanks to the Pearson Scholarship,” they say.

Nam, who was born in South Korea, has spent most of her life living in Korea, Indonesia and Thailand. Since arriving in Toronto, she says she has already fallen in love with the city’s cooler weather and its diverse and inclusive community.

“Living abroad in countries with wide wealth gaps, the painfully unequal opportunities in our society struck me from a young age,” she says.

“Since then, the driving force of my academic pursuits has been the desire to use science and technology to create efficient working solutions for a more equal world.”

Nam was attracted to U of T Engineering because of the Professional Experience Year Co-op Program. She also loves that as an EngSci student, she will get to explore her broad interests and discover her passions before choosing a major at the end of second year.

Nam’s advice for students studying abroad: “Finding a good community really changes the university experience. I am very grateful to find a solid supportive friend group I feel safe in. I would recommend not being afraid to reach out to new people and open mindedly face a new environment!”

Rashid moved from a rural part of Tanzania to its largest city, Dar es Salaam, when he started high school. The experience made him more globally conscious and driven to make positive change — and that’s when he realized he wanted to study engineering.

“I knew that I wanted to take action to address pressing global issues, but I also wanted to build on my love for the sciences and mathematics.”

Rashid has navigated challenges during the transition to post-secondary life: he has had to learn how to manage his time differently and become comfortable with not always knowing the answers right away.

“I am learning from these experiences, and I know it will get better,” he says.

“When you have different people coming together from different places with different experiences, we share, discuss and learn from each other, and that’s a beautiful thing.”