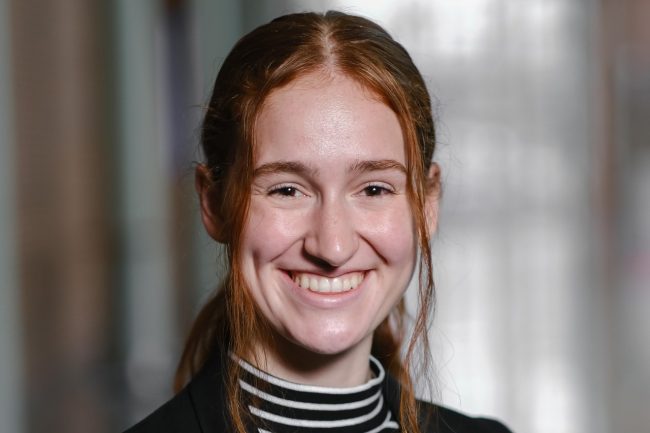 November 20, 2020
Margaux Ronciere is among four U of T undergraduate students and 36 recipients across Canada to receive the Loran Award this year.

Margaux Roncière (Year 1 TrackOne) may have just begun her studies at U of T Engineering, but Roncière is already well on her way to becoming a leader in the community.

Roncière is among four U of T undergraduate students and 36 recipients across Canada to receive the Loran Award this year. The award, valued at $100,000 over the course of four years, recognizes students who, in addition to academic achievement, have demonstrated their character and made positive changes in their communities.

Offered to students in their final year of high school, Loran Scholars must maintain a minimum cumulative grade point average of 85 per cent. However, what makes this award unique is its emphasis on character and the belief that “integrity, courage, grit and personal autonomy are better indicators of overall potential than standard academic measures.”

Diagne, Mitchell, Thompson and Roncière faced stiff competition for the Loran Award, having been selected from a pool of more than 5,000 students.

Roncière published a book in high school about an international co-operation project that aimed to develop female leadership in Senegal. She also worked on humanitarian projects in Benin and Nepal.

Now at U of T Engineering, Roncière wants to continue pursuing innovative solutions to humanitarian crises. She says she was drawn to U of T’s engineering program because its “outstanding reputation demonstrates its quality of education and its commitment to innovate.”

“I’m particularly interested in sustainability and social impact, and I believe technology can be a great lever for that,” says Roncière, who is from Dorval, Que.

Roncière was a member of her school’s United Nations club and several student committees. As a first-year engineering student, she is pursuing projects that focus on tackling global development and social and systemic change.

“I joined the Engineers without Borders chapter on Indigenous Reconciliation,” Roncière says.

“In the future, I’d also like to get more involved in policy and mental health advocacy, especially within the engineering faculty.”