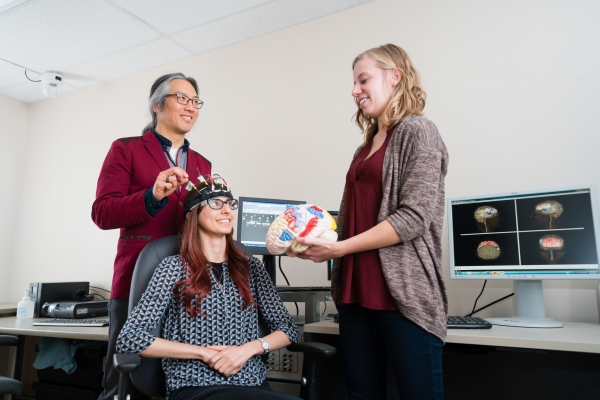 June 15, 2016
U of T biomedical engineer Tom Chau (left) pictured with his research students, is this year’s recipient of the March of Dimes Canada’s Jonas Salk Pioneer Award, recognizing his sustained scientific contributions to improving the lives of people with physical disabilities. (Photo: Neil Ta)

Professor Tom Chau (IBBME) has won the 2016 Jonas Salk Pioneer Award for his sustained scientific contributions to improving the lives of people with disabilities. Established in 1994, the award is presented annually by March of Dimes Canada to a Canadian scientist, physician or researcher who has made a new and outstanding contribution to prevent, alleviate or eliminate a physical disability.

Chau is a professor at the University of Toronto’s Institute of Biomaterials & Biomedical Engineering (IBBME) and vice president of research at Holland Bloorview Kids Rehabilitation Hospital. He leads the Paediatric Rehabilitation Intelligent Systems Multidisciplinary (PRISM) Laboratory, which develops sensing, signal processing and machine-learning methods that enable children and youth with various disabilities to communicate and interact with their environment.

One of his major scientific contributions is the Virtual Music Instrument (VMI), a web-camera interface that detects motion and reflects the user’s image on a monitor, allowing the slightest of movements to produce music on a computer by touching virtual shapes projected on the screen. The sequences can then be customized according to the needs of the individual for specific therapy or educational goals. The VMI technology was licensed in 2009 and has since been used in rehabilitation centres around the world.

Chau is renowned as a world-leading researcher and educator in the field of paediatric rehabilitation. He has supervised more than 60 graduate students, 120 undergraduate thesis and internship trainees, published more than 175 refereed scientific articles and holds five patents. From 2004 to 2014, he held the Canada Research Chair in Rehabilitation Engineering and is currently the Raymond Chang Foundation Chair in Access Innovations.

“Tom’s dedication and passion for helping young people with disabilities is truly remarkable,” said Professor Christopher Yip, director of IBBME. “His leadership in paediatric rehabilitation and multitude of research accomplishments have helped so many special needs children and their families connect with the world around them. I am honoured to call Tom a distinguished colleague and grateful to March of Dimes Canada for this recognition of his outstanding work.”

Chau will accept the Jonas Salk Award at March of Dimes Canada’s annual Ability & Beyond Dinner on June 15, 2016.