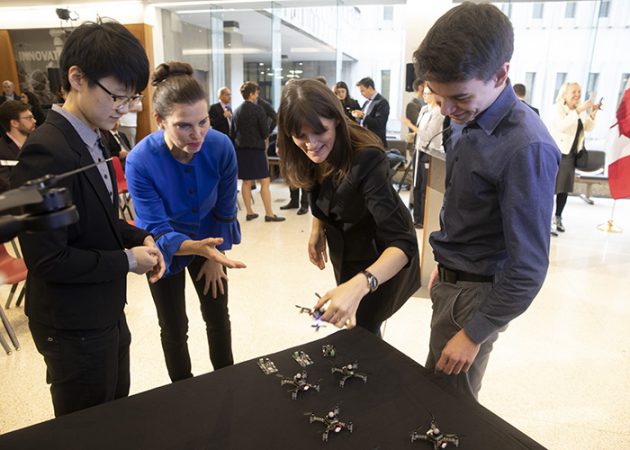 November 13, 2018
The Honourable Kirsty Duncan, Minister of Science and Sport, takes a closer look at Professor Angela Schoellig’s “robotic swarming” drones, which are designed to be self-contained units that can communicate and observe its closest-neighbour robots and make decisions based on its own observations. (Credit: Tristan McGuirk)
Data Analytics & Artificial Intelligence

Professors Angela Schoellig (UTIAS) and Piero Triverio (ECE) have been awarded new and renewed Canada Research Chairs (CRC), respectively, by the Canadian federal government. The announcement was made by The Honourable Kirsty Duncan, Minister of Science and Sport, at the University of Toronto’s St. George Campus.

“The chairholders we are celebrating today are leaders who are improving our depth of knowledge, strengthening Canada’s social fabric and helping to train the next generation of researchers,” said Duncan. “People like Professor Angela Schoellig, whose impressive robotics work we are shining a spotlight on today.”

Schoellig, who was named the Canada Research Chair in Machine Learning for Robotics and Control, brought along several types of flying robots — also known as drones — to showcase to Duncan and other attendees. “I’m very honoured to receive this recognition, which will enable me and my team to do fundamental research at the intersection of machine learning, artificial intelligence and robotics,” she said. “We hope to use machine learning to make robots more capable and safer, to be used to advance our society.”

As the head of U of T Engineering’s Dynamic Systems Lab and associate director of the Centre for Aerial Robotics Research and Education (CARRE), Schoellig conducts research combining robotics, controls and machine learning. Her goals include enhancing the performance and autonomy of robots by enabling them to learn from past experiments and from each other. She was also recently named a Vector Institute Faculty Affiliate, an initiative that brings together leading researchers in deep learning, machine learning and artificial intelligence (AI) from across Ontario.

Triverio is the Canada Research Chair in Computational Electromagnetics. His team builds mathematical models and algorithms that can address a wide range of challenges. For example, their models are used to design the networks that deliver electricity to cities, ensuring that they are resilient against power surges caused by lightning or faults. The team also uses models to prevent interference and optimize the exchange of information in electronic products such as smartphones and graphics accelerator chips. Recently, they have applied their models to the study of blood flow in diseased arteries in order to seek improved treatments.

Schoellig and Triverio are among 21 new and renewed chairholders across U of T. In addition to celebrating the latest CRCs, Duncan also announced additional funding of $210 million across Canada to support new research, early-career researchers and diversity in the CRC program.

U of T has the largest number of Canada Research Chairs of any university in the country. Today’s announcement of funding and additional funding from the federal government both supports leading research and helps the university attract and retain the best and most promising researchers from around the world. In addition to conducting research that advances knowledge and improves quality of life, the University’s Canada Research Chairs significantly enhance its capacity to train the next generation of leaders in their fields through student supervision and teaching.