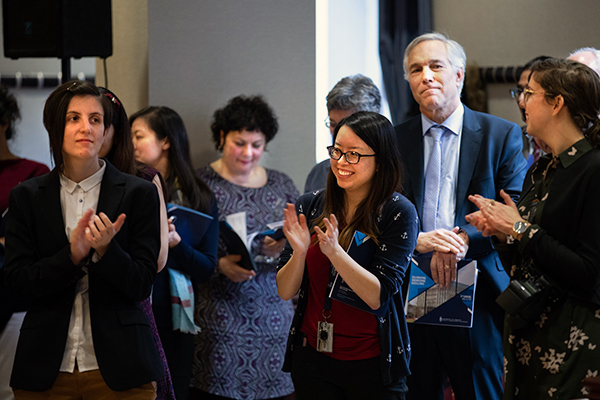 U of T Engineering faculty and staff gathered on April 18th to recognize outstanding faculty and staff members for their leadership, citizenship, innovation and contributions to the Faculty’s teaching, service and research missions at the 11th annual Celebrating Engineering Excellence reception. This annual event honours the recipients of Engineering’s staff, research and teaching awards, as well as those who received awards and major research grants over the past year.

“As we wrap up another tremendous academic year, it’s my great privilege to bring everyone together to celebrate the extraordinary contributions of our faculty and staff and to express our gratitude to everyone who makes our continued achievements possible,” said Dean Cristina Amon. “On behalf of the Faculty, I congratulate the richly deserving recipients of our staff, teaching and research awards, as well as all those who received recognition over the past year.”

This year’s award winners are: Agnes Kaneko Citizenship Award
Named in memory of a valued staff member, this award recognizes staff who have served with distinction and made contributions to the Faculty’s mission above and beyond their job description.

Mary Butera has served as Executive Assistant to the Chair in ChemE since 2010, and previously served as Development Associate and Alumni Relations Officer for the Office of Advancement. In all of her roles, Mary has been an exceptional colleague and staff member, showing tremendous commitment not just to the Faculty but to all those she works with. The strength and sincerity of the relationships she has formed is demonstrated by the fact that she continues to stay in touch with many alumni years after leaving her alumni relations position. Over the years, Mary has consistently gone above and beyond her official role in supporting U of T Engineering staff, alumni and students during difficult times and celebrating their successes with them, creating and fostering a genuine sense of community among her colleagues. 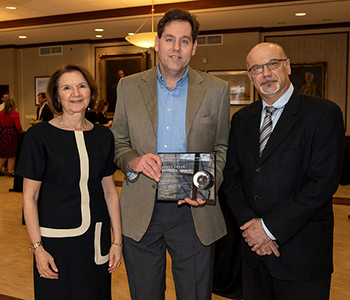 This award recognizes an early career instructor who has demonstrated exceptional classroom instruction and teaching methods.

Since joining ECE in 2011, Vaughn Betz has created a new graduate course, completely revamped a core second year course, and extensively revised the labs for a second.  Beyond his own courses, his modernization of development tools has had a significant impact on the whole programming curriculum in ECE. Vaughn has leveraged his extensive industrial experience to better link theory and practice in his courses, creating assignments and case studies which engage our students and effectively prepare them for engineering practice. His teaching evaluations are uniformly outstanding; students praise his engaging lecture style, approachability, and willingness to make time for them outside of class. Vaughn received the ECE Departmental Teaching Award in 2013 and the Gordon R. Slemon Award for Excellence in the Teaching of Design in 2016. 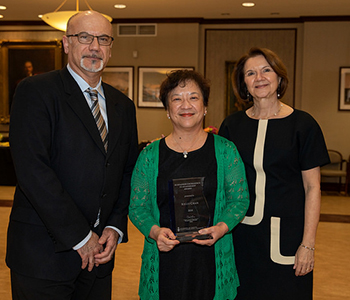 Sustained Excellence in Leadership Award
This award recognizes a staff member who has demonstrated leadership in supporting the Faculty’s mission over a sustained period.

Kelly Chan has served in a series of progressively more responsible roles within the Faculty since 1991, and is currently Administrative Coordinator for ECE. Over the years she has cultivated an extraordinary knowledge of policies and procedures and built strong relationships with key stakeholders throughout the University and beyond. Kelly demonstrates leadership in every task she undertakes and consistently evaluates each aspect of her role to ensure that everything is being done to the highest standard. Rather than waiting for a problem to arise and then solving it, she works to make sure it never does. Kelly has created a community among the administrative staff in ECE and serves as a role model and mentor to her colleagues. She received the Agnes Kaneko Award in 2004 and the ECE Outstanding Staff Member Award in 2017. 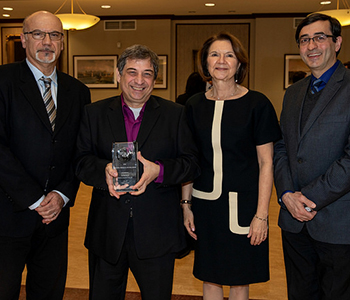 This award recognizes leadership in innovative interdisciplinary and multiple-investigator initiatives that have enhanced the Faculty’s research profile within the broader community.

George Eleftheriades is one of the founders of the fields of metamaterials and metasurfaces, making pioneering contributions to both the science behind these materials and their applications. His leadership of large-scale high-impact research projects has attracted significant funding for cutting-edge infrastructure and equipment and established U of T as a leading centre of excellence in these fields. George was also instrumental in developing working relationships with several key industrial partners, such as Qualcomm, Huawei and Intel, and spearheading partnerships with the Department of National Defense focused on the security applications of metamaterials. George is a Fellow of the Royal Society of Canada and the Institute of Electrical and Electronics Engineers (IEEE), and has received some of IEEE’s most prestigious awards. 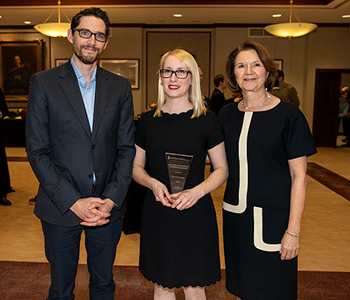 Jennifer Fabro (Office of the Registrar)

This award recognizes a staff member who has made significant contributions to the quality of student experience in the Faculty through their outstanding student service.

Since taking on the role of First Year Counsellor in the Registrars’ Office in 2013, Jennifer Fabro has had a profound effect on the experience of thousands of first-year students. She has made outstanding contributions to the experience of individual students through her academic advising, but has also impacted the entire first-year cohort through her communication and programming efforts. She was the driving force behind our improved communications with first-year students through her creation of the First Year News Feed, which ensures students know about all the opportunities and supports available to them. Jennifer also created a new component to the T-Program called the Engineering Academic Improvement Plan, which helps students to intentionally reflect on their academic difficulties and identify resources to help them succeed. 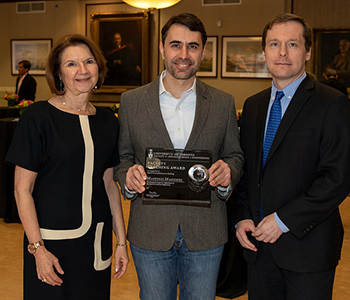 In addition to his excellent classroom teaching, Manfredi Maggiore has taken on a leadership role in course development. In 2011, he created the course ‘Robot Modeling and Control’, which is now a core course for the Robotics and Mechatronics Minor and the Robotics Engineering major in Engineering Science. In addition, his efforts in developing lecture notes, tutorials and labs for ECE’s systems control courses have had a lasting impact on the teaching of control engineering at U of T. In 2004-2005, while supervising the Control Systems Lab, Manfredi proposed and oversaw the creation of a unified experimental curriculum for all systems control courses, which led to the current organization of our laboratories in this area. Manfredi has garnered the ECE Departmental Teaching Award three times since 2004. 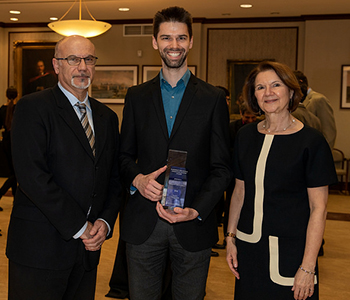 Shawn Mitchell joined the ECE Graduate Office in 2012, serving first as the Graduate Office Assistant before assuming the role of Graduate Studies Administrator in 2017. After taking on this leadership role in response to the unexpected absence of a senior staff member, Shawn dedicated himself to developing the knowledge and skills required to effectively manage one of the largest graduate offices at U of T. He has not only ensured that the office continues to run smoothly, but has improved and streamlined several processes and procedures. Shawn has also shown leadership in fostering a culture of inclusivity in the Faculty and the University. He has served on the Engineering and St. George Campus Positive Space Committees, and was captain of the U of T Pride and Remembrance Run team from 2015 to 2017. 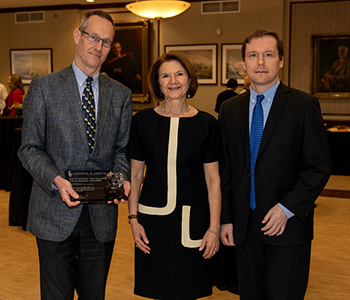 Sustained Excellence in Teaching Award
This award recognizes a faculty member who has demonstrated excellence in teaching over the course of at least 15 years.

Over the course of his teaching career, Graeme Norval has successfully brought real-world engineering practice into the classroom and laboratory. In particular, he has made exceptional contributions in instilling an industry-level safety culture through his development of safety training modules in partnership with Minerva Canada. These are widely used by universities and colleges to educate students on safety in their disciplines. He is also Chair of the Prevention Council, an advisory board to Ontario’s Minister of Labour. Graeme made significant contributions during his time as Associate Chair, Undergraduate for ChemE, better connecting technical and communications courses and leading the development of the graduate attributes system. He is a TEAL Fellow and has received ChemE’s Diran Basmadjian Small Class Teaching Award twice.

This award recognizes a staff member who has made significant contributions to the quality of student experience in the Faculty through the creation or improvement of services.

As Curriculum Officer in the Division of Engineering Science, Scott Sleeth has improved or initiated several programs and services that ensure the best possible experience for EngSci students. Scott recently partnered with the First Year Office to redesign the GEARS (Guided Engineering Academic Review Sessions) program to meet the changing needs of our students. He has also improved Engineering Science Summer Research Opportunities by involving alumni – recruiting them to evaluate applicants and providing feedback. This in turn has led several alumni to provide placements of their own. In addition, Scott provides exceptional support to EngSci’s visiting exchange students; he recently created a program to connect them with students who have conducted research at their home institutions, to further enhance their experience at U of T. 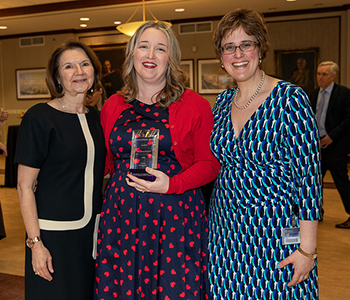 This award recognizes staff members who have shown innovation in developing a new method, technology or system, or improving an existing system, to the benefit of the Faculty.

Sarah Steed has shown exceptional innovation in implementing, improving, and marketing CONNECT, Engineering’s new online alumni engagement platform. After overseeing the launch of EngSci CONNECT as the EngSci External Relations Officer, Sarah took on the new role of Online Engagement and Marketing Strategist in the Office of Advancement, where she led the implementation of CONNECT Faculty-wide. In these roles, Sarah has worked with the platform provider to modify and enhance its design, features, and structure to better meet the Faculty’s needs. She has also continually found innovative new ways to leverage this platform to engage our alumni around the world and enhance the experience of our students. Her efforts have resulted in an online community of more than 7,000 students and alumni, which continues to rapidly grow. 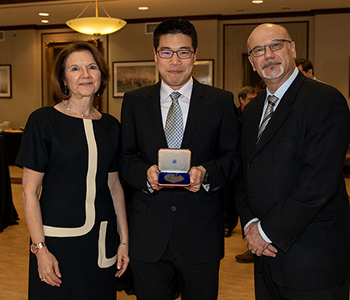 McCharles Prize for Early Career Research Distinction
This award recognizes exceptional performance and distinction in early career research, typically on the part of a pre-tenure member of the Faculty.

Ding Yuan’s exceptional research in software failure diagnosis and software reliability has already made a substantial impact on the global software industry. His work has been disseminated throughout the field, appearing multiple times on Hacker News, as well as industry conference presentations and influential blogs. It has also triggered thorough code reviews from Hadoop, the world’s most widely-used big data analytics system. Ding’s research has led to multiple U.S. patents, and is used and licensed by companies including Huawei Technologies and Microsoft. Aspirator, the software-testing tool developed and open-sourced by Ding, has detected hundreds of software defects in the world’s most popular data analytics systems, which have subsequently been repaired. The Internet services we use every day are more reliable thanks to Ding’s contributions.