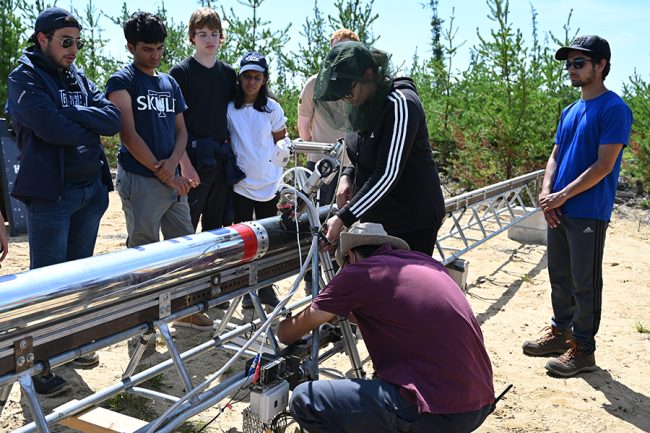 In early August, a team of students from U of T Engineering launched Canada’s first-ever experimental hybrid rocket.

The successful flight of their vehicle — dubbed Defiance — earned them first place in the Advanced Flight category of Launch Canada, a new industry-partnered intercollegiate rocket competition. Taking place August 1 – 6, 2022 in Cochrane, Ont., the competition featured 10 student rocketry teams from across the country.

“When we found out that we had won, it was actually kind of a strange moment,” says Alireza Razavi (EngSci 2T0 + PEY, UTIAS MASc candidate), director of the Rocketry Division of the University of Toronto Aerospace Team (UTAT), which includes more than 50 undergraduate and graduate students from U of T Engineering, as well as from other faculties.

“For months, our team had been so completely and utterly focused on the launch itself. Once it happened, many of us didn’t really know what to feel. But it was really amazing to see the rocket finally fly off, a moment which had six years of effort from a whole lot of people behind it.”

The UTAT Rocketry Division has been working on Defiance since 2016. Initially, the design goal was to break the Canadian amateur rocketry altitude record, but several challenges arose that caused the team to change direction.

“Any rocket needs a test verified engine before it can be launched safely, and to test an engine, you need a suitable engine test facility,” says Razavi.

“We had a small facility at the University of Toronto Institute for Aerospace Studies, but this was not suitable for the scale of engine we wanted to build for Defiance. Creating a new test facility turned out to be much more complicated and expensive than we thought. On top of that, the original design of the rocket was very slender and long, which presented challenges in terms of structural integrity.”

In parallel, Launch Canada was working to secure the location of a suitable launch site, as well as approval from Transport Canada for the high altitude launches that would be required.

“Almost every university is developing rocket technology, and this directly feeds the Canadian aerospace industry with talented engineers,” says Razavi.

“The creation of this competition was a vital achievement for Canadian teams, who previously were only able to launch their technology in U.S. competitions.”

The inaugural Launch Canada competition was originally scheduled for 2020, but was delayed until 2022 due to the COVID-19 pandemic. In the end, the U of T Engineering team made a compromise, scaling back the size of their rocket and constructing a temporary testing facility in May 2022, just three months before the competition.

Additional challenges arose from the fact that Defiance is a hybrid rocket, the only one in this year’s competition.

“Most amateur rockets are solid rockets, meaning that the fuel and oxidizer are both in solid form,” says Razavi.

“In hybrid rockets the fuel is a solid, but the oxidizer is a liquid, or vice versa. This makes them safer than solid rockets, as the fuel and oxidizer are separate while you are handling the rocket — in fact the oxidizer is only loaded once the rocket is securely on the rail. But you have the additional complexity of needing a fluid management system, one that can be operated remotely to control the flow of oxidizer during burn.”

Defiance is 5.4 metres long from nose to tail, with a diameter of 14 cm, about the same as a coffee can. It is fuelled by solid paraffin wax, the same kind found in candles. The liquid oxidizer is nitrous oxide, and is supplied through a remotely operated system of tubes, valves, sensors and monitoring equipment, all of which have to be rugged enough to work in dusty and windy conditions.

Watch the launch of Defiance, a hybrid rocket created by a team of U of T Engineering students.

On launch day, Defiance achieved an impressive altitude of 21,000 feet, but Razavi says that height is not the only important metric.

“The judges consider whether your team has done the systems engineering, verification and validation appropriately and professionally, according to industry standards,” he says.

“They look at whether you have appropriate safety procedures and how well you follow them. Altitude is a factor, but it’s mostly about how well you were able to predict the altitude, as well as how well your rocket operated in recovery.”

“This much-deserved recognition is the culmination of many years of hard work by a few generations of Engineering undergraduate and graduate students,” says Professor Christopher Damaren, faculty advisor for UTAT.

“They are a well-organized group and have been very good at passing the torch from one cohort of students to the next.  I am very proud of their achievement in this technically challenging and safety-critical design activity. Our Faculty is truly home to some excellent rocket scientists.”

Though the team is still processing their win, they are already gearing up for the next Launch Canada competition in 2023. One of their long-term goals is to raise the difficulty level by launching a rocket in which both the fuel and oxidizer are liquids.

“Competitions like Launch Canada are important because they push us to improve our designs, organization, practices and safety,” says Razavi.

“We come into this as students, but we leave prepared to be engineers, with both a good technical background and practical experience working on a challenging aerospace project in an environment that emulates industry.”