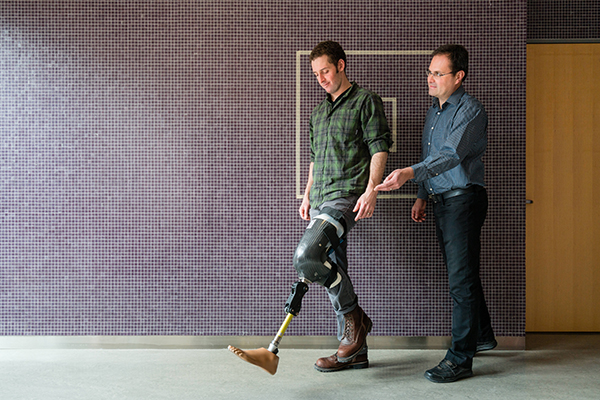 June 6, 2017
Professor Jan Andrysek (right) is designing the next generation of lower-limb prosthetics. He is one of six members of the U of T Engineering community honoured with Ontario Professional Engineers Awards. (Photo: Neil Ta)

“These awards highlight the tremendous contributions made by U of T Engineers in every facet of engineering, through professional achievement, leadership in their fields, and service to the profession and the community,” said Dean Cristina Amon. “On behalf of the Faculty, I offer my heartfelt congratulations to all the recipients on this well-deserved recognition.”

Jan Andrysek is the Clinical Engineering Program Coordinator at IBBME and leads the Pediatrics, Rehabilitation, Orthotics, Prosthetics, Engineering and Locomotion (PROPEL) Lab at Bloorview Research Institute. His research focuses on the design, development and clinical evaluation of technologies to improve mobility in children and adults with lower-limb impairments. This includes the development of new prosthetic and orthotic technologies, as well as potential interventions such as video game systems for improving postural balance. Most recently, Andrysek led the development of the “All-Terrain Knee”, now being commercialized through the spinoff company Leg Works. This durable, affordable prosthetic knee joint provides exceptional stability, is easy to fit and maintain, and can be used in harsh environments such as water, making it particularly suitable for use in the developing world.

Craig Simmons is Distinguished Professor of Mechanobiology and Scientific Director of the Translational Biology and Engineering Program at the Ted Rogers Centre for Heart Research. He is recognized internationally for his innovative contributions to mechanobiology, an emerging discipline that aims to understand and control the mechanisms by which mechanical forces regulate the biological function of molecules, cells, and tissues. Simmons has made several fundamental discoveries that have improved our understanding of heart valve function and disease. He has also developed innovative lab-on-a-chip microtechnologies for cellular engineering, including miniaturized platforms for drug screening and testing biomaterials. Simmons is a Fellow of the Canadian Society for Mechanical Engineering and a recipient of the U of T Northrop Frye Award, for linking teaching and research.

Paul Santerre is Chief Scientific Officer for Interface Biologics Inc. (IBI), which he co-founded in 2001. IBI develops transformative biomedical polymer technologies to improve the safety and effectiveness of medical devices. The company’s primary focus areas are additives that reduce thrombosis (blood clotting) in medical devices and polymer-enabled drug delivery platforms. Its core technology is a group of surface modifying macromolecules (trademarked as Endexo™), which were developed by Santerre. IBI now has multi-million dollar commercial partnerships with leading medical device manufacturers worldwide, who are using Endexo and other products to prevent blood clotting related to the use of catheters and other medical devices. Santerre has received several awards for innovation and entrepreneurship, including the NSERC Synergy Award, the Manning Award and the Governor General’s Innovation Award.

Samantha Espley serves as Technical Director for Vale Base Metals, leading innovation in mining and milling operations in Canada and internationally. An advocate for socially and technically viable solutions, she has striven to create a culture of creativity and teamwork whereby individuals work toward a common goal – from advocacy for women in engineering, to supporting the mining industry, to creating leaders who can drive change in the industry. Espley was the first woman to hold many of her roles, making her a true trailblazer and role model for young women engineers. She is a former president of Women in Science and Engineering Sudbury and has held leadership roles in many other engineering organizations. Espley is a Fellow of the Canadian Academy of Engineering and a recipient of the the Engineers Canada Award for the Support of Women in the Engineering Profession.

Margaret Kende graduated from CivE in 1960, one of just a handful of women to have completed the program at that time. Since then, she has dedicated a tremendous amount of time and energy to promoting and supporting women in engineering, serving as president of the Canadian Association of Women in Engineering among other leadership roles. Kende has participated in successful efforts to recruit more young women to faculty positions at the University of Toronto and elsewhere. She has been an active volunteer with the Engineering alumni office and has served as a Warden of Camp One Iron Ring since 1988. Kende also supports our undergraduate students through the Margaret Kende Scholarship, one of the First Women in Engineering series of scholarships. She received an Arbor Award in 2010 for her service to U of T.

Benny Pang started his career in Bombardier (formerly DeHavilland) in 1973 and has become one of the longest serving engineers in the company. Currently, as the Knowledge Domain Owner of the Acoustics discipline, he plays an important role in mentoring and training future engineering talent. Throughout his career, Benny has diligently served the Canadian engineering community. A champion of aviation environmental research, Pang initiated and continues to spearhead the Canadian Aviation Environmental Working Group. Funding obtained by this group led to the founding of Green Aviation Research and Development Network, in which he served as founding chair of the scientific committee and still serves as scientific director. Pang has also been active in the International Civil Aviation Organization’s Committee on Aviation Environmental Protection since the early 1990s.

Nicholas Stark is a respected authority in health-care facility design, and has made significant technical contributions to the design and construction or health-care facilities in Ontario and across Canada, particularly in HVAC design. He currently serves as chief engineer at HH Angus, one of Canada’s largest private engineering firms, where he leads complicated technical design projects, combining doing the right thing in terms of sustainable design with achieving elegant solutions. Stark is known to colleagues as a forward thinker, with strong abilities to apply engineering principles to solve unique problems. Early in his career, he was introduced to radiant panels and realized that they were an ideal application for hospitals as they are cleaner and more hygienic, and add planning flexibility by leaving the outside wall free of heating elements. Radiant panels are now widely used in healthcare applications. His work on the Ontario Ministry of Health and Long-Term Care’s Generic Output Specifications (GOS) and various CSA committees, especially the Z.317.2 Special Requirements for HVAC Systems in Health Care Facilities and Z8000 Canadian Health Care Facilities, has established a strong baseline of design standards for healthcare in this country. The Canadian design and construction industry have subsequently used this baseline as a foundation for a new generation of hospitals.

Ontario Professional Engineers Awards recipients will be honoured at a gala at the Toronto Congress Centre on November 18, 2017.