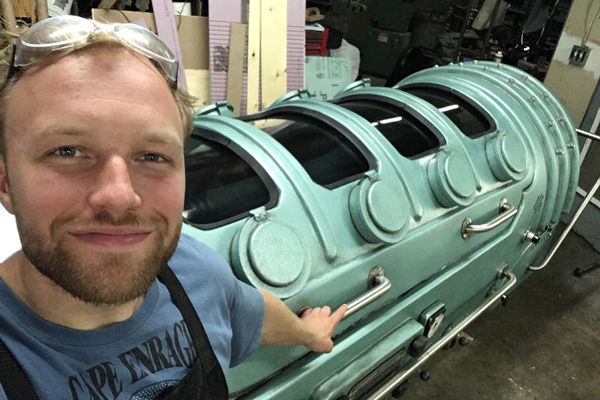 March 7, 2018
Charlie Katrycz (MIE MEng candidate) worked at Walter Klassen FX, where he was part of the team that constructed the tank for the Oscar-winning film The Shape of Water. (Photo courtesy Charlie Katrycz)
Advanced Manufacturing 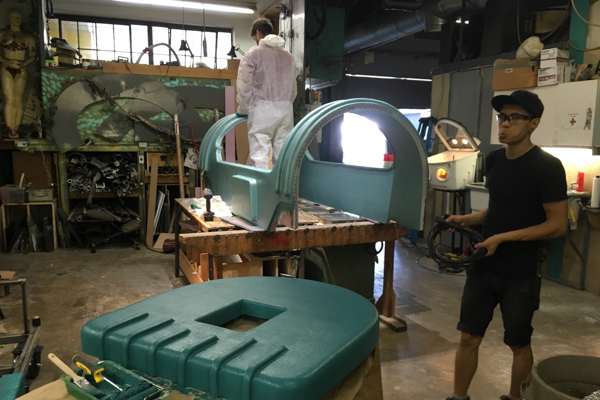 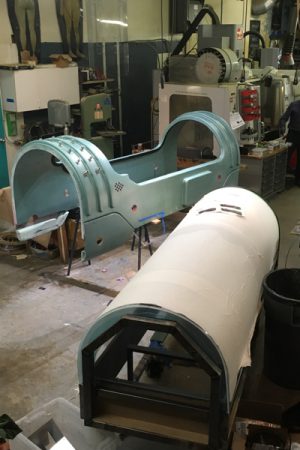 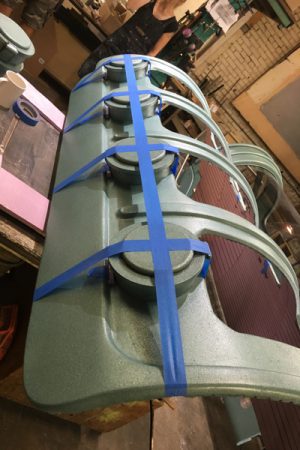 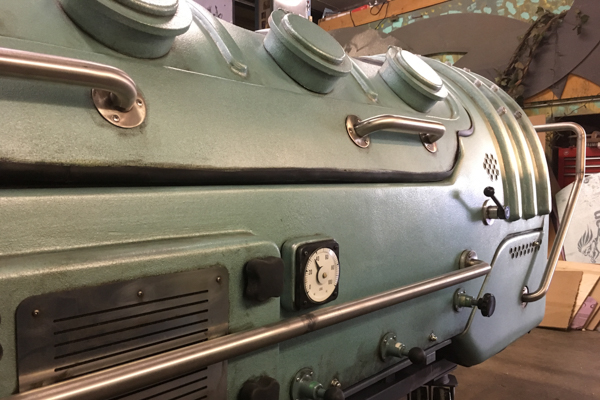 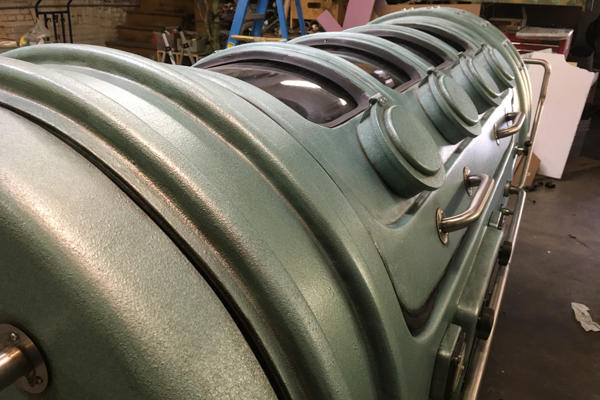 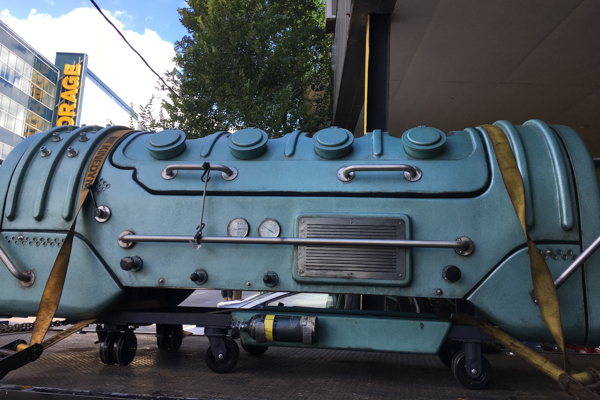 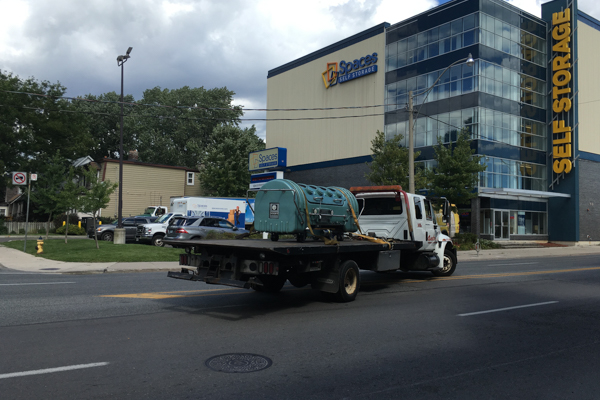 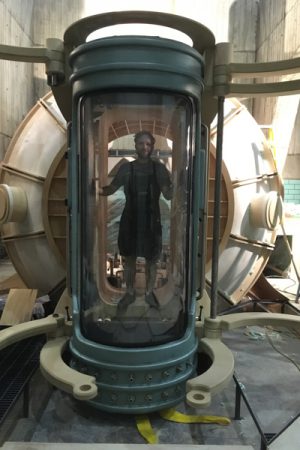 When The Shape of Water won the Academy Award for Best Picture, U of T Engineering student Charlie Katrycz had a personal reason to celebrate. The MEng candidate in the Department of Mechanical & Industrial Engineering was part of the team that built a giant water tank to hold the humanoid amphibian character at the centre of the movie.

We sat down with Katrycz to talk about his experience working on a set piece for Hollywood blockbuster, as well as how his engineering studies are powering his future plans.

Where were you when you heard the film had won the Best Picture Oscar?

I had been working really late and wasn’t able to watch the ceremony. Sometime around 3 a.m., I got a text from my dad letting me know that [Guillermo] del Toro had won.

It was pretty cool. I really liked his earlier films like Pan’s Labyrinth, so I was thrilled when I got to work on The Shape of Water, but I had no idea it would take off the way it did.

How did you get into prop creation?

After finishing my undergraduate degree in physics, I worked in material fabrication, including contracting, home renovation and carpentry. I was also working with a new fabrication process based on physics experiments, which is the basis of my company, Loonskin Labs. In 2016, I took that to Autodesk Pier 9, a world-class makerspace in San Francisco.

When I came back to Toronto, I was looking for work, and through a friend I found out about Walter Klassen FX. The place had so much character: there are relics from movie history all over, and lots of cool machines to play with. My very first job there ended up being the tank for The Shape of Water.

Can you describe the process of creating the tank?

The tank is made of steel, aluminum, acrylic, styrofoam, wood and fiberglass. There was a team of approximately 10 people building it from scratch, including welding the frame and designing and fabricating the mechanical parts and panels. It’s full of Bluetooth-Arduino electronics — this is what made the lights blink and the dials move on command.

One of the challenges was that it had to be able to stand upright, but also be wheeled around. And it had to hold the dense smoke that stood in for water: they shot it with wavy, caustic lighting and then did post-processing to add bubbles.

My role was primarily to sculpt the overall form around an acrylic tank, using foam, wood and plastics. I also designed some of the control panels, and worked with the crew to fit the tank into the set at Cinespace Studios here in Toronto.

How did you go from designing movie props to pursuing an MEng at U of T Engineering?

I’m looking for a way to up the ante on the kind of fabrication I do with Loonskin. It started as a way of imitating life-like processes, such as how lungs, trees and veins grow, but it is essentially a way to make channels within a big sheet of silicone. These channels can be filled with fluid and used to move liquid or heat around, such as when you are trying to cool a building or a human body.

I want to be able to mathematically simulate the physical phenomena behind the fabrication process. That will enable me to tweak it to meet the needs of new applications.

The MEng program enabled me to direct my own learning, and to choose the courses I found most relevant. I hadn’t done advanced mathematics in a while, so getting back up to speed was a big challenge, but also really enjoyable. I like being able to read equations and actually understand what’s going on, and it’s something I will use going forward.

You are also the co-creator of the Banana Phone. Can you tell us about that?

When I was in San Francisco, I was living with a good friend, Brian Bunsing, who is a senior account manager for Visa. He thought it would be hilarious to have very important sales calls while talking on a phone that looks like a banana.

I told him that it wouldn’t be too hard to 3D print a shell and put some electronics in it. One thing led to another, and now we’ve sold about 1,000 of them on Amazon. It was a great learning experience about how you can take a design and actually bring it to market. One per cent of our sales go to Gearing up for Gorillas, an initiative that helps protect the critically endangered mountain gorilla.

Are you an artist, a maker or an engineer?

I think I am first and foremost a designer. A big part of design is determining what exactly are the problems you need to solve. But once you’ve done that, engineering is one of the most effective tools for solving them, and for creating something that’s actually useful. That’s what it’s done for me.