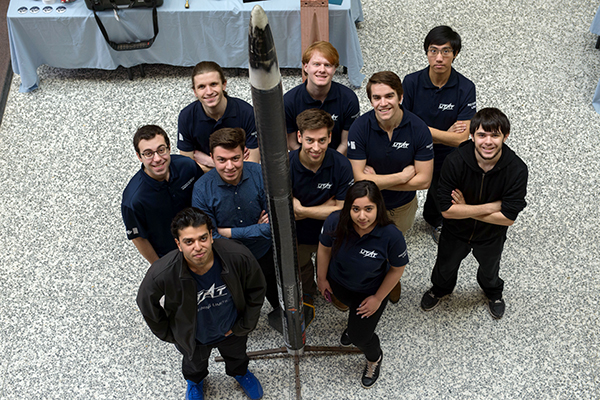 April 17, 2018
Members of the UTAT Rocketry Division unveil their Defiance MK 1 rocket during the UTAT Aerospace Showcase at the Bahen Centre for Information Technology Centre on April 9, 2018. (Photo: Laura Pedersen)

The University of Toronto Aerospace Team (UTAT) celebrated a banner year by unveiling a fleet of new vehicles at its annual Aerospace Showcase — including a six-metre-tall rocket built to blast through the Canadian altitude record for amateur rocketry.

The event was held on April 9 in lobby of the Bahen Centre for Information Technology.

“The past year has arguably been the best year in UTAT history,” says Ridwan Howlader (ElecE Year 3), executive director of UTAT, citing the team’s first-place finish at the Unmanned Aerial System (UAS) Student Competition and securing funding to develop Canada’s first fully student-funded research satellite as two of the highlights. UTAT aims to launch the satellite during the 2019–2020 academic year.

The Rocketry Division revealed their Defiance MK 1 solid rocket — a version of the hybrid sounding rocket they plan to launch in 2019 to break the Canadian amateur rocketry altitude record. The current record is set at 13,413 metres.

“Previously, we designed hybrid rockets for testing, but they are a bit more complicated,” says Andreas Marquis (UTIAS MASc candidate), UTAT director of rocketry. “It involves putting in liquid nitrous oxide, and if you lose one — which we did — it’s a huge setback for the team.”

The point of using a solid rocket, such as Defiance MK 1, is to fly it to a low altitude and test all systems peripheral to its propulsion, including flight computers and parachutes, Marquis explains. Following initial tests, this fall the team will install a more powerful engine, launching Defiance MK 2 even higher to enable testing of long-range recovery and GPS tracking.

“Finally, 50 per cent of the current rocket will come off, and attach itself to our hybrid rocket engine, which is something more complex and challenging to design and produce,” Marquis says. “That is what will blast Defiance MK 3 above the Canadian altitude record.”

The Rocketry Division is currently building a facility within the shell of a shipping container at the University of Toronto Institute for Aerospace Studies where they will be able to carry out frequent thrust and pressure tests.

“Clubs such as UTAT that involve multiple disciplines and several areas of technology, provide opportunities for learning, development of hands-on skills and personal growth that go beyond what’s available in the classroom and our course-based design experiences,” says Tom Coyle, U of T Engineering’s Vice-Dean, Undergraduate. “The knowledge, skills and experience that all UTAT members have gained will serve them well in their future careers. UTAT and all the other design teams are important components to our commitment to experiential learning.”

UTAT is one of many student clubs and teams that will benefit from direct access to design studios, light fabrication facilities and storage in the new Myhal Centre for Engineering Innovation & Entrepreneurship.

View photos from the UTAT Aerospace Showcase on Flickr.