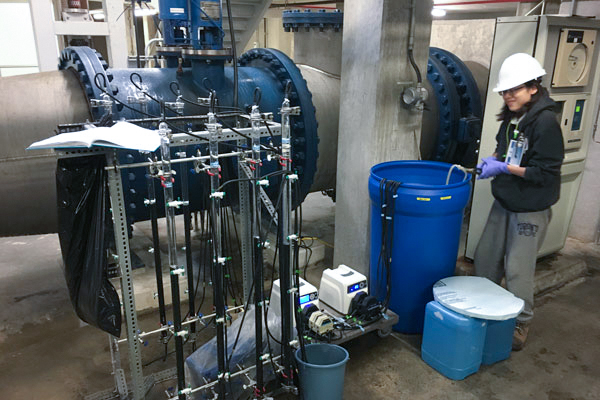 A window on the future: Institute for Water Innovation partners with industry and government on next-generation clean water technologies

Around the world, billions of people expect clean, safe drinking water whenever they turn on a tap. Through strategic partnerships with industry and governments, Civil Engineering professors Ron Hofmann and Bob Andrews are ensuring that they get it not only today, but for decades to come.

As members of the Drinking Water Research Group in the Institute for Water Innovation, the professors and their students collaborate with drinking water authorities across the GTA and beyond to plan and prepare for changes due to new environmental regulations, population growth and even climate change.

“We look at what the emerging issues are, what’s going to be important five to ten years from now,” says Hofmann. “If someone identifies a new contaminant that might be regulated in the future, we say: here’s what you can start doing now.”

Andrews and Hofmann both hold NSERC Industrial Research Chairs related to drinking water treatment. Their industrial research partners include manufacturers of water treatment equipment, such as General Electric Water & Process Technologies, as well as the City of Toronto and a number of other municipalities in and around the GTA.

“As water managers, most of our time is taken up with the day-to-day provision of safe drinking water,” says John Thompson, Director of Environmental Services with the City of Barrie. “This partnership gives us access to research and current knowledge, and can help us leverage the resources we have.”

The Drinking Water Research group are world leaders in emerging purification techniques, such as biological filtration and UV treatment. For example, Thompson recently worked with Andrews to study the effectiveness of granular activated carbon (GAC) beds, a type of biological filter used to remove compounds that can affect the taste and odour of drinking water. Although the manufacturer suggests a replacement every five years, the analysis showed the beds remained effective for more than ten. The result: savings of more than $1 million over a decade.

“Up until about 10 years ago, the idea was that we should keep filters in water treatment plants very clean,” says Andrews. “But research has shown that if we actually don’t do that, and allow a biofilm to grow on the filter material, that can actually serve as a very economical and effective treatment.”

For his part, Hofmann is leading several projects on using ultraviolet (UV) light to destroy not only harmful bacteria but also chemical compounds in the water. Pharmaceutical compounds excreted by humans are increasingly found in source water, and regulations may soon require their removal by drinking water treatment plants.

“To destroy these chemicals, you have to use much higher UV doses than you would to kill microorganisms alone,” says Hofmann. “You destroy the chemicals, which is good, but you may be forming some byproducts that are also toxic. We look for those hidden dangers so municipalities can make informed decisions about new approaches.”

The graduate students who carry out these research projects do much of their work on site, either in pilot plants run by the municipalities or in full-scale drinking water treatment plants. “They are not sequestered in a lab somewhere,” says Hofmann. “They are meeting their future colleagues all the time, and gaining valuable experience in the industry they will one day join.”

“The program gives us back every bit of what we give to it and more.” — John Thompson, Director of Environmental Services, City of Barrie.

Thompson says the partnership is beneficial for his staff as well. “It’s great having students in our plants, as it exposes our operations staff to their knowledge and their new approaches to research,” he says.

The partnership also enriches education within our Faculty. “A lot of the projects that we do with our partners generate material that we pull directly into our courses,” says Andrews. “Students really enjoy hearing about what’s going on in the industry as opposed to learning things just out of a textbook.”

Given the benefits to research, education and student experience, both Hofmann and Andrews expect such collaborations to grow in the future. Thomson has already indicated that his team is interested in continuing the partnership through the next funding cycle.

“We feel we get very good value for our dollars,” he says. “The program gives us back every bit of what we give to it and more.”