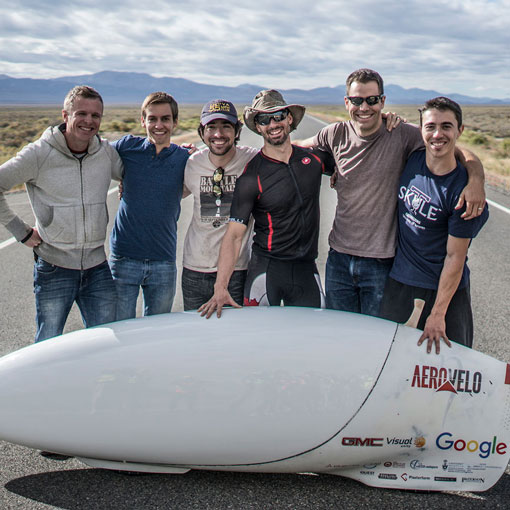 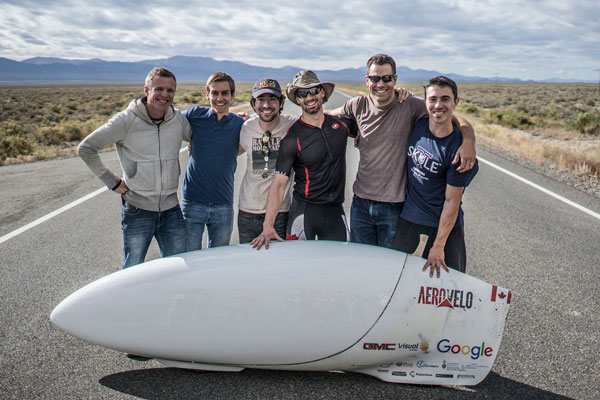 A team of U of T Engineering alumni and students has created the fastest human-powered vehicle on earth — a bicycle that reached a top speed of 139.45 kilometres per hour (86.65 miles per hour) at the World Human Powered Speed Challenge in Battle Mountain, Nevada, last week.

The 25-kilogram speed-bike, named Eta after the Greek letter used to denote efficiency in engineering equations, broke the previous 200-metre world record of 133.8 km/h (83.13 m.p.h.) on Sept 17. It then broke its own record twice over the next two days, clocking its final record-holding speed on Saturday, Sept 19. The bike was piloted by U of T Engineering alumnus Todd Reichert (EngSci 0T5, UTIAS PhD 1T1), who, along with fellow alumnus Cameron Robertson (EngSci 0T8, UTIAS MASc 0T9), founded Aerovelo, a company that designs and builds human-powered vehicles.

“We knew going in Eta was the fastest bike we’ve ever built, but the course at Battle Mountain is so unique, that this was the first time we really saw the bike perform to its full potential,” said Reichert. “I’m really proud of the work we’ve done.”

About a dozen teams competed in the World Human Powered Speed Challenge, which has been held annually for 16 years. While a few of the teams represented engineering faculties at other universities, most were simply dedicated enthusiasts of pedal power.

Reichert and Robertson are no strangers to world records. The duo are also well known for winning the Igor I. Sikorsky Human-Powered Helicopter Prize for the first-ever sustained flight of a human-powered helicopter in 2013 and for building the world’s first human-powered ornithopter in 2010, a machine that flies by flapping its wings like a bird.

Eta was created at the University of Toronto and is the result of a long-standing partnership between Aerovelo and U of T Engineering’s Human Powered Vehicle Design Team (HPVDT).

“Both teams benefit from [the partnership],” said Calvin Moes (EngSci 1T5, MSE MASc Candidate), current captain of the HPVDT. “They get experienced people to help them, and a workshop here at U of T, while we get the benefit of the research they do.”

Making high-speed bicycles is all about minimizing the loss of energy to road friction and air resistance. “On a regular road bike, you hit that kind of break-even point where you’re losing as much as you’re putting in at about 30 or 40 kilometres per hour, mostly because of the air resistance, “ said Moes. “We get rid of that almost entirely.”

This is done by surrounding the bike in a carbon fibre shell, known as a fairing, which helps it slice through the air. Making a windshield is a pain — transparent materials are more expensive and harder to work with than carbon fibre, and anything with that much curvature would distort the light so much that it would be hard to see out of anyway. For that reason, riders in both Eta and Bluenose navigate by watching a small screen connected to a tiny camera in the tail fin.

Other innovations involve super-hard tires that don’t stick to the road and a gearshift designed to minimize any energy loss to friction, heat or even sound. That doesn’t mean the ride is quiet though. “Because the shell is so thick, it resonates with the road,” said Moes. “At full speed, it sounds like a jet engine in there.”

Profesor Jun Nogami (MSE) is the faculty advisor for HPVDT; he posted live updates from Battle Mountain in real time on his blog. “It’s always a great experience for our students to be involved in building and racing these bikes,” he said. “They also get the opportunity to work with and to be inspired by graduates such as Todd and Cam. Competing at Battle Mountain is the icing on the cake, where we meet and learn from like minded people from all over the world.”

Aerovelo and the HPVDT have much to be proud of. ““This has been a dream of ours for years, but we took a different approach this year to breaking the record and spent more time preparing and testing,” said Robertson. “It feels incredible to have all that preparation pay off.”

Footage of Aerovelo’s first record-breaking run on September 17, 2015. The team followed this up by breaking their own record — twice — and recording a final speed of 139.45 kilometres per hour (86.65 miles per hour). 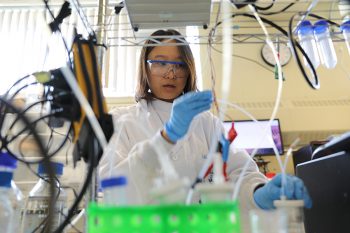