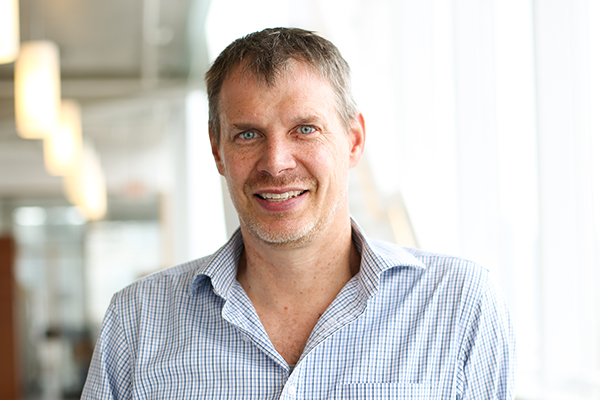 Professor Peter Zandstra (IBBME) has been recognized by Engineering Conferences International with this year’s Scale-Up and Manufacturing of Cell-Based Therapies Award. The award acknowledges outstanding contributions to the development and commercialization of stem cell-based therapies.

Zandstra is internationally renowned for his work in integrating engineering and biological approaches for the design and development of stem cell technologies. Most notably, he is known for his contributions to the fundamental understanding of stem cell bioreactor technologies and establishing the conditions that effectively yield stem cell proliferation and differentiation. His work at U of T has also included approaches to examine physiological and therapeutic effects of these stem cells, which have tremendous potential to impact regenerative medicine and drug development for a range of diseases, including cancer and heart disease.

In addition to his role as a professor in U of T’s Institute of Biomaterials & Biomedical Engineering (IBBME), Zandstra also serves as the chief scientific officer at CCRM, a Toronto-based, federally incorporated, not-for-profit organization with a mandate to support the development of foundational technologies that accelerate the commercialization of regenerative medicine and cell therapy technologies. Over the last five years, CCRM has grown to more than 60 employees, launched three companies and attracted more than $20 million in industry funding.

Zandstra is also executive director of the University of Toronto’s Medicine by Design initiative. This transformative enterprise brings together researchers and clinicians from U of T and its affiliated hospitals to accelerate discoveries in regenerative medicine, enhance capability in synthetic and computational biology, and foster translation, commercialization and clinical impacts.

Among his numerous accolades, Zandstra is a fellow of the American Association for the Advancement of Science (AAAS), American Institute of Medical & Biological Engineering (AIMBE) and the Royal Society of Canada (RSC). He also holds the title of University Professor, the highest academic rank at the University of Toronto, reserved for less than two per cent of tenured faculty.

“Congratulations to Peter on this well-deserved recognition of his outstanding and sustained contributions to the field of stem cell bioprocess engineering and therapeutics,” said Professor Christopher Yip, director of IBBME. “Peter is an exceptional researcher, innovator and leader, and this can be really seen in his dedication towards helping others succeed through initiatives such as CCRM and Medicine by Design”

Zandstra joins a distinguished group of past award recipients, including the founding president of the American Institute of Medical & Biological Engineering (AIMBE) Bob Nerem and CCRM’s chief technology officer Kim Warren. He will be giving the award lecture and recognized at the Scale-Up and Manufacturing of Cell-Based Therapies V conference to be held from January 15 to 19, 2017 in San Diego, California.