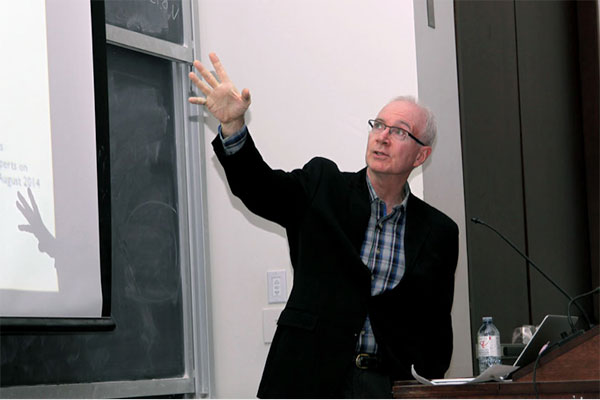 March 23, 2015
“We need to remind ourselves that to make sense of the future, it’s important to think about the past.” — Paul Cadario (Photo: Jamie Hunter).

His talk reflected on the myriad ways engineering improved lives and human wellbeing in the 20th century and the vital role engineers will play in innovating for a world facing climate change and resource scarcity.

Watch his entire lecture below:

Paul Cadario joined the World Bank in 1975 and played a number of diverse roles worldwide, including nearly two decades with the World Bank’s frontline development programs in Western Africa and China and then with public sector management throughout Asia.

After his retirement from the World Bank in 2012, Cadario was appointed Distinguished Senior Fellow in Global Innovation at the Faculty of Applied Science & Engineering and the Munk School of Global Affairs (MGA). In addition to working with faculty and students in the MGA program and PhD candidates at the Centre for Global Engineering, he co-teaches a fourth-year civil engineering capstone design course, Sustainable Global Communities.