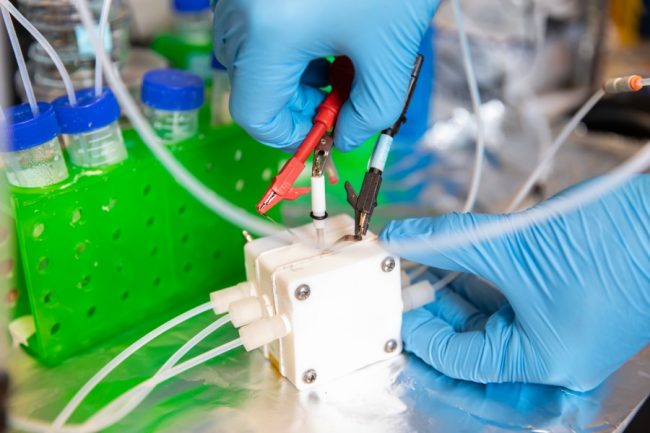 May 13, 2020
Researchers from U of T Engineering and Carnegie Mellon University are using electrolyzers like this one to convert waste CO2 into commercially valuable chemicals. Their latest catalyst, designed in part through the use of AI, is the most efficient in its class. (Photo: Daria Perevezentsev)
Sustainability

Researchers at U of T Engineering and Carnegie Mellon University are using artificial intelligence (AI) to accelerate progress in transforming waste carbon into a commercially valuable product with record efficiency.

They leveraged AI to speed up the search for the key material in a new catalyst that converts carbon dioxide (CO2) into ethylene — a chemical precursor to a wide range of products, from plastics to dish detergent.

The resulting electrocatalyst is the most efficient in its class. If run using wind or solar power, the system also provides an efficient way to store electricity from these renewable but intermittent sources.

“Using clean electricity to convert CO2 into ethylene, which has a $60 billion global market, can improve the economics of both carbon capture and clean energy storage,” says Professor Ted Sargent (ECE), one of the senior authors on a new paper published today in Nature.

Sargent and his team have already developed a number of world-leading catalysts to reduce the energy cost of the reaction that converts CO2 into ethylene and other carbon-based molecules. But even better ones may be out there, and with millions of potential material combinations to choose from, testing them all would be unacceptably time-consuming.

The team showed that machine learning can accelerate the search. Using computer models and theoretical data, algorithms can toss out worst options and point the way toward more promising candidates.

Using AI to search for clean energy materials was advanced at a 2017 workshop organized by Sargent in collaboration with the Canadian Institute for Advanced Research (CIFAR). The idea was further elaborated in a Nature commentary article published later that year.

Professor Zachary Ulissi of Carnegie Mellon University was one of the invited researchers at the original workshop. His group specializes in computer modelling of nanomaterials.

“With other chemical reactions, we have large and well-established datasets listing the potential catalyst materials and their properties,” says Ulissi.

“With CO2-to-ethylene conversion, we don’t have that, so we can’t use brute force to model everything. Our group has spent a lot of time thinking about creative ways to find the most interesting materials.”

The algorithms created by Ulissi and his team use a combination of machine learning models and active learning strategies to broadly predict what kinds of products a given catalyst is likely to produce, even without detailed modeling of the material itself.

They applied these algorithms for CO2 reduction to screen over 240 different materials, discovering 4 promising candidates that were predicted to have desirable properties over a very wide range of compositions and surface structures.

In the new paper, the co-authors describe their best-performing catalyst material, an alloy of copper and aluminum. After the two metals were bonded at a high temperature, some of the aluminum was then etched away, resulting in a nanoscale porous structure that Sargent describes as “fluffy.”

The new catalyst was then tested in a device called an electrolyzer, where the “faradaic efficiency” — the proportion of electrical current that goes into making the desired product — was measured at 80%, a new record for this reaction.

Sargent says the energy cost will need to be lowered still further if the system is to produce ethylene that is cost-competitive with that derived from fossil fuels. Future research will focus on reducing the overall voltage required for the reaction, as well as further reducing the proportion of side products, which are costly to separate.

The new catalyst is the first one for CO2-to-ethylene conversion to have been designed in part through the use of AI. It is also the first experimental demonstration of the active learning approaches Ulissi has been developing. Its strong performance validates the effectiveness of this strategy and bodes well for future collaborations of this nature.

“There are many ways that copper and aluminum can arrange themselves, but what the computations shows is that almost all of them were predicted to be beneficial in some way,” says Sargent. “So instead of trying different materials when our first experiments didn’t work out, we persisted, because we knew there was something worth investing in.”