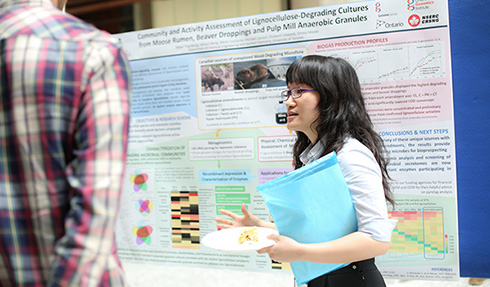 Big ideas from biotech conference at U of T Engineering

Genetically engineering algae to produce biofuel.  Growing artificial spinal discs in a lab.  Using nanotechnology to fight malnutrition.  These are just some of the ideas presented at the 16th annual CSChE Ontario-Quebec Biotechnology Meeting on May 15 – 16, 2014, which brought together over 90 graduate students from across Ontario and Quebec to explore the fascinating science at the intersection of biology and chemical engineering.

“Right now is the real golden age of biotechnology,” said keynote speaker and alumnus Phil Dennis (CivE 0T0), who has worked in the biotechnology sector for over 25 years.  “With the breakneck speed of technological developments, it’s starting to resemble the computer industry of a few decades ago.”  Dennis is senior manager at SiREM, a company born out of research in Professor Elizabeth Edwards’ (ChemE) lab that is an industry leader in bioremediation – the use of bacteria and other microbes to clean up groundwater contaminated with chemicals.

Dennis has seen the development of high throughput genetic sequencing technology suddenly make it possible to look at whole biological systems at the molecular level, raising the possibility of manipulating living systems like never before.

Biotechnology and bioengineering encompass an enormous range of applications, from industrial enzymes and bioenergy to health and medical therapies.  What unites students across these disciplines is a desire to improve our environment and our lives.  “We need sustainable solutions and biotechnology can provide this, perhaps more than other industries,” said Dennis.

Here are just two of the big ideas presented at the student-run conference, hosted by graduate students from the University of Toronto’s Department of Chemical Engineering and Applied Chemistry.

How to turn trash into cash (hint:  it’s the bacteria!)

Plastic, plastic everywhere! Thirty-two million tons of it ended up in garbage bins in the USA in 2012 alone, and of that mountain of plastic trash only nine per cent was recycled. PhD student Mahbod Hajighasemi (ChemE) is looking to the tiniest of life forms to help shrink this enormous environmental problem.  “Wouldn’t it be great if we could make plastic from renewable materials instead of oil, and then completely recycle it instead of throwing it in the landfill?  Bacteria can help us do that,” said Hajighasemi.

Some jurisdictions, like the state of California, have already started using compostable plastic that is made from renewable materials.  Called polylactic acid (PLA), it is used to make coffee cups and shopping bags which, once used, are sent to composting facilities where they take several weeks to break down.  “The problem is that PLA doesn’t actually decompose very quickly and when it does, it gives off carbon dioxide, an undesirable greenhouse gas,” said Hajighasemi.

Instead of composting the used PLA, Hajighasemi’s idea is to turn to nature’s recyclers – bacteria – to selectively break it down into its original chemical building blocks, which can then be used to make more plastic.

But how do you find bacteria that like to feast on a totally artificial plastic that doesn’t exist in nature?

It turns out that PLA is similar enough to natural polymers such as silk fibres or plant polyesters that there’s likely a bug out there that can break it down. By searching through genomics datasets from a wide range of micro-organisms, Hajighasemi has found some promising candidates among bacteria from cold marine environments and sewage treatment plants that could one day turn old plastic new again.

His hunt for plastic-degrading bacteria is part of a larger movement to look for industrially useful micro-organisms using data generated by the recent explosion in genomics studies.  These include genetic information on a huge numbers of natural enzymes with unknown functions.  It’s now up to researchers like Hajighasemi to figure out what they do and put their abilities to use.

How to go where you can’t go

How do you deliver a drug to the specific location in the body where it is needed?  If you’re working with drugs that repair spinal cord injuries, the answer is “Not very easily.”

Drugs that can stimulate nerve growth and repair spinal cord damage already exist, yet therapeutic treatments remain elusive.  “The main problem is how to get the drug to the damaged site,” said PhD student Irja Elliott Donaghue (ChemE/IBBME collaborative program). “The spinal cord is wrapped in a protective barrier that blood and drugs simply can’t cross.”

That means pills or even intravenous drugs won’t work.  Injecting drugs with a needle directly to the spinal cord through that protective barrier – a method called catheter infusion – is risky to patients and would have to be repeated many times over weeks or months during the slow healing process.

What’s really needed is a slow-release drug delivery system that could be implanted in a patient once but would steadily release the needed drugs directly to the spinal cord, without the need for repeated injections.

That’s where a nifty bit of engineering by Elliott Donaghue and her colleagues comes in.  Working with Professor Molly Shoichet (ChemE and IBBME) and other members of her research group, she has helped developed a gooey hydrogel that can be impregnated with drugs and injected into a patient’s spinal cord to give off a constant dose of medication for an extended time. “What’s neat about this hydrogel is that it’s very soft at cooler temperatures but gets stiffer as it warms up to body temperature,” said Elliott Donaghue.

This means that the fluid gel can easily be injected but firms up once it’s in the patient’s body to create a long-lasting drug source, while remaining flexible enough not to damage the spinal cord.  As a bonus, the hydrogel is made of a natural polymer that slowly breaks down in the body and is eventually absorbed, eliminating the need to remove it once treatment is over.

Elliott Donaghue was first to test the method in rats in collaboration with Dr. Charles Tator at Toronto Western Hospital.  The team is now working on adjusting drug doses and exploring the use of combinations of drugs to see greater effects.