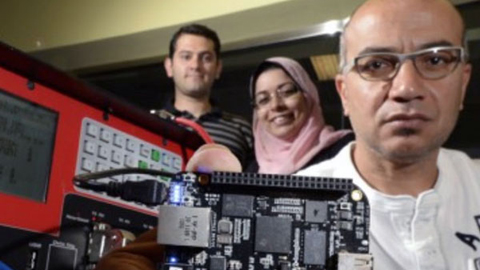 Six U of T Engineers have received research funding for projects that tackle major societal challenges – from reducing traffic congestion and improving spinal surgery, to understanding the world at the nanoscale.

And the source of the investment? U of T itself, specifically the Connaught Fund, the university’s premier source of internal research funding.

The Connaught Fund named five U of T Engineering professors for Connaught Innovation Awards, with a sixth professor receiving support through the Connaught Summer Institutes program. Funding for this round totaled over $900,000 to 12 scholars across the University campus.

These funds are designed to help accelerate the development of promising technology and promote commercialization and knowledge transfer.

“The Connaught Fund is synonymous with U of T’s large and lasting impact on society and the economy through its transformative innovations. U of T Engineering is proud of the diverse and innovative research carried out by our faculty and students,” said Professor Ted Sargent, Vice Dean, Research. “Connaught Fund support enables our researchers to continue making economic, health and environmental impacts felt across Canada and around the world.”

Connaught Innovation Award recipients from U of T Engineering include:

One U of T Engineering project also received funding through the Connaught Summer Institutes program:

One strong example of promising technology is the MARLIN project, which addresses a key problem of modern cities: traffic congestion.

Developed by Professor Baher Abdulhai (CivE) and his research team, MARLIN is an artificial intelligence-based traffic control system that, during research testing, has proved to dramatically improve traffic flow at intersections, streets and roadways, while also reducing a city’s traffic maintenance and infrastructure costs.

MARLIN combines machine learning, traffic cameras and computers to create traffic lights that can measure vehicle delay, understand what it means and adapt signal patterns to reduce congestion. Professor Abdulhai says the technology cuts down motorists’ delays at intersections by an average of 40 per cent and more in areas with chronic congestion, as well as reducing emissions.

“Some congestion is a sign of the vibrancy of an urban area,” said Professor Abdulhai. “But too much congestion has many negative consequences. The good news is that there are approaches like MARLIN that can address congestion and ease the problem.”

Professor Abdulhai and his team will use Connaught funding to integrate the MARLIN software with common industrial hardware and conduct field operation testing of the complete solution at a few intersections in partnership with willing municipalities.

About the Connaught Fund

Founded in 1972, the Connaught Fund was created from the sale of the Connaught Laboratories, which first mass-produced insulin, the Nobel Prize award-winning discovery of U of T’s Frederick Banting, Charles Best, John Macleod and Bertram Collip.

The university has stewarded the fund in the years since, awarding more than $100 million to U of T researchers. Today, the fund invests $4 million annually in emerging and established scholars from the full spectrum of research and scholarship through U of T.