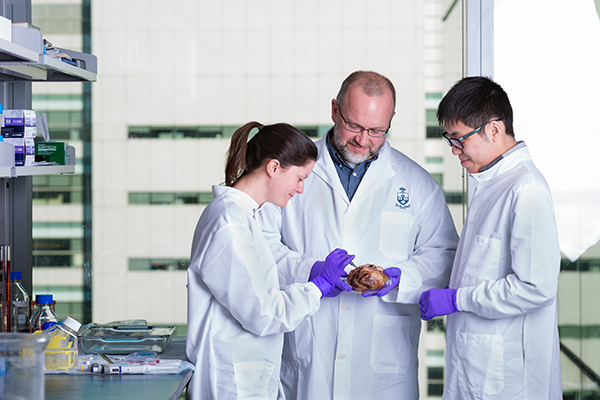 March 14, 2017
Professor Craig Simmons (MIE, IBBME, at centre) encourages his students to test their hypotheses in the lab and make original research contributions. “Training students is the way the University has our biggest and most immediate impact," he says. (Credit: Neil Ta)

When undergraduate engineering students wanted to know whether vibrating a cell would change its properties, Professor Craig Simmons let them use his latest lab technology to test their hypothesis. “They were doing something new!” he says. “It was a research project I could see myself conducting in my own lab.”

For the innovative ways that he introduces undergraduate students to cutting-edge science, Craig Simmons, a professor in the Department of Mechanical & Industrial Engineering and Institute of Biomaterials & Biomedical Engineering, has been awarded the 2017 Northrop Frye Award in the Individual Category. The $2,000 prize recognizes faculty excellence in linking teaching and research.

When Simmons took labs as a student, he felt like he was checking off tasks without really knowing why he was doing each one. Now that he’s a professor, he has listened to students with similar laments and come up with innovative lab programs that actually make the students feel like real scientists from day one.

Simmons, who is the U of T Distinguished Professor in Mechanobiology and scientific director of the Translational Biology and Engineering Program, is an award-winning engineer who has made headlines for his innovative research into heart health and tissue engineering. Since he came to U of T in 2005, he’s discovered how the mechanical stimulation of flowing blood causes heart tissue to calcify, has invented biomaterials that permit safer drug testing, and discovered a way to stimulate stem cells mechanically in order to enhance bone formation. He’s considered a world leader in the field.

Teaching students about cell mechanics has unique challenges, he says. “Cells are too small to see normally, and students found the material too abstract – they just didn’t have a physical understanding of what I was talking about.” As well as letting his students get hands-on with real cells and research-grade equipment, he helped make the subject come alive by doing away with lab reports. Instead of stressing over getting the “right” answers, Simmons’s students see first-hand the difference between models and reality – how biological systems work in the real world.

Simmons also gives his undergraduates opportunities to make original contributions. They all do a group project, where they define a problem themselves, starting with a written proposal modelled on real grant proposals or grad school applications. After intensive feedback from Simmons and teaching assistants, the students then run their experiments.

“In those cases, they are making original contributions,” he says, “discovering new things, or adding to existing knowledge. They’re right at the cusp of that interface between doing controlled labs will have clear outcomes, and the unknown. And that is what makes their labs a little exciting!”

As well as innovating in the lab, Simmons revised U of T’s Biomedical Systems Engineering curriculum, giving it a clear scope and focus. Peers say the resulting program is of the calibre seen at MIT and Johns Hopkins universities, and is one of the top programs worldwide. The goal, Simmons says, “was to make it more focused on quantitative biology, on understanding biological systems from an engineering perspective across multiple scales, from nano- to whole-body.”

Students couldn’t be more enthusiastic. Simmons’ labs buzz with energy, they say, and they feel confident in asking questions, passionate about their subject, and well-grounded in the essential skill of learning how to learn. Many of Simmons’ mentees have won prestigious prizes. Last year, undergrads under his supervision won the 2016 IBBME Scientific Day Best Clinical Engineering Poster, beating graduate student teams, for designing a prosthetic hand for infants.

Simmons genuinely cares about his students’ success. “In my mind,” he says, “training students is the way the University has our biggest and most immediate impact. Our research impact is longer-term, but the scientists and engineers we help train will go out and themselves have impact.”

The Northrop Frye Awards, one awarded to an individual faculty member and one to a department or division, are presented each year under the banner of the Awards of Excellence, a program recognizing the outstanding members of the University of Toronto community who have made rich and meaningful contributions to the University, their communities and to the world.

Simmons and the other 2017 Awards of Excellence recipients will be honoured at a recognition event on April 27.