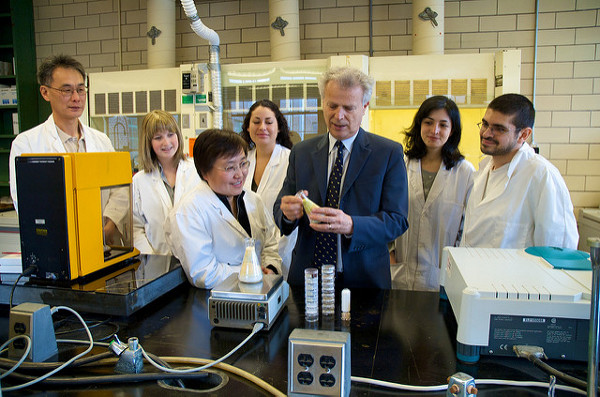 February 13, 2017
Professor Levente Diosady (centre) and his team developed a way to fortify salt with both iron and iodine. The product is now being distributed to more than 24 million people in India’s Uttar Pradesh state. (Photo: Mark Balson)
Human Health

Double-fortified salt (DFS) is now being distributed to 4.6 million families — representing more than 24 million people — in the state of Uttar Pradesh, India. The product, developed at U of T Engineering, provides a simple, effective way to add iron in the diets of people who don’t currently get enough.

“We’re very excited to see our invention being distributed on such a massive scale” says Professor Levente Diosady (ChemE), who specializes in food engineering. “The opportunity for engineers to make a difference in the lives of people living with malnutrition is incredible.”

More than twenty years ago, Diosady was approached by Venkatesh Mannar, then a senior advisor to UNICEF, who wanted him to do some simple chemical tests on formulations for double fortified salt. Mannar’s mission was to address deficiencies in micronutrients, vitamins and minerals needed in small but regular amounts by the human body. Lack of these nutrients can reduce overall health, with huge personal and economic impact worldwide.

Perhaps the biggest success story in the micronutrient world is iodized salt. Many governments around the world have mandated the enrichment of salt — an inexpensive food item consumed regularly by all people — with iodine as a means to ensure that nutritional needs are met. “Venkatesh was born into a salt-producing family, and he knew how well iodized salt was working in places where it had been tried,” says Diosady. “He wanted to see if we could do the same with iron.”

Iron deficiency leads to anemia, a condition that leaves people feeling tired and weak, making it harder to work or study. According to the World Health Organization, iron deficiency is currently the most common and widespread nutritional disorder in the world, affecting more than two billion people, and a major contributor to maternal mortality. But Diosady’s tests showed why iron couldn’t be added to salt in the same way as iodine: the two elements reacted with each other, converting the iodine into a form that simply evaporated away.

Undeterred, Diosady and his team began developing a method for encapsulating the iron so that it wouldn’t react with the iodine. Eventually, they packaged ferrous fumarate, an iron-rich compound, into tiny edible particles that look and feel nearly identical to salt grains, and which dissolve when consumed. These particles enabled the iron to be mixed with iodized salt, resulting in a double-fortified product.

Soon after, Mannar joined the new Micronutrient Initiative as its president, and continued to work with the U of T food engineers on programs that proved the acceptability, safety and effectiveness of DFS. The results of early trials showed a significant reduction in rates of anemia among children who received DFS as part of their school meals.

Today DFS produced in the Indian State of Tamil Nadu is being added to school lunches provided to more than five million children in the state, through a program supported by the Canadian International Development Agency.

The expansion of the project to Uttar Pradesh State was a much larger undertaking, requiring even further scale-up of manufacturing. U of T Engineering, through a grant agreement from Canada’s International Development Research Centre, is supporting the transfer of technology to India and scale up and roll out of the product in Uttar Pradesh. Diosady and Mannar (who is now an adjunct professor at U of T) are co-investigators on the project.

“When we started, we were producing 100 grams at a time in the lab,” says Diosady. “The first order from Uttar Pradesh for the month of January 2017 alone is for 6000 tonnes.” The Tata Trusts, India’s largest charitable foundation, is supporting the state government to procure and distribute the product, while the government of Uttar Pradesh is spending more than $40 million to purchase the salt and make it available to low income consumers at subsidized prices. The Bill & Melinda Gates Foundation is funding a comprehensive evaluation of the effectiveness of the project in reducing iron and iodine deficiencies across the population.

Meanwhile, Diosady and his team have continued their research. They are developing ways to encapsulate other micronutrients, such as folic acid and vitamin B12, with the hopes of making a quadruple-fortified salt. They are also working on adding iron to tea. “Tea, like salt, is widely consumed in predictable amounts in India, and South Asia” says Diosady. “If we can get an iron-fortified tea into the hands of every tea-seller, there is the potential for a very beneficial health effect.”