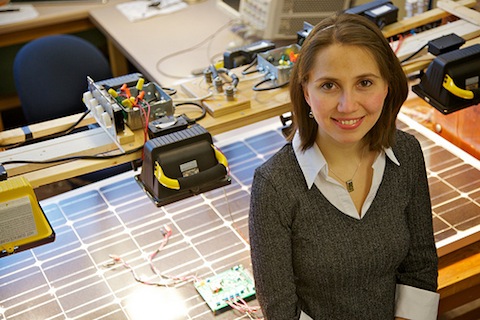 Audrey Kertesz, an ECE student in her first year of graduate studies and specializing in control theory, received the 2010 André Hamer Postgraduate Prize from the Natural Sciences and Engineering Research Council of Canada (NSERC) in Ottawa on Monday, February 14th. Roberto Morandotti, an ECE post-doctoral fellow in 2002-2003 who is now a professor in the Institut national de la recherche scientifique in Montreal, received an E.W.R. Steacie Memorial Fellowship.

Kertesz plans to research ways to improve the efficiency of urban-based solar panel arrays by designing better control systems. Following an NSERC press conference at the Museum of Science and Technology—at which the Honourable Tony Clement, Minister of Industry, announced the awards—Kertesz said her win felt “extraordinary. I feel very out of place and hugely honoured to be surrounded by this group,” which included University of Toronto computer scientist Geoffrey Hinton as the Gerhard Herzberg Canada Gold Medallist for Science and Engineering.

“It’s very much an honour,” Kertesz added, “and I hope with my research that I can live up to it.”

In the quest to generate clean, inexpensive solar energy, installations of photovoltaic (PV) systems on the roofs of homes and other urban locations are on the rise. Most hardware, however, is designed to work with the uniform light levels more typically found in rural areas, meaning urban installations don’t perform as well as they could.

Solar installations rely on switched-mode converters to transform the voltage and current being produced so the system harvests as much energy as possible. These are in turn controlled by a maximum power point tracker.

For PV systems that can count on uniform light levels, one control can do the job for an entire array. Efficiency drops when different parts of the array are partially shaded by trees or neighbouring buildings at certain times of day.

Kertesz’s research will tackle the problem by setting up a distributed control system, where individual panels may have one or even several dedicated controls. Local controllers would perform optimization for their panel, while simultaneously ensuring that the voltage and current they output is compatible with the rest of the installation. The end result: a system that operates at peak efficiency and an increased supply of renewable energy.

Kertesz graduated from the University of Calgary in 2010 with a BSc in Electrical Engineering, and on graduation received the Governor General’s Silver Medal, the Faculty Gold Medal in Engineering, and the Muriel Kovitz prize for the highest grade-point average across the university. Now working in the Systems Control Group of The Edward S. Rogers Sr. Department of Electrical & Computer Engineering, Kertesz expects to receive an MASc in 2012. Her supervisors are Professors Bruce Francis (MechE 6T9, MEng 7T1, ElecE 7T5) and Olivier Trescases (ElecE 0T2, MASc 0T4, PhD 0T7).

“We are extremely proud of Audrey Kertesz’s achievements and prowess as a scholar, which NSERC has acknowledged with this prestigious award,” said Cristina Amon, Dean, Faculty of Applied Science & Engineering. “We look forward to celebrating her continued success.”

Roberto Morandotti received one of six Steacie Fellowships for his research into transmitting electronic information with unbreachable security. His new technology, based on high-performance integrated non-linear devices, aims to put theory into practice by transmitting pairs of light particles, called entangled photons, through existing optical networks.

Professor Morandotti studied twice with Engineering’s Vice-Dean, Research Stewart Aitchison: for his post-doctoral fellowship in ECE in 2002-2003, and at the University of Glasgow for his PhD in electrical engineering, which he received in 1999.

NSERC honorees were presented with their awards by Governor General David Johnson at a ceremony and reception at Rideau Hall in Ottawa on Monday evening.

Click here to view photos of Audrey Kertesz, and her video interview with NSERC.