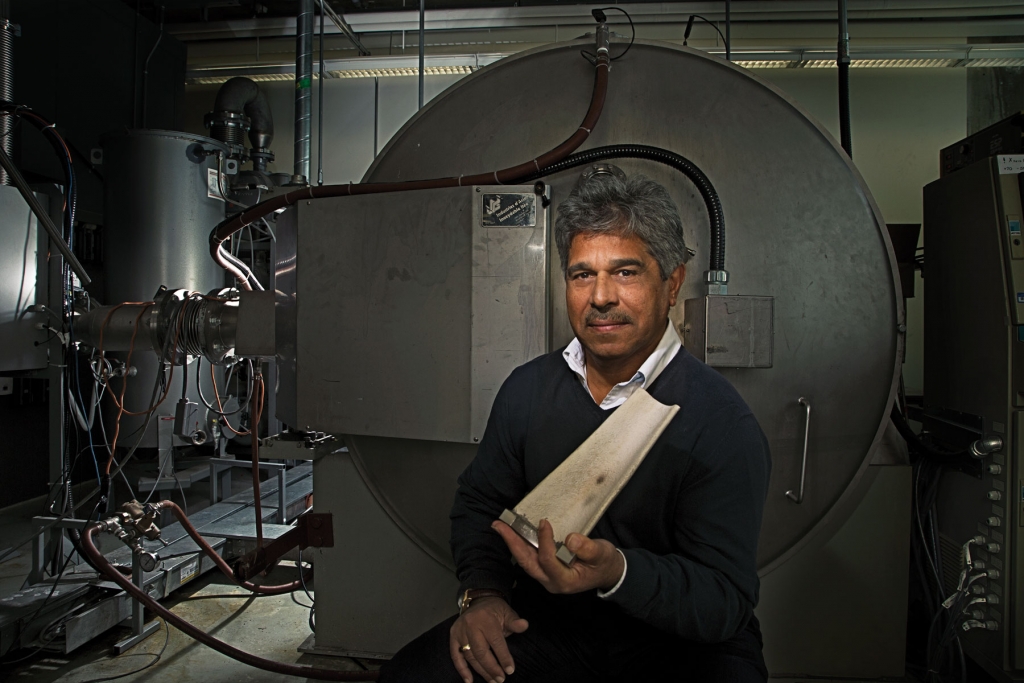 May 22, 2015
Professor Javad Mostaghimi holding a piece of foam shaped like a turbine blade. The foam has been coated with zirconia — a thermal barrier. Air can flow through the foam and cool the blade so that it can withstand temperatures greater than 1000C (Photo: Rob Waymen).
Advanced Manufacturing

Originally published in the Spring 2015 issue of Edge Magazine.

Have you ever been on a plane and marvelled over the fact that a 400-ton hunk of metal can get off the ground? As you peered out the window at the wing flaps, you probably thought about how the miracle of flight has something to do with the laws of physics. Or maybe, temporarily deafened by the roar of the jet, you credit the internal combustion engine.

All that may be true, but you also have something else to thank for getting you safely and speedily to your destination: coating.

The landing gear, the engine, even the windshield wipers — everything is coated with substances to allow the plane and its parts to withstand heat, fight corrosion and repel water.

It’s true in daily life, too. Your enamelled bathtub, your non-stick pan, your eyeglasses, even the paint on your walls — coatings are all around you. And their manufacture is a multi-billion dollar industry that is constantly innovating to create products that improve performance while protecting health and the environment.

For 20-plus years, mechanical engineering professor Javad Mostaghimi (MIE) and his colleagues at the Centre for Advanced Coating Technologies have been conducting basic research into how coatings work and testing and developing new coatings as well as technologies for applying them.

Coating, says Mostaghimi, used to be more of an art. His group is bringing scientific rigour to the field.

“The basic, fundamental building block of coating is the impact of droplets on surfaces,” he says, so his team models and photographs what happens when droplets hit surfaces.

But, he says, “this is a technology that should be applied.”

And apply it they do, working with industrial partners to solve problems and improve processes. Based out of a lab packed full of various machines and tools to test different sprays and surfaces, they have undertaken all kinds of challenges, including:

Coating, says Mostaghimi, may be invisible in most cases, but that’s just because it’s “an enabling technology.”

In other words, you don’t notice it because it’s doing its job.