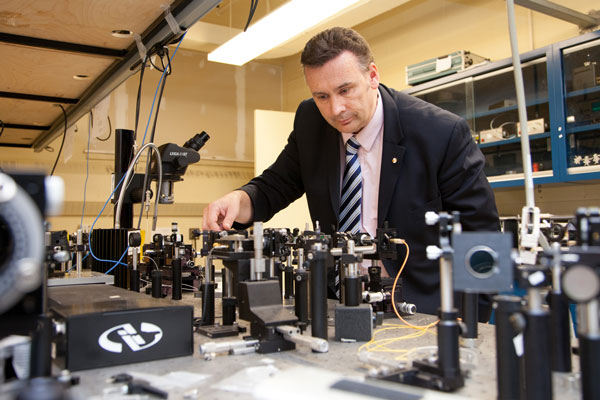 “I am delighted that OSPE and PEO have recognized these outstanding U of T engineers for their accomplishments, their leadership and their service to the profession and to the community,” said Dean Cristina Amon. “These prestigious awards are a testament to the wide-ranging and meaningful contributions made by our faculty and alumni in all aspects of engineering and beyond.”

Professor Stewart Aitchison is a world leader in the field of nonlinear optics, particularly the area of spatial optical solitons. His pioneering research has led to the creation of new all-optical devices for signal processing applications, the demonstration of “the world’s fastest switch,” and the development of new types of light sources. Increasingly focused on developing point-of-care technologies, Aitchison has created an HIV monitoring system that can give a test result in 10 to 15 minutes. In 2009 he co-founded ChipCare Corporation to commercialize this technology. Aitchison is a fellow of the Royal Society of Canada, the American Association for the Advancement of Science, the Optical Society of America and the Institute of Physics, and a corresponding fellow of the Royal Society of Edinburgh.

In 1998 Professor Vaughn Betz co-founded Right Track CAD to commercialize his doctoral research (in partnership with Jonathan Rose (ECE), his PhD supervisor). This startup pioneered a new architecture and design method for a class of programmable computer chips called Field-Programmable Gate Arrays (FPGAs). In 2000, Right Track CAD was acquired by one of its customers, Altera Corporation. Betz held several leadership positions within Altera before joining U of T in 2011. He led the development of Altera’s FPGA chips and was one of the key architects of Altera’s Quartus II Computer-Aided Design System, used daily by tens of thousands of design engineers worldwide. Betz has mentored many young engineers at Altera and U of T, and has established engineering scholarships in Ontario and Manitoba.

George Anders is president of Anders Consulting, a professor at the Technical University of Lodz, and an adjunct professor in ECE. From 1975-2012, he worked with Ontario Hydro and its successor companies on the development of power cable calculation methods and the development and application of advanced techniques in power system analysis and design. Anders is a Canadian representative and co-convener of Working Group 19 of the International Electrotechnical Commission, which develops new computational techniques and new standards for power cable ampacity computations. He is a fellow of the Institute of Electrical and Electronics Engineers (IEEE) and received the 2016 IEEE Halperin Award in Transmission and Distribution.

As Canada Research Chair in Micro and Nanodevices at the University of Waterloo, John Yeow is developing nanodevices and highly selective sensors that will help create new medical instruments for diagnosing and treating disease. He is designing a miniaturized catheter device for in vivo body imaging which could assist in the early detection of diseases such as cancer. Yeow is also developing miniature radiation instruments and sensors for cancer treatment that will allow for a more focused, yet less invasive, delivery of radiation treatment, as well as real-time measurement of the delivered dose. Yeow is a fellow of the Engineering Institute of Canada and received the Ontario Professional Engineers Young Engineer Award in 2008.

After obtaining her PhD in Chemical Engineering from U of T, Valerie Davidson had a distinguished academic career at the University of Guelph, where she held the NSERC Chair for Women in Science and Engineering from 2003-2011. In this role, she spearheaded the creation of the Ontario Network of Women in Engineering (ONWiE), which includes all schools and faculties of engineering across Ontario. ONWie has created programs such as Go ENG Girl, in which elementary and high school girls visit university campuses to learn about engineering, and Go CODE Girl, which introduces girls to coding and software development. In 2002, Davidson received the Award for the Support of Women in the Engineering Profession from the Canadian Council of Professional Engineers (now Engineers Canada).

As Chief Information Officer of Tridel Corporation, Ted Maulucci leverages his high profile to help engineering programs gain access to industry resources and to help researchers form commercialization partnerships. In 2009, Maulucci co-founded One Million Acts of Innovation, which promotes Canadian innovation. In partnership with this group and the Information and Communications Technology Council, he created the “Coach to Career” program to help new Canadians establish their careers. Maulucci is chair of the Entrepreneurs in Residence Committee at the Toronto Rehabilitation Institute, which helps researchers commercialize healthcare products. Here at U of T, he is a member of the Industry Advisory Board for MIE. Maulucci received a Queen Elizabeth II Diamond Jubilee Medal in 2013.

After a stellar 24-year career at Falconbridge, Larry Seeley led the development of Lakefield Research Ltd. into the largest commercial metallurgical research and development organization in the world, then founded Recapture Metals, which recycled metals for use in a number of industries. A champion of education, he has served on the Board of Governors of Cambrian College, Trent University and the University of Ontario Institute of Technology, and was chair of the Advisory Board for ChemE for five years. Seeley has served as president of the Canadian Society for Chemical Engineering and the Canadian Metallurgical Society. He is a fellow of the Canadian Institute of Mining, Metallurgy and Petroleum, the Engineering Institute of Canada and the Canadian Academy of Engineering, and was inducted into the Engineering Hall of Distinction in 2006.