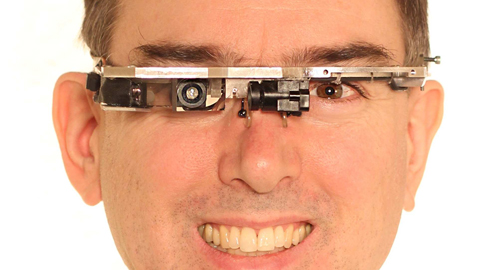 Professor Steve Mann with his EyeTap system.">Click to read the photo caption

Two of the 12 speakers chosen to present at TEDxToronto this fall are U of T Engineering professors.

Professor Steve Mann (ECE), widely recognized as the father of wearable computing and inventor of the concept of ‘sousveillance’, will speak about his quest to “understand the world in more than one way” through technology. For more than 35 years Mann has been wearing some version of his EyeTap Digital Eye Glass system, an ever-evolving glasses-like set that allows him to ‘augmediate’ his reality, both adding and subtracting information. “Now I see through that glass into the future: a future where the boundaries between cyborg space and the real world will disappear,” he says.

Professor Brendan Frey (ECE) unravels genetic mysteries using scientific and engineering tools such as machine learning. Frey and his group developed a computer program to simulate how cells use “genetic recipes” to create mind-boggling complexity from a limited number of genes. Says Frey, “Deciphering these genetic recipes may unlock unique aspects of the human brain and provide a way to detect and treat human genetic disease.” He has held the Canada Research Chair in Information Processing and Machine Learning since 2007.

TEDxToronto, now in its fifth year, is Canada’s largest TED event. TEDx is a program of local, self-organized events aimed to propagate the core TED concept of ‘ideas worth spreading’. The theme of this year’s TEDxToronto is ‘The Choices We Make’, after Jean Paul Sartre’s famous quote that “We are our choices.”

Each speaker is featured in a compelling preview video ahead of the conference opening Sept. 26, 2013 at the Royal Conservatory of Music’s Koerner Hall.